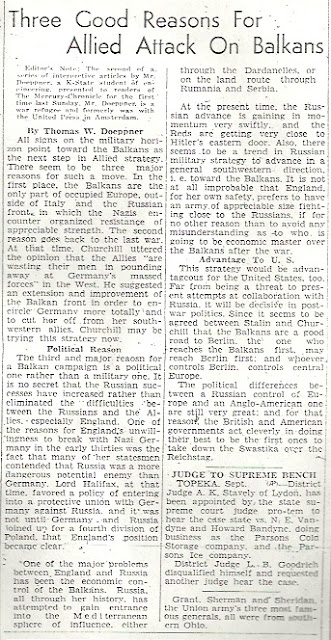 Article by Opa for the Mercury Chronicle Newspaper

Editor's Note: The second of a series of interpretive articles by Mr. Doeppner, a K-State student of engineering, presented to readers of The Mercury Chronicle for the first time last Sunday. Mr. Doeppner is a war refugee and formerly was with the United Press in Amsterdam.

All signs on the military horizon point toward the Balkans as the next step in Allied strategy. There seem to be three major reasons for such a move. In the first place, the Balkans are the only part of occupied Europe, outside of Italy and the Russian front, in which the Nazis encounter organized resistance of appreciable strength. The second reason goes back to the last war. At that time, Churchill uttered the opinion that the Allies "are wasting their men in pounding away at Germany's massed forces" in the West. He suggested an extension and improvement of the Balkan front in order to encircle Germany more totally and to cut her off from her southwestern allies. Churchill may be trying this strategy now.

The third and major reason for a Balkan campaign is a political rather than a military one. It is no secret that the Russian successes have increased rather than eliminated the difficulties between the Russians and the Allies, especially England. One of the reasons for England's unwillingness to break with Nazi Germany in the early thirties was the fact that many of her statesmen contended that Russia was a more dangerous potential enemy than Germany. Lord Halifax, at that time, favored a policy of entering into a protective union with Germany against Russia, and it was not until Germany and Russia joined up for a fourth division of Poland, that England's position became clear.

One of the major problems between England and Russia has been the economic control of the Balkans. Russia, all through her history, has attempted to gain entrance into the Mediterranean sphere of influence, either through the Dardanelles, or on the land route through Rumania and Serbia.

At the present time, the Russian advance is gaining in momentum very swiftly, and the Reds are getting very close to Hitler's eastern door. Also, there seems to be a trend in Russian military strategy to advance in a general southwestern direction, i.e. toward the Balkans. It is not at all improbable that England, for her own safety, prefers to have an army of appreciable size fighting close to the Russians, if for no other reason than to avoid any misunderstanding as to who is going to be economic master over the Balkans after the war.

This strategy would be advantageous for the United States., too. Far from being a threat to present attempts at collaboration with Russia, it will be decisive in post-war politics. Since it seems agreed between Stalin and Churchill that the Balkans are a good road to Berlin, the one who reaches the Balkans first, may reach Berlin first: and whoever controls Berlin, controls central Europe.

The political differences between a Russian control of Europe and an Anglo-American one are still very great: and for that reason, the British and American governments act cleverly in doing their best to be the first ones to take down the Swastika over the Reichstag.

My history teacher my senior year of high school was one of the best history teachers I had. He used a phrase to describe the Balkans (I'm sure he borrowed it but I can't remember the source): "the powder keg of Europe." And more and more I can see how and why this is true. Nothing gets things moving between Europe and Russia and other countries on the European continent like something shaking in the Balkans. That was the first thing I thought of when I started reading this analysis of Opa's.

I wonder again if Opa's thoughts are sort of par for the course and obvious to the casual war-observer, or if they are particularly astute and insightful. I see them as being pretty spot on, but maybe everyone already knew this? The political analysis of the relationship between Russia and England and the US is very accurate. We know, post Cold War (and sheesh- currently) that the friendship with Russia by the West has always been a fragile one. I think it is interesting to note that England was considering an alliance with Germany against Russia when the alliance of Germany and Russia made the question moot. We know as students of history that the race to Berlin was definitely a thing. The unfortunate and long division of Germany after the war was a direct result of this competition and incongruent governing styles. (To say "style" puts it a little too mildly, but I'm too lazy to find a better word right now.)

It is a bit of a miracle that Russia and the rest of the Allies were able to work together in the war effort at all, considering they were never really on the same side. But without Russia, I can't imagine that the Allies would have had victory, or at least not as soon. Russia is a very strange entity. They sacrifice far more than they ever get, and they are far stronger than they seem, and yet they keep falling into dictatorship after dictatorship that keeps their potential from flourishing. What would a truly free Russia be able to do? I can't imagine.

So the war analysis of Opa's is at least for me very insightful, because it rings true for me of the time in 1943, but also sheds light on a lot of what happened after. Even to today. Russia and America in particular have always had a rivalry of sorts, and will work together if and only if it helps themselves.

Russia has always been a political challenge.
Posted by Sarah Snow at Friday, October 27, 2017