October, 1943: The Klystron and Rhumbatrons 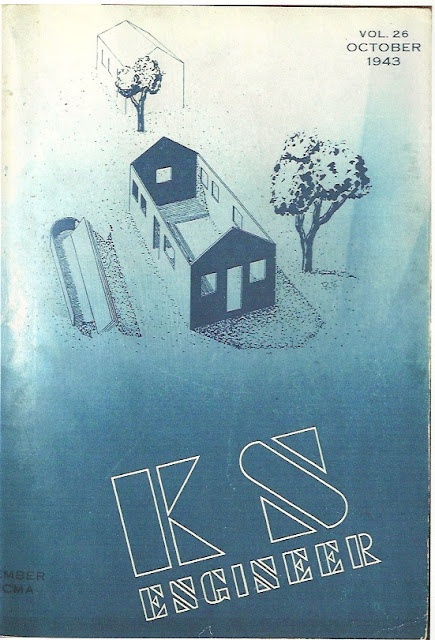 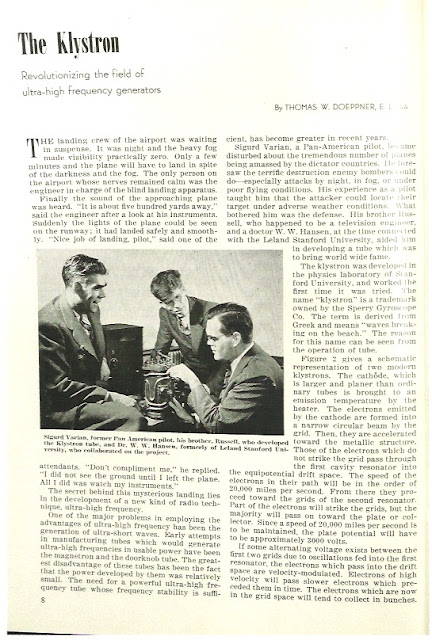 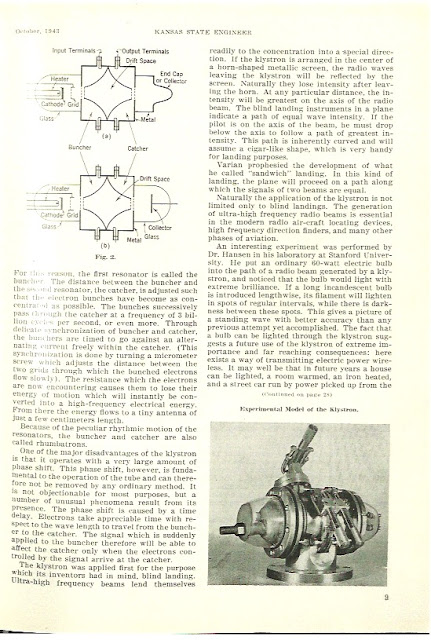 The landing crew of the airport was waiting in suspense. It was night and the heavy fog made visibility practically zero. Only a few minutes and the plane will have to land in spite of the darkness and the fog. The only person on the  airport whose nerves remained calm was the engineer in charge of the blind landing apparatus.

Finally the sound of the approaching plane was heard. "It is about five hundred yards away." said the engineer after a look at his instruments. Suddenly the lights of the plane could be seen on the runway; it had landed safely and smoothly. "Nice job of landing pilot," said one of the attendants. "Don't compliment me," he replied. "I did not see the ground until I left the plane. All I did was watch my instruments."

The secret behind this mysterious landing lies in the development of a new kind of radio technology, ultra-high frequency.

Sigurd Varian, a Pan-American Pilot, became disturbed about the tremendous number of planes being amassed by the dictator countries. He foresaw the terrific destruction enemy bombers could do - especially attacks by night, in fog, or under poor flying conditions. His experience as a pilot taught him that the attacker could locate their target under adverse weather conditions. What bothered him was the defense. His brother Russell, who happened to be a television engineer, and a doctor W.W. Hansen, at the time connected with the Leland Stanford University, aided him in developing a tube which was to bring world wide fame.

The klystron was developed in physics laboratory of Stanford University, and worked the first time it was tried. The name "klystron" is a trademark owned by the Sperry Gyroscope Co. The term is derived from Greek and means "waves breaking on the beach." The reason for this name can be seen from the operation of tube.

Figure 2 gives a schematic representation of two modern klystrons. The cathode, which is larger and planer than ordinary tubes is brought to an emission temperature by the heater. The electrons emitted by the cathode are formed into a narrow circular beam by the grid. Then, they are accelerated toward the metallic structure. Those of the electrons which do not strike the grid pass through the equipotential drift space. The speed of the electrons in their path will be in the other of 20,000 miles per second. From there they proceed toward the grids of the second resonator. Part of the electrons will strike the grids, but the majority will pass on toward the plate or collector. Since a speed of 20,000 miles per second is to be maintained, the plate potential will have to be approximately 3000 volts.

For this reason, the first resonator is called the buncher. The distance between the buncher and the second resonator, the catcher, is adjusted such that the electron bunches have become as concentrated as possible. The bunches successively pass through the catcher at a frequency of 3 billion cycles per second, or even more. Through delicate synchronization of bunches and catcher, the bunches are timed to go against an alternating current freely within the catcher. (This synchronization is done by turning a micrometer screw which adjusts the distance between the two grids through which the bunched electrons flow slowly.) The resistance which the electrons are now encountering causes them to lose their energy of motion which will instantly be converted into a high-frequency electrical energy. From there the energy flows to a tiny antenna of just a few centimeters length.

Because of the peculiar rhythmic motion of the resonators, the buncher and catcher are also called rhumbatrons.

One of the major disadvantages of the keystone is that it operates with a very large amount of phase shift. This phase shift, however, is fundamental to the operation of the tube and can therefore not be removed by any ordinary method. It is not objectionable for most purposes, but a number of unusual phenomena result from its presence. The phase shift is caused by a time delay. Electrons take appreciable time with respect to the wave length to travel from the buncher to the catcher. The signal which is suddenly applied to the buncher therefore will be able to affect the catcher only when the electrons controlled by the signal arrive at the catcher.

The klystron was applied first for the purpose which its inventors had in mind, blind landing. Ultra-high frequency beams lend themselves readily to the concentration into a special direction. If the klystron is arranged in the center of a horn-shaped metallic screen, the radio waves leaving the klystron will be reflected by the screen. Naturally they lose intensity after leaving the horn. At any particular distance, the intensity will be greatest on the axis of the radio beam. The blind landing instruments in a plane indicate a path of equal wave intensity. If the pilot is on the axis of the beam, he must drop below the axis to follow a path of greatest intensity. This path is inherently curved and will assume a cigar-like shape, which is very handy for landing purposes.

Varian prophesied the development of what he called "sandwich" landing. In this kind of landing, the plane will proceed on a path long which the signal of two beams are equal.

Naturally the application of the klystron is not limited only to blind landings. The generation of ultra-high frequency radio beams is essential in the modern radio air-craft locating devices, high frequency direction direction finders, and many other phases of aviation.

An interesting experiment was performed by Dr. Hansen in his laboratory at Stanford University. He put an ordinary 60-watt electric bulb into the path of a radio beam generated by a klystron, and noticed that the bulb would light with extreme brilliance. If a long incandescent bulb is introduced lengthwise, its filament will lighten in spots of regular intervals, while there is darkness between these spots. This gives a picture of a standing wave with better accuracy than any previous attempt yet accomplished. The fact that a bulb can be lighted through the klystron suggests a future use of the klystron of extreme importance and far reaching consequences: here exists a way of transmitting electric power wireless. It may well be that in future years a house can be lighted, a room warned, an iron heated, and a street car run by power picked up from the ....

My apologies for cutting the article off short- we did not grab that last part on page 28.

This article tells me a few things: 1) I still don't want to be an engineer. 2) I think engineers need some help with their naming game. "Buncher" and "Catcher" surely could have been more creatively named. Although I do enjoy the rhumbatron name-  I know it's a mathematical term but it made me think of those transformer machine things. 3) Opa did a decent job considering he wasn't able to write about the  radar he wanted to. And he did this for fun?

So here's to all you engineers out there- I will say that I am ever grateful for you and your desire to make things. I have no interest in the process, but I am fascinated by the outcome. Also- after a cursory glance at the internet search- it seems like the klystron has been used for lots of things. However, we do not have the reality of houses powered by these generators. Wireless power is still a future to hope for. Come on you engineers! Get cracking!