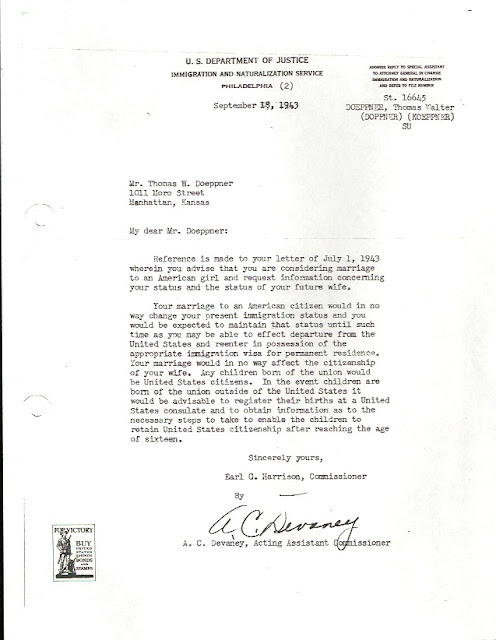 Letter from INS to Opa

Reference is made to your letter of July 1, 1943 wherein you advise that you are considering marriage to an American girl and request information concerning your status and the status of your future wife.

Your marriage to an American citizen would in no way change your present immigration status and you would be expected to maintain that status until such a time as you may be able to effect departure from the United States and reenter in possession of the appropriate immigration visa for permanent residence. Your marriage would in no way affect the citizenship of your wife. Any children born of the union would be United States citizens. In the event children are born of the union outside of the United States it would be advisable to register their births at a United States consulate and to obtain information as to the necessary steps to take to enable the children to retain United States citizenship after reaching the age of sixteen.

This also makes me wonder- we hear a lot about "green card" marriages, but it sounds like it isn't as simple as marrying someone and becoming a citizen. I don't know how vast the whole green-card marriage practice is, but I wonder if it isn't as easy as we think. I mean, I think the one thing I have learned through all this is that immigration is anything but easy!