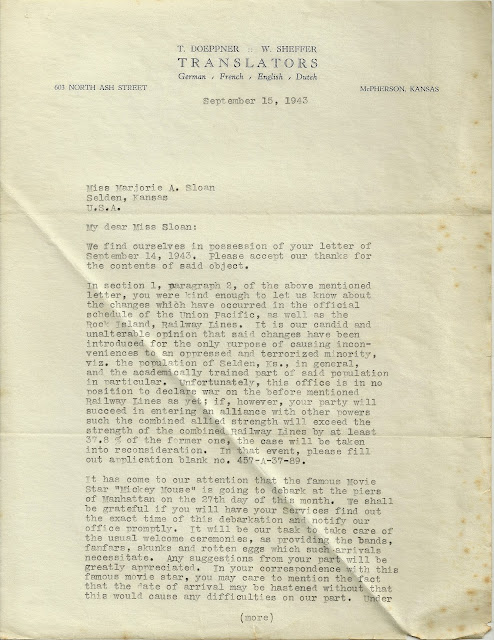 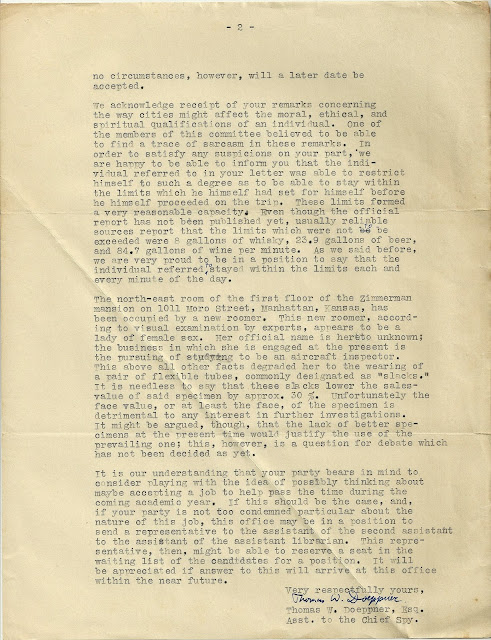 We find ourselves in possession of your letter of September 14, 1943. Please accept our thanks for the contents of said object.

In section 1, paragraph 2, of the above mentioned letter, you were kind enough to let us know about the changes which have occurred in the official schedule of the Union Pacific, as well as the Rock Island, Railway Lines. It is our candid and unalterable opinion that said changes have been introduced for the only purpose of causing inconveniences to an oppressed and terrorized minority, viz. the population of Selden, Ks., in general, and the academically trained part of said population in particular. Unfortunately, this office is in no position to declare war on the before mentioned Railway Lines as yet; if, however, your party will succeed in entering an alliance with other powers such the combined allied strength will exceed the strength of the combined Railway Lines by at least 37.8% of the former one, the case will be taken into reconsideration. In that event, please fill out application blank no. 457-A-37-89.

It has come to our attention that the famous Movie Star "Mickey Mouse" is going to debark at the piers of Manhattan on the 27th day of this month. We shall be grateful if you will have your Services find out the exact time of this debarkation and notify our office promptly. It will be our task to take care of the usual welcome ceremonies, as providing the bands, fanfare, skunks and rotten eggs which such arrivals necessitate. Any suggestions from your part will be greatly appreciated. In your correspondence with this famous movie star, you may care to mention the fact that the date of arrival may be hastened without that this would cause any difficulties on our part. Under no circumstances, however, will a later date be accepted.

We acknowledge receipt of your remarks concerning the way cities might affect the moral, ethical, and spiritual qualifications of an individual. One of the members of this committee believed to be able to find a trace of sarcasm in these remarks. In order to satisfy any suspicions on your part, we are happy to be able to inform you that the individual referred to in your letter was able to restrict himself to such a degree as to be able to stay within the limits which he himself had set for himself before he himself proceeded on the trip. These limits formed a very reasonable capacity. Even though the official report has not been published yet, usually reliable sources report that the limits which were not to be exceeded were 8 gallons of whiskey, 23.9 gallons of beer, and 84.7 gallons of wine per minute. As we said before, we are very proud to be in a position to say that the individual referred to stayed within the limits each minute of the day.

This north-east room of the first floor of the Zimmerman mansion on 1011 Moro Street, Manhattan, Kansas, has been occupied by a new roomer. This new roomer, according to visual examination by experts, appears to be a lady of female sex. Her official name is hereto unknown; the business in which she is engaged at the present is the pursuing of studying to be an aircraft inspector. This above all degraded her to the wearing of a pair of flexible tubes, commonly designated as "slacks." It is needless to say that these slacks lower the sales-value of said specimen by approx. 30%. Unfortunately the face value, or at least the face, of the specimen is detrimental to any interest in further investigations. It might be argued, though, that the lack of better specimens at the present time would justify the use of the prevailing one; this, however, is a question for debate which has not been decided as yet.

It is our understanding that your party bears in mind to consider playing with the idea of possibly thinking about maybe accepting a job to help pass the time during the coming academic year. If this should be the case, and, if your party is not too condemned particular about the nature of this job, this office may be in a position to send a representative to the assistant of the second assistant to the assistant of the assistant librarian. This representative, then, might be able to reserve a seat in the waiting list of the candidates for a position. It will be appreciated if answer to this will arrive at this office within the near future.

Oh Opa. He kept his character throughout the entire letter, God bless him. I'm going to be honest- I was bored out of my mind with this shtick. It's cute, but I don't know if it's two pages cute.

The translation: Grandmother is due to arrive sooner rather than later, although Opa wishes sooner. A new girl moved in on the street and Opa doesn't think she's attractive. Grandmother made fun of Opa's affinity for big cities and perhaps teased that they were a bad influence. He responded with similar sarcasm. Grandmother is thinking about getting a job and Opa might be able to get her a gig with the library.

I think Opa is bored, wants Grandmother to just get there already and is giddy about it. So he wrote a long letter with too many words. He definitely didn't think I'd be scrutinizing it a lifetime later, so I won't give him too hard a time.