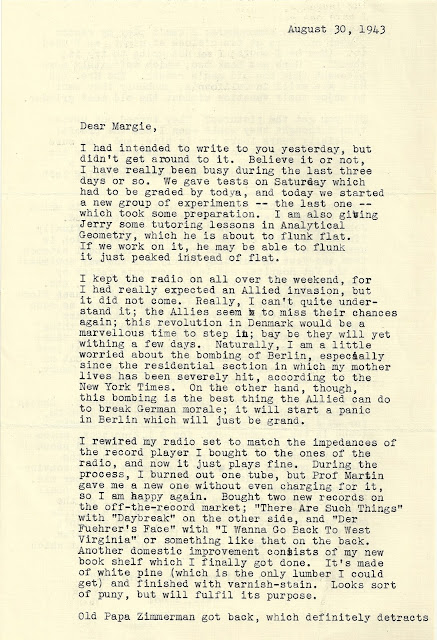 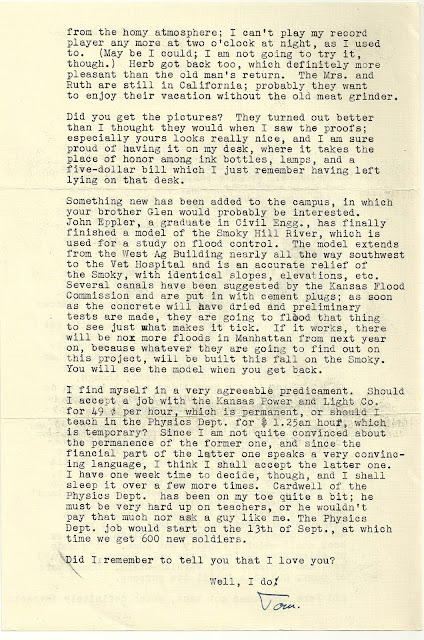 I had intended to write to you yesterday, but didn't get around to it. Believe it or not, I have really been busy during the last three days or  so. We gave tests on Saturday which had to be graded by today, and today we started a new group of experiments -- the last one -- which took some preparation. I am also giving Jerry some tutoring lessons in Analytical Geometry, which he is about to flunk flat. If we work on it, he may be able to flunk it just peaked instead of flat.

I kept the radio on all over the weekend, for I had really expected an Allied invasion, but it did not come. Really, I can't quite understand it; the Allies seem to miss their chances again; this revolution in Denmark would be a marvelous time to step in; maybe they will yet within a few days. Naturally, I am a little worried abut the bombing of Berlin, especially since the residential section in which my mother lives has been severely hit, according to the New York Times. On the other hand, though, this bombing is the best thing the Allied can do to break German morale; it will start a panic in Berlin which will just be grand.

I rewired my radio set to match the impedances of the record player I bought to the ones of the radio, and now it just plays fine. During the process, I burned out one tube, but Prof Martin gave me a new one without even charging for it, so I am happy again. Bought two new records on the off-the-record market; "There are Such Things" with "Daybreak" on the other side, and "Der Fuehrer's Face" with "I Wanna Go Back to West Virginia" or something like that on the back. Another domestic improvement consists of my new bookshelf which I finally got done. It's made of white pine (which is the only lumber I could get) and finished with varnish-stain. Looks sort of puny, but will fulfill its purpose.

Old Papa Zimmerman got back, which definitely detracts from the homey atmosphere; I can't play my record player any more at two o'clock at night, as I used to. (Maybe I could; I am not going to try it, though.) Herb got back too, which definitely more pleasant than the old man's return. The Mrs. and Ruth are still in California; probably they want to enjoy their vacation without the old meat grinder.

Did you get the pictures? They turned out better than I thought they would when I saw the proofs; especially yours looks really nice, and I am sure proud of having it on my desk, where it takes the place of honor among my ink bottles, lams, and a five-dollar bill which I just remember having left lying on that desk.

Something new has been added to the campus, in which your brother Glen would probably be interested. John Eppler, a graduate in Civil Engg., has finally finished a model of the Smoky Hill River, which is used for a study on flood control. The model extends from the West Ag building early all the way southwest to the Vet hospital and is an accurate relief of the Smoky, with identical slopes, elevations, etc. Several canals have been suggested by the Kansas Flood Commission and are put in with cement plugs; as soon as the concrete will have dried and preliminary tests are made, they are going to flood that thing to see just what makes it tick. If it works, there will be no more floods in Manhattan from next year on, because whatever they are going to find out on this project, will be built this fall on the Smoky. You will see the model when you get back.

I find myself in a very agreeable predicament. Should I accept a job with the Kansas Power and Light Co. for $0.49 per hour, which is permanent, or should I teach in the Physics Dept. for $1.25 an hour, which is temporary? Since I am not quite convinced about the permanence of the former one, and since the financial part of the latter one speaks a very convincing language, I think I shall accept the latter one. I have one week time to decide, though, and I shall sleep it over a few more times. Cardwell of the Physics Dept. has been on my toe quite a bit; he must be very hard up on teachers, or he wouldn't pay that much nor ask a guy like me. The Physics Dept. job would start n the 13th of Sept., at which time we get 600 new soldiers.

Did I remember to tell you that I love you?

This was a nice letter from Opa, where he seems to be in a good and optimistic mood. Grandmother is close to returning, it seems Archie didn't win her back (or at least we don't know anything yet), and Opa has job prospects! It's been a good week!

Opa cracked me up with his comment about his friend Jerry, who he is tutoring in hopes that he does not fail flat but rather  fail "peaked."

Opa's intuition and attention to the details of the war astound me. He was right, by the way, the Allies started their invasion of Italy in early September, just a few days after this letter. How did he know that was the next step? I'm curious if this was the sort of thing that everyone knew was coming and was also waiting for by the radio, or if Opa was particularly in tune to the movements of the war process. I'm sure there were folks who were sort of happily obvious to the whole scene, but for those who cared, where they able to watch the war like a movie, with accurate predictions about what might happen next?

This confronts me with the reality of how much "war" has changed. I know nothing about modern war and tactics. We Americans only ever hear when something goes decisively right or wrong. We hardly know who we are at war with. There is this feeling like war happens somewhere else, in secret, with little to no repercussions for my life. We're disconnected.

Opa's connection to the war front has a lot to do with his precious radio, to which he has made modifications. I have a friend at our church who supplied me with pictures and examples of what Opa's radio was like, and the tubes and connectors he used to get it in working order. I learned that even amateur radio folks had restrictions during war time on how they used their radios. It kinda reminds me of our current  hackers- people who can outsmart technology to get behind the scenes. I'm sure there were radio hackers in Opa's day, doing the same. Opa was so pleased to get a free radio part from Professor Martin. What a kind thing! I bet Prof. Martin understood what Opa was doing and took pity on the boy from Berlin, listening for news.

Before I move on to Opa's music choices, we need to pause for a brief history lesson. Opa mentions Denmark's revolution, and I had no idea what he was talking about. As you might remember, Denmark and the other Scandinavian countries were among the first to fall into German occupation during the wildly successful invasion of May 1940. I assumed that Denmark functioned like a lot of occupied countries during this time: sort of bowing to every wish of the Nazis in order to survive. But then I did a little research and I have got to say, I have a newfound respect for the Danish. Please, please, read this short article from the Holocaust Museum on hw Denmark managed to prevent the majority of their Jewish inhabitants from being deported, and even endeavored to save as many of those who were deported (even ones that weren't citizens!). Go read that, then come back...

Ok- so the music- I had to look up Der Fuhrer's Face- and it is basically a big fat middle finger (musically) to Der Fuhrer. Lovely. It's pretty mild though, but I'm sure satisfying to listen to when you're especially angry at him.

Opa pokes fun at Old Man Zimmerman, the man of the house who has returned in order to squash any of the late-night fun Opa might be having.

Opa tells Grandmother all about this model of the Smoky river, which sounds fascinating, but I do wonder if perhaps Grandmother responds to these detailed accounts of engineering feats the same way I do when my husband starts talking a tad too long about some leadership tactic or committee meeting. You care... but then you start to care a little less. Because it's boring.

Opa closes his letter with a fabulous predicament: he has two job offers! I'm trying to figure out if he is completely done with school or if these jobs are meant to happen while he is also finishing up his studies. I agree with his current leaning- go for the higher paid job. Usually permanence is a better gig, but the pay difference is so significant, and Opa has every bit of a reason not to trust anything labeled permanent.

I skipped over a part in the middle of Opa's letter because I wanted to end on it: Ella's safety. Opa in previous letters was wondering why the Allies don't bomb Berlin, as he saw that to be the most effective way to hurt German morale. Well, it seems the Allies were listening, because now they are bombing Berlin. Opa is faced with conflicting emotions. He knows this is the best thing to end the war. He also heard from the New York Times that Charlottenburg was one of the hardest hit, which is where his mother lives. This is before any easy communication, like we have on Facebook where we can mark ourselves as safe in an instant. Opa has to face this dichotomy throughout the entire war: rooting for the Allies  while also fearing for the lives of the people he knows and loves on the other side of the gun.

Will we get a Red Cross letter soon from Ella, where she is Marked as Safe?