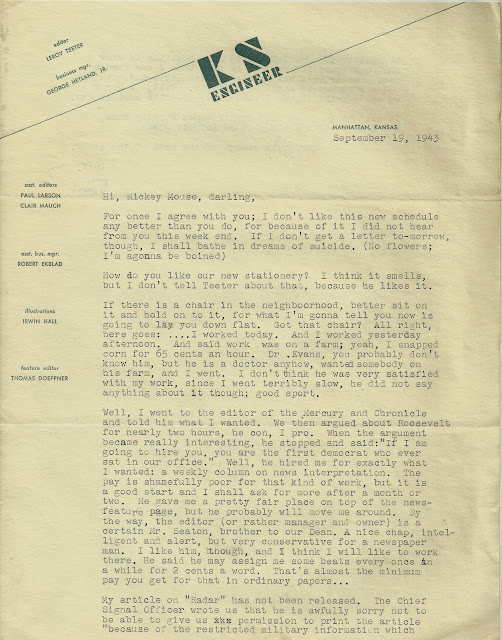 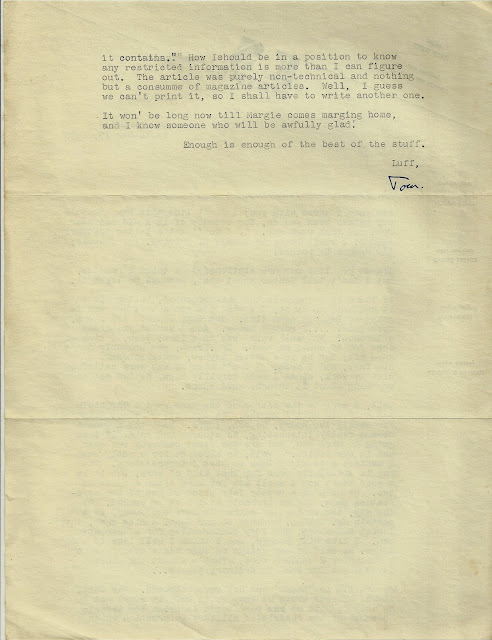 For once I agree with you; I don't like this new schedule any better than you do, for because of it I did not hear from you this week end. If I don't get a letter to-morrow, though, I shall bathe in dreams of suicide. (No flowers; I'm gonna be boined)

How do you like our new stationery? I think it smells, but I don't tell Teeter about that, because he likes it.

If there is a chair in the neighborhood, better sit on it and hold on to it, for what I'm gonna tell you now is going to lay you down flat. Got that chair? All right, here goes:.... I worked today. And I worked yesterday afternoon. And said work was on a farm; yeah, I snapped corn for 65 cents an hour. Dr. Evans, you probably don't know him, but he is a doctor anyhow, wanted somebody on his farm, and I went. I don't think he was very satisfied with my work, since I went terribly slow, he did not say anything about it though; good sport.

Well, I went to the editor of the Mercury and Chronicle and told him what I wanted. We then argued about  Roosevelt for nearly two hours, he con, I pro. When the argument became really interesting, stopped and said: "If I am going to hire you, you are the first democrat who ever sat in our office." Well, he hired me for exactly what I wanted: a weekly column on news interpretation. The pay is shamefully poor for that kind of work, but it is a good start and I shall ask for more after a month or two. He gave me a pretty fair place on top of the news-feature page, but he probably will move me around. By the way, the editor (or rather manager and owner) is a certain Mr. Seaton, brother to our Dean. A nice chap, intelligent and alert, but very conservative for a newspaper man. I like him, though, and I think I will like to work there. He said he may assign me some beats every once in a while for 2 cents a word. That's almost the minimum pay you get for that in ordinary papers...

My article on "Radar" has not been released. The Chief Signal Officer wrote us that he is awfully sorry not to be able to give us permission to print the article "because of the restricted military information which it contains." How I should be in a position to know any restricted information is more than I can figure out. The article was purely non-technical and nothing but a consume of magazine articles. Well, I guess we can't print it, so I shall have to write another one.

It won't be long now till Margie comes marging home, and I know someone who will be awfully glad!

Enough is enough of the best of the stuff.
Luff,
Tom.

I think it's as little funny that Opa makes such a big deal about his farm work- (and the fact that he worked at all)- from all the letters it sounds like he does a lot of work and has experience doing farm work. Not sure why Grandmother needed a chair for that news, but he seems happy to have found work. Looks like his idleness got to him!

His description of his encounter with the editor of the newspaper is fabulous. Yet I can't help but get a "Mad Men" vibe about it with the boys kickin' it back, talking politics and giving out jobs. I also wonder how much of this story was a theatrical telling of a more boring reality. Who knows. Opa did get a writing gig, which makes me wonder if he thought he might end up following in his father's footsteps in journalism, with all the blockades to his engineering career. You'll be happy to know that we found those Mercury Chronicle articles and will be posting them here!

Alas Opa's radar article couldn't be published, and while I'm selfishly glad that I don't have to transcribe it now, I know there are some readers who may have been looking forward to it.