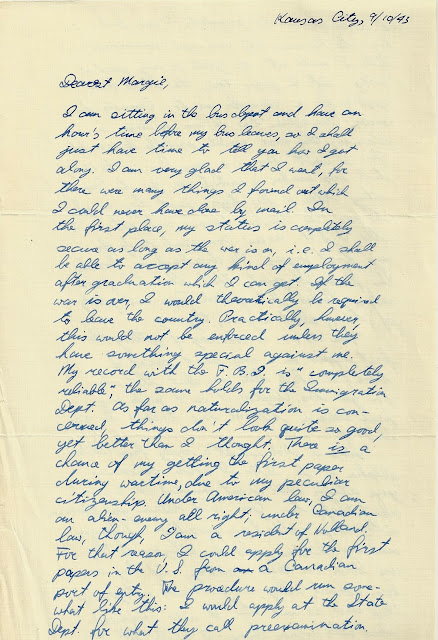 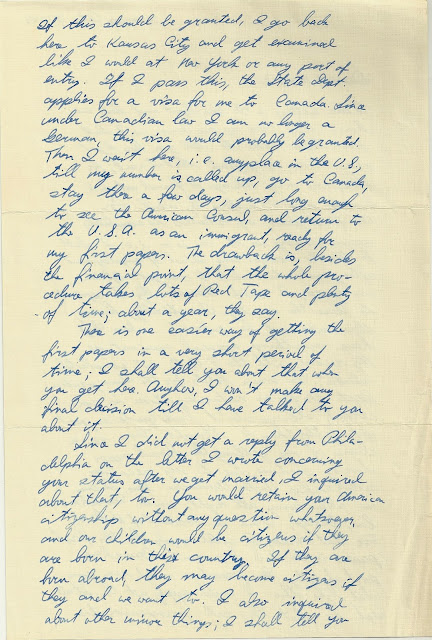 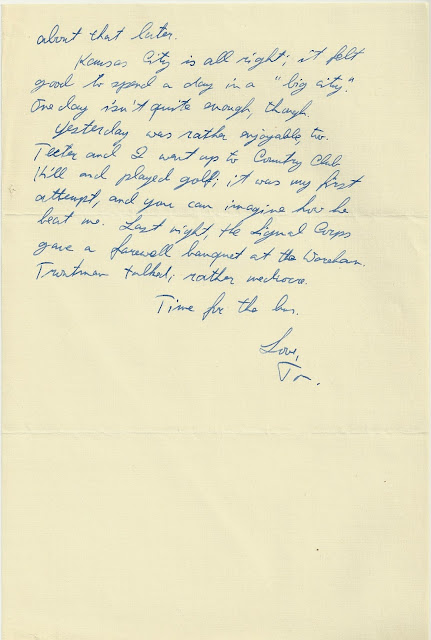 I am sitting in the bus depot and have an hour's time before my bus leaves. So I shall just have time to tell you how I got along. I am very glad that I went, for there were many things I found out which I could never have done by mail. In the first place, my status is completely secure as long as the war is on, i.e. I shall be able to accept any kind of employment after graduation which I can get. If the war is over, I would theoretically be required to leave the country. Practically, however, this would not be enforced unless they have something special against me. My record with the F.B.I. is "completely reliable," the same holds for the Immigration Dept. As far as naturalization is concerned, things don't look quite so good, yet better than I thought. There is a chance of my getting the first paper during wartime, due to my peculiar citizenship. Under American law, I am an alien-enemy all right; under Canadian law, though, I am a resident of Holland. For that reason, I could apply for the first papers in the U.S. from a Canadian port of entry. The procedure would run some-what like this: I would apply to the State Dept. for what they call pre-examination. If this should be granted, I go back here to Kansas City and get examined like I would at New York or any port of entry. If I pass this, the State Dept. applies for a visa for me to Canada. Since under Canadian law I am no longer a German, this visa would probably be granted. Then I wait here, i.e. anyplace in the U.S., till my number is called up, go to Canada, stay there a few days, just long enough to see the American Consul, and return to the U.S.A. as an immigrant, ready for my first paper. The drawback is, besides the financial point, that the whole procedure takes lots of Red Tape and plenty of time; about a year, they say.

There is one easier way of getting the first papers in a very short period of time; I shall tell you about that when you get here. Anyhow, I won't make any final decision till I have talked to you about it.

Since I did not get a reply from Philadelphia on the letter I wrote concerning your status after we get married, I inquired about that, too. You would retain your American citizenship without any question whatsoever, and our children would be citizens if they are born in this country. If they are born abroad, they may become citizens if they and we want to. I also inquired about other minor things; I shall tell you about that later.

Kansas City is all right; it felt good to spend a day in a "big city."

Yesterday was rather enjoyable, too. Teeter and I went up to County Club Hill(?) and played golf; it was my first attempt, and you can imagine how he beat me. Last night, the SignalCorps gave a farewell banquet at the Wareham. Troutman talked; rather mediocre.

Time for the bus.

Opa's visit to Kansas City seems like it went well. It's really intriguing to see the details of how refugees and immigrants have to navigate a pretty jumbled process, especially when it's my own grandfather.

If I'm not mistaken, Kansas City was the first "big city" Opa got to visit since his arrival to the United States. He spent time on the East coast in New York and Philadelphia before heading to Kansas, but after that he was fairly confined to the plains. The hustle of a city must have been a little nostalgic for him- even if it was completely different from Berlin.

Opa shares the answers to some of the questions he brought up, but not all of them and I'm really curious! We know that he is secure in the U.S. as long as the war is on. After the war ends his status gets a little shaky, but as long as he stays out of trouble, he should be able to buy enough time to get his citizenship papers rolling. One way for him to get citizenship is to jump through a thousand loopholes. I volunteered for an organization that helps vulnerable immigrants, and one such person was in the United States on a special visa that marked her as a refugee of sorts. There was an insecurity in the person's status, because at any time the policy could change in a way that might declare the country of origin to be "safe" and therefore she was no longer in need of refuge. The problem was that under her special status, the only way she could start a path to citizenship was to leave the country and come back in as a different kind of immigrant (under a different status). This is exactly what Opa was being told to do some 75 years ago.

Opa said that there was an easier, shorter way of getting his first papers towards citizenship and then leaves everyone hanging by saying he'll tell Grandmother when they see each other. Seriously?! You went into the gritty details of the other option but won't even give us a hint on this one? What was it? I'm wondering if it was joining the military. We know Opa eventually joins the military, but it didn't happen till later, and we know he didn't (at least period to this) have any interest in joining. So I am super curious what happens and what the letters will tell us from here!

He answers the question about the marriage- but leaves out the most obvious answer we were looking for! Of course Grandmother retains her citizenship, but what about Opa? Maybe that was the quicker route and he didn't want her to feel pressured or rushed?

Opa played golf for the first time, which cracks me up because I can't imagine playing an entire game with zero experience.

So far Opa has options, seems fairly safe in his status as a visitor to the United States. Anything and everything can change in a heartbeat, but for now, in the eyes of the United States, he is "Completely Reliable."