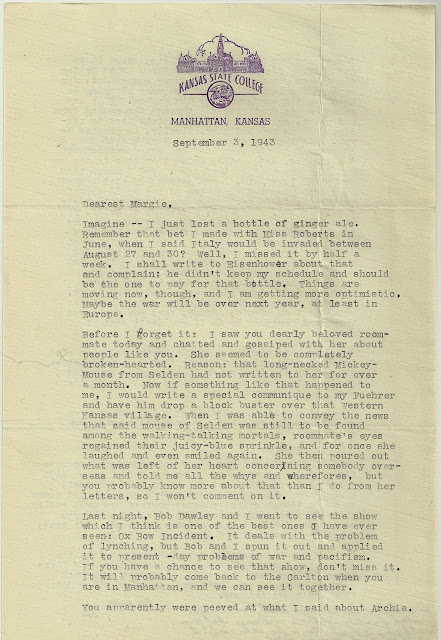 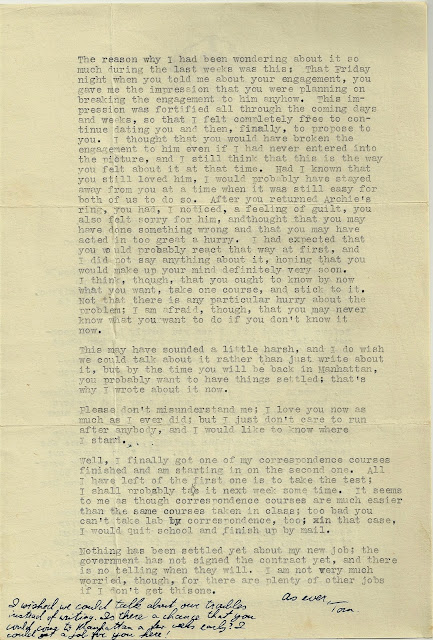 Imagine -- I just lost a bottle of ginger ale. Remember that bet I made with Miss Roberts in June, when I said Italy would be invaded between August 27 and 30? Well I missed it by half a week. I shall write to Eisenhower about that and complain; he did' keep my schedule and should be the one to pay for that bottle. Things are moving now, though, and I am getting more optimistic. Maybe the war will be over next year, at least in Europe.

Before I forget it: I saw your dearly beloved roommate today and chatted and gossiped with her about people like you. She seemed to be completely broken-hearted. Reason: that long-necked Mickey-Mouse from Selden had not written to her for over a month. Now if something like that happened to me, I would write a special communique to my Furhrer and have him drop a block buster over that Western Kansas village. When I was able to convey the news that said mouse of Selden was still to be found among the walking-talking mortals, roommate's eyes regained their juicy-blue sprinkle, and for once she laughed and even smiled again. She then poured out what was left of her heart concerning somebody overseas and told me all the whys and wherefores, but you probably know more about that than I do from her letters, so I won't comment on it.

Last night, Bob Dawley and I went to see the show which I think is one go the best ones I have ever seen: Ox Bow Incident. It deals with the problem of lynching, but Bob and I spun it out and applied it to present-day problems of war and pacifism. If you have a chance to see that show, don't miss it. It will probably come back to the Carlton when you are in Manhattan, and we can see it together.

You apparently were peeved at what I said about Archie. The reason why I had been wondering about it so much during the last weeks was this: That Friday night you told me about your engagement, you gave me the impression that you were planning on breaking the engagement to him anyhow. This impression was fortified all through the coming days and weeks, so that I felt completely free to continue dating you and then, finally, to propose to you. I thought that you would have broken the engagement to him even if I had never entered into the picture, and I still think that this is the way you felt about it at the time. Had I known that you still loved him, I would probably have stayed away from you at a time when it was still easy for the both of us to do so. After you returned Archie's ring, you had, I noticed, a feeling of guilt, you also felt sorry for him, and thought that you may have done something wrong an that you may have acted in too great a hurry. I had expected that you would probably react that way at first, and I did not say anything about it, hoping that you would make up your mind definitely very soon. I think, though, that you ought to know by now what you want, take one course, and stick to it. Not that there is any particular hurry about the problem; I am afraid, though, that you may never know what you want to do if you don't know it now.

This may have sounded a little harsh, and I do wish we could talk about it rather than just write about it, but by the time you will be back in Manhattan, you probably want to have things settled; that's why I wrote about it now.

Please don't misunderstand me; I love you now as much as I ever did; but I just don't care to run after anybody, and I would like to know where I stand.

Well, I finally got one of my correspondence courses finished and am starting in on the second one. All I have left of the first one is to take the test; I shall probably take it next week some time. It seems to me as though correspondence courses are much easier than the same courses taken in class; too bad you can't take lab by correspondence, too; in that case, I would quit school and finish up by mail.

Nothing has been settled yet about my new job; the government has not signed the contract yet, and there is no telling when they will. I am not very much worried, though, for there are plenty of other jobs if I don't get this one.

handwritten note: I wished we could talk about our troubles instead of writing. Is there a chance that you could come to Manhattan a few weeks early? I could get a job for you here!

Opa did get a little satisfaction with his close estimate of the Italian invasion. I'm sure he was pretty pleased with himself, even if his near miss did cost him a bottle of "ginger ale." He feels optimistic with the war movement, hopeful that next year it will be over- at least in Europe. I think the general consensus was that the war in Europe would be over before the war in the Pacific- I wonder what led to that belief? As a student of the war, the Japanese were never really talked about other than the context of Pearl Harbor, Kamikaze pilots, and Hiroshima. We sort of dramatized the Nazis and their power but the war in the Pacific was sort of this weird side event- at least in how I perceived it growing up. I'm sure the news of the war front in real time were more detailed and helped shape people's perspectives of when things would happen.

Grandmother must have been too busy with her family and Archie to answer her poor roommate's mail, ha. Opa's description of the whole thing is kind of hilarious, as if the roommate were in some dire situation.

Thanks to Opa's glowing recommendation, I watched the Ox Bow Incident. It was a powerful movie, and sat with me in ways I didn't expect it to. I have found that a lot of the good older movies are fairly simple in their plot. This movie was like that (similar to the simplicity of 12 Angry Men), where it zoomed in on one event and explored the scene from every angle and character. The main premise of the movie is that someone comes riding into a Western town declaring the death of a beloved ranch owner - gunshot to the head. The listening men gathered in the saloon are quick to organize a vigilante group who will seek a "faster" justice than a judge and jury can offer for the sought after murderer(s). A lynching mob arises. There are characters who are motivated by justice for their murdered friend. Some characters (a minority) are advocating for legal recourse from the beginning, trying to speak reason to the group. There are some characters who don't care as much about justice as they do about being a part of the "fun" of a lynching mob. One father-son duo is playing out a power dynamic where the father hopes that a good lynching experience will toughen his "weak" son. A woman tries to prove her equality by being the most bloodthirsty in the bunch. The group is eerily calm and even attempts to legalize their actions through questionable loopholes. There are some on the fence on the matter who change their mind when faced with the act. Ultimately, the three men who are caught in the web of the lynching mob are indeed hung despite their pleas, and the pleas of 7 in the group who are against the majority. Predictably, we learn that they were innocent, and that in fact the murdered man is in fact alive. The men respond in different ways to their mistake, but most respond by silence.

That movie for Opa was about the problem of lynching, which  he sort of relegated to the past, but applied it to the current issues of war and pacifism. I'm so curious about what that conversation would have been. Is Opa still a pacifist at this point? I think he would have argued that the Americans entered the war through a similar mob mentality, or hell- that the Germans instigated the war in this way. I'm not really sure though. For me- I thought about lynching in America. I thought about the countless stories of black men and women who are killed while unarmed and for petty crimes if any crime at all. I thought about the mob mentality that rules social media when people form violent and unshakable opinions or feelings, with little to no valid information. Propaganda, systemic racism, unchecked bias, and other means of communicating misinformation are a way to whip an entire nation into a frenzy - without legality- without facts- without morality. I thought about how people feel very dignified and civilized in their rampage. How we make logical excuses about it all. How logic, when turned against us, becomes the enemy. How brutality is stretched to look like justice. See- that movie really is powerful.

Between war predictions, movie critiques, and roommate rendezvous, Opa has a little mic-drop moment about Archie. I am actually on team Opa right now- I can't believe Grandmother is still carrying Archie around in her pocket, talking about him and letting him visit. Opa basically tells Grandmother to figure it out and get it over with. Is she his or Archie's? Because if she doesn't know now- she may never know- and that's not a foundation for a marriage. As always, Opa reminds her that despite his sharp words, he loves her, wants her, and hopes that she will be his.

It seems like the fall semester starts very late- poor Opa just wants Grandmother to get back already so he can continue wooing her and keep her from the Archie chorus back home. Maybe once Grandmother reconnects with Opa she will feel more secure in her choice and stop talking and thinking and worrying about Archie.