I was originally going to have a couple more posts to introduce you to Grandmother, but I think I can do it all in one which will catch us up to where Grandmother is now (hanging out with Opa!). 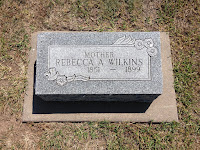 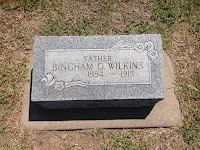 We talked about the Sloans (Grandmother's father's side). The Wilkins (Grandmother's mother's side) we don't know as much about. Rebecca Wilkins died in 1899 at the age of 48. Bingham Wilkins was a railroader and did a few odd jobs. I have faint memories of Grandmother talking about her Grandfather working at the railroad station, living in the house there. When we went to Selden, we looked through their newspapers from the early 1900's. Here are a couple talking about Bingham: 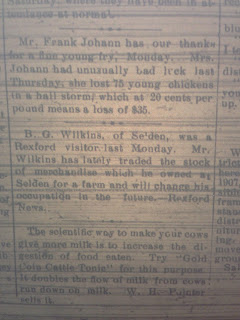 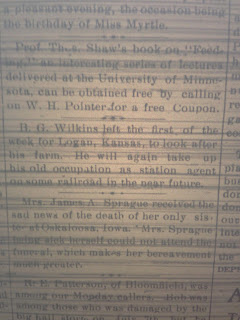 Here's the transcription of the part that mentions Wilkins:

B.G. Wilkins, of Selden, was a Rexford visitor last Monday. Mr. Wilkins has lately traded the stock of merchandise which he owned at Selden for a farm and will change his occupation in the future. - Rexford News


(looks like this is when he dropped farming and picked up railroading!)

B.G. Wilkins left the first of the week for Logan, Kansas, to look after his farm. He will again take up his old occupation as station agent on some railroad in the near future.

We are not sure how Mary Ellen Wilkins (the daughter of B.G. and Rebecca) met William Sloan, both families lived in Selden, but it seems some of the Wilkins moved away, including Bingham toward the beginning of the 1800's. Possibly due to his careers changes! Both families had experience farming. The Sloans made their living that way. When I describe Grandmother as a "Kansas farm girl", it is true on both sides!

Selden is still a TINY town in Kansas. How do I know? I visited of course! Here is a description from one of the papers we looked at from the 1900's. 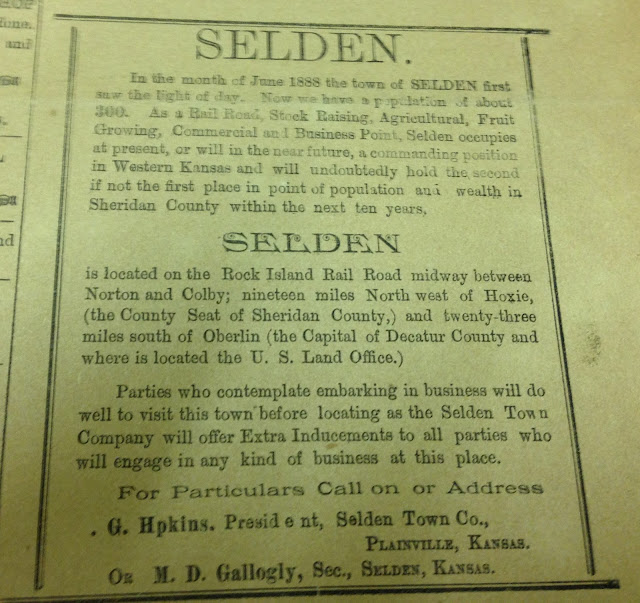 In the month of June 1888 the town of Selden first saw the light of day. Now we have a population of about 300. As a Rail Road, Stock Raising, Agricultural, Fruit Growing, Commercial and Business Point, Selden occupies at present, or will in the near future, a commanding position in Western Kansas and will undoubtedly hold the second if not the first place in point of population and wealth in Sheridan County within the next ten years.

Seldenis located on the Rock Island rail road midway between Norton and Colby; nineteen miles North west of Hoxie, (the county seat of Sheridan County,) and twenty-three miles south of Oberlin(the capital of Decatur County and where is located the U.S. Land Office.)

Parties who contemplate embarking business will do well to visit this town before locating as the Selden Town Company will offerExtra Inducements to all parties who will engage in any kind of business at this place.

According to this newspaper, this town of 300 was the up and coming place to be (or they hoped you would think so and bring your business there). Selden's current population is listed as 216.

Grandmother went to school there, her extended family is in the cemetery in Selden.  Grandmother grew up on a farm not far from the heart of town. They lived in the farmhouse below (you can see me, my dad and the nice man who lives there now who let us walk in and look at it). Also- that dog was awesome. 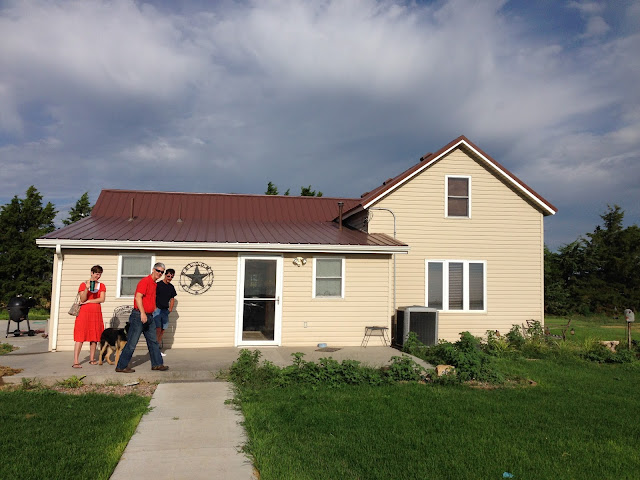 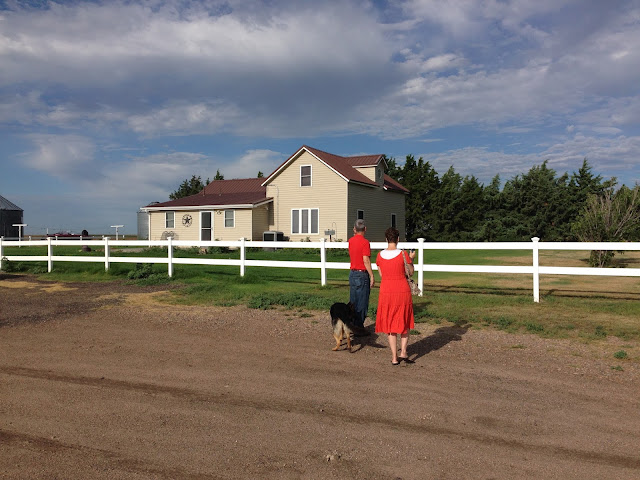 I shared a bit about grandmother's brothers, who you will hear more about as we go through the blog. I want to catch you up on Grandmother's life between growing up in Selden to going to college and eventually meeting Opa. Then you'll be ready to enjoy the letters from Opa to Grandmother.

After graduating as valedictorian of her tiny High School, Grandmother spent two years at Fort Hays Community College. We don't know much about this time except one important story that is one of my favorites about Grandmother.

Grandmother transferred from Fort Hays to Kansas State University, where she and Opa met. But something she never really talked about was the silly little detail that she was ENGAGED when she met Opa! In her time at Fort Hays, she became engaged to a boy named Archie. This little fact was hinted at: there was a story that Grandmother hid her ring when she met Opa. But Grandmother would never tell us the whole story.

When Opa died in 2001, we all traveled to Virginia for the funeral. The night before the funeral, my sisters and I spent the night with my Grandmother, sort of as a bonding time but also to keep her company. We were all in our PJs when we asked Grandmother to finally tell us the story of how she and Opa met, and to tell us if the rumors about her engagement were true.

She told us, with a twinkle in her eye, about Archie and the story of hiding the ring. Archie was her boyfriend/fiance, sort of the boy-next-door. The way she spoke about him, she was almost marrying him out of pity. She felt too bad to say no. (Glad she got out of that!) When she transferred to Kansas State in 1942, she had an engagement ring on her finger, but it seems her heart wasn't in it.

Grandmother was raised Methodist, and so she joined the Wesley Foundation (the Methodist College group), and that spring, on a group hike up the only hill in town- Bluemont Hill- she met Opa. (Kansas is crazy flat- like you can watch the sun set for three hours flat- so this really is the only hill in town). When she was talking with Opa, she really liked him, so she made sure that she kept her ring hand in her pocket!

Grandmother told this story like it was just so matter of fact, but my sisters and I loved every juicy detail. We just could not imagine our prim and proper Grandmother ever being so cheeky! The story goes that she eventually broke it off with Archie and dated Opa. Grandmother said that Archie's mom even wrote a really nasty note about how Grandmother had broken his heart. She said she only recently had gotten rid of the letter because she had been so guilt-ridden by it when Opa finally told her she needed to get rid of it!

(To be honest, I wish she had kept it because I would love to see what "nasty" in 1940s farm language is.)

At this point going forward in our letters, Opa is writing to grandmother as she is home for the summer and he remains at Kansas State. Get ready- because Opa can write a LETTER!
Posted by Sarah Snow at Wednesday, September 06, 2017