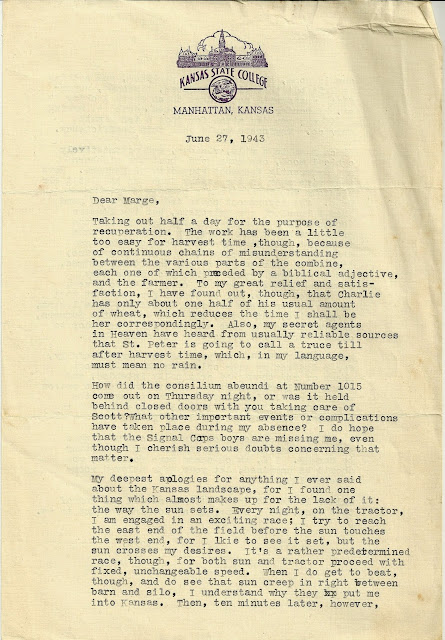 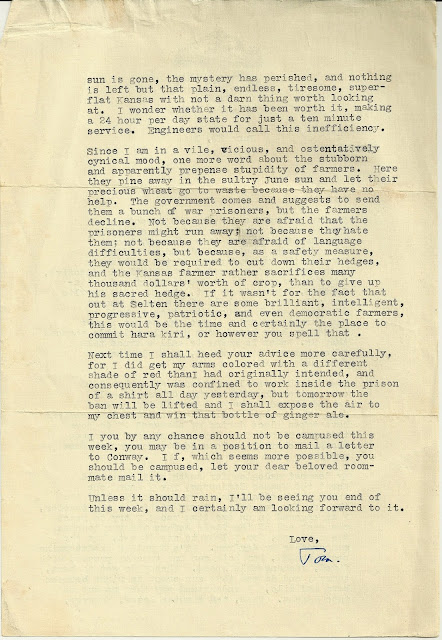 Letter From Opa to Grandmother

Taking out half a day for the purpose of recuperation. The work has been a little too easy for harvest time, though, because of continuous chains of misunderstanding between the various parts of the combine, each one of which preceded by a biblical adjective, and the farmer. To my great relief and satisfaction, I have found out, though, that Charlie has only about one half of his usual amount of wheat, which reduces the time I shall be her(e) correspondingly. Also, my secret agents in Heaven have heard from usually reliable sources that St. Peter is going to call a truce till after harvest time, which, in my language, must mean no rain.

How did the consilium abeundi at Number 105 come out on Thursday night, or was it held behind closed doors with you taking care of Scott? What other important events or complications have taken place during my absence? I do hope that the Signal Corps boys are missing me, even though I cherish serious doubts concerning that matter.

My deepest apologies for anything I ever said about the Kansas landscape, for I found one thing which almost makes up for the lack of it: the way the sun sets. Every night, on the tractor, I am engaged in an exciting race; I try to reach the east end of the field before the sun touches the west end, for I like to see it set, but the sun crosses my desires. It's a rather predetermined race, though, for both sun and tractor proceed with fixed, unchangeable speed. When I do get to beat, though, and do see that sun creep in right between barn and silo, I understand why they put me into Kansas. Then, ten minutes later, however, sun is gone, the mystery has enriched, and nothing is left but that plain, endless, tiresome, super-flat Kansas with not a darn thing worth looking at. I wonder whether it has been worth it, making a 24 hour per day state for just a ten minute service. Engineers would call this inefficiency.

Since I am in a vile, vicious, and ostentatively cynical mood, one more word about the stubborn and apparently prepense stupidity of farmers. Here they pine away in the sultry June sun and let their precious wheat go to waste because they have no help. The government comes and suggests to send them a bunch of war prisoners, but the farmers decline. Not because they are afraid that the prisoners might run away; not because they hate them; not because they are afraid of language difficulties, but because, as a safety measure, they would be required to cut down their hedges, and the Kansas farmer rather sacrifices many thousand dollars' worth of crop, than to give up his sacred hedge. If it wasn't for the fact that out at Selten (Selden) there are some brilliant, intelligent, progressive, patriotic, and even democratic farmers, this would be the time and certainly the place to commit hara kiri, or however you spell that.

Next time I shall heed your advice more carefully, for I did get my arms colored with a different shade of red than I had originally intended, and consequently was confined to work inside the prison of a shirt all day yesterday, but tomorrow the ban will be lifted and I shall expose the air to my chest and win that bottle of ginger ale.

I(f) you by any chance should not be campused this week, you may be in a position to mail a letter to Conway. If, which seems more possible, you should be campused, let your dear beloved roommate mail it.

Unless it should rain, I'll be seeing you end of this week, and I certainly am looking forward to it.

So many quotable lines. My favorite is his description of the magnificent sunset, followed by this fabulous bit:


I wonder whether it has been worth it, making a 24 hour per day state for just a ten minute service. Engineers would call this inefficiency.

I can attest to this experience: when we visited Kansas I was enamored by the gorgeous sunset (although I would say it actually lasts longer than 10 minutes). In fact, we were driving towards the sun set one evening in such a way that it seemed the sun was setting for nearly three hours. But on the other hand there is absolutely nothing else to look at. My Grandmother used to sing this chorus: "Blue skies, nothing but blue skies do I see"- and she was right. That's literally all that there is to look at. Now I know why one of her favorite pastimes with us as kids was looking at clouds and seeing different shapes in them. That must have been a giant source of entertainment for her as a kid! Nothing else going on with the Kansas landscape!

Then I love Opa's grumpy rage against the farmers who will not cut their hedge. It does seem ridiculous, but I wonder if these "hedges" are actually those precious erosion blockers that were so needed during the dust bowl. With acres and acres of flat land, the winds meet so little resistance that any dry land is swept up. I wonder if the farmers were actually thinking big-picture about their hedges (that may have taken a while to grow) and the role they play in keeping another dust bowl from happening. If that is so- I bet Grandmother let Opa know that while he may have lived in Kansas a few years now, he's still a city boy without the memory of the dust bowl behind him.

Last but not least, Opa's description of his sunburn and having to "work inside the prison of a shirt" is perhaps my favorite way anyone has ever talked about a sunburn.

I love Opa's quirky sense of humor and I think that this is going to be a lot of fun going through these letters!