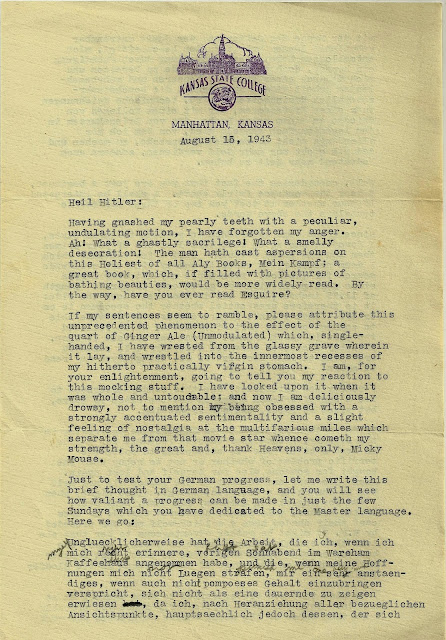 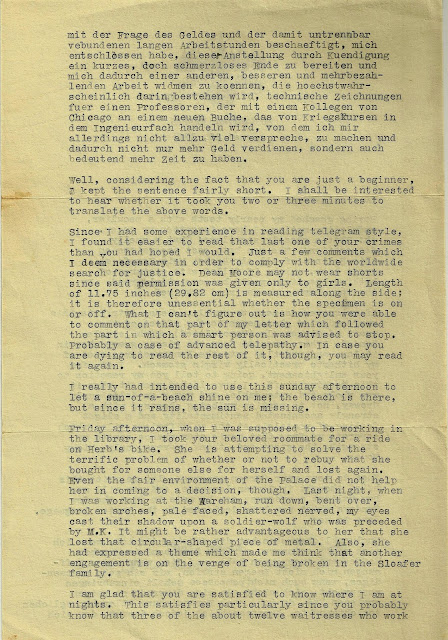 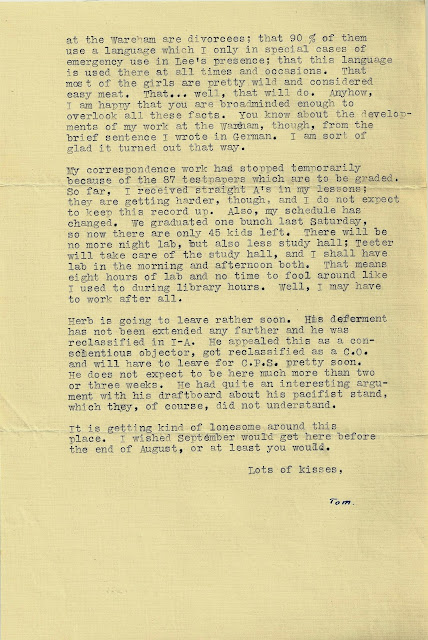 Having gnashed my pearly teeth with a peculiar, undulating motion, I have forgotten my anger. Ah! What a ghastly sacrilege: What a smelly desecration: The man hath cast aspersions on this Holiest of all Aly Books, Mein Kampf; a great book, which, if filled with pictures of bathing beauties, would be more widely read. By the way, have you ever read Esquire?

If my sentences seem to ramble, please attribute this unprecedented phenomenon to the effect of the quart of Ginger Ale (unmodulated) which, single-handed, I have wrested from the glassy grave wherein it lay, and wrestled into the innermost recesses of my hitherto practically virgin stomach. I am, for your enlightenment, going to tell you my reaction to this mocking stuff. I have looked upon it when it was whole and untouchable; and now I am deliciously drowsy, not to mention being obsessed with a strongly accentuated sentimentality and a slight feeling of nostalgia at the multifarious miles which separate me from that movie star whence cometh my strength, the great and, thank Heavens, only, Micky Mouse.

Just to test your German progress, let me write this brief thought in German language, and you will see how valiant a progress can be made in just the few Sundays which you have dedicated to the Master language. Here we go:

Google Translate of the German:
(Unfortunately the work which, if I recall correctly, I have accepted Saturday at the Wareham cafe, and who, if my hopes do not reproach me, promise me a very respectable, if not pompous, salary, I have decided, on the basis of all the points of view, to deal with the question of money and the lengthy working hours which have been inseparable from it, that I have made a brief, but painless end to this appointment by means of notice To devote myself to another, better, and more paid work, which will most likely consist of technical drawings for a professor who will deal with a colleague of Chicago on a new book, which will deal with martial arts in the engineer's office Not much promise to make, and thereby not only earn more money, but also have significantly more time.)

Well, considering the fact that you are just a beginner, I kept the sentence fairly short. I shall be interested to hear whether it took you two or three minutes to translate the above words.

Since I had some experience in reading telegram style, I found it easier to read that last one of your crimes than you had hoped I would. Just a few comments which I deem necessary in order to comply with the worldwide search for justice. Dean Moore may not wear shorts since said permission was given only to girls. Length of 11.75 inches (29.82 cm) is measured along the side; it is therefore unessential whether the specimen is on or off. What I can’t figure out is how you were able to comment on that part of my letter which followed the part in which a smart person was advised to stop. Probably a case of advanced telepathy. In case you are dying to read the rest of it, thought, you may read it again.

I really had intended to use this Sunday afternoon to let a sun-of-a-beach shine on me; the beach is there, but since it rains, the sun is missing.

Friday afternoon, when I was supposed to be working in the library, I took your beloved roommate for a ride on Herb’s bike. She is attempting to solve the terrific problem of whether or not to rebuy what she bought for someone else for herself and lost again. Even the fair environment of the Palace did not help her in coming to a decision, though. Last night, when I was working at the Wareham, run down, bent over, broken arches, pale faced, shattered nerves, my eyes cast their shadow upon a soldier-wolf who was preceded by M.K. It might be rather advantageous to her that she lost that circular-shaped piece of metal. Also, she had expressed a theme which made me think that another engagement is on the verge of being broken in the Sloafer family.
I am glad that you are satisfied to know where I am at nights. This satisfies particularly since you probably know that three of the above twelve waitresses who work at the Warhead are divorcees; that 90% of them use a language which I only in special cases of emergency use in Lee’s presence; that this language is used there at all times and occasions. That most of the girls are pretty wild and considered easy meat. That…well, that will do. Anyhow. I am happy that you are broadminded enough to overlook all these facts. You know about the developments of my work at the wareham, though, from the brief sentence I wrote in German, I am sort of glad it turned out that way.

My correspondence work has stopped temporarily because of the 87 test papers which are to be graded. So far, I received straight A’s in my lessons; they are getting harder, though, and I do not expect to keep this record up. Also, my schedule has changed. We graduated one bunch last Saturday, so now there are only 45 kids left. There will be no more night lab, but also less study hall; Teeter will take care of the study hall, and I shall have lab in the morning and afternoon both. That means eight hours of lab and no time to fool around like I used to during library hours. Well, I may have to work after all.

Herb is going to leave rather soon. His deferment has not been extended any farther and he was reclassified in I-A. He appealed this as a conscientious objector, got reclassified as a C.O. and will have to leave for C.P.S. pretty soon. He does not expect to be here much more than two or three weeks. He had quite an interesting argument with his draftboard about his pacifist stand, which they, of course, did not understand.

It is getting kind of lonesome around this place. I wished September would get here before the end of August, or at least you would.

It appears that Opa began this letter drunk- and sobered up as he wrote (or gave up and came back to it after he sobered up). I'll admit the Hitler talk in the beginning caught me off-guard. But honestly, you can't be serious and sober (literally and metaphorically) all the time. It'll kill you. Honestly- it's interesting that when under the influence, the stuff that pours out is Hitler and Mein Kampf mixed with some anger. Sounds about right.

Opa apologizes for his "drowsiness" and describes his mood as nostalgic and missing his "micky mouse" (grandmother). If I were in Opa's shoes, I think I would feel compelled to get drunk every now an then and also be terrified of what would come out of my mind and mouth when all inhibitions are gone. Sweetly, he mostly just misses things.

Then Opa does something cheeky, especially since Grandmother does not have the luxury of google translate (although I'm sure by this point she may have had a German-English dictionary). He writes a fairly important update- all in German. He has quit his job as a bus-boy (which I think is hilarious because he only lasted a week!). He's set his sights on easier and better paid work. Not a bad idea.

I'm sure his mother would approve- she would not have liked the idea of him being in a bar-like atmosphere working such hard labor for such late hours. "Are you getting enough rest? Sleep?" I can just hear her now- chastising him for working too hard and not focusing on his studies.

Then Opa continues his joke about his new rule on short length, and somehow remembers his last letter told Grandmother not to read past a certain point. I wonder if it was custom to send the letter that you were responding to so that people could follow your response? If not- Opa has a good memory!

Opa talks about Herb's sort of drafting experience as a conscientious objector (CO). This brings us all back into the context of the war and what it means to be a male in America. Herb was able to defer his draft (my guess is on the basis of being a student) but now his time has come up and he finally succeeded in registering as a CO. This doesn't mean he doesn't have to serve. In fact, CO's often were sent to their own sort of boot camp and training for service towards the war effort in production or other types of support. I guess it didn't really comply completely with their rejection of war, but it was a way for them not to have to carry weapons and act as soldiers. Opa has compassion for Herb's case, as he himself as identified as a Conscientious Objector. Yet, he is invested completely in America winning the war.

So my two favorite parts of this letter: Opa's little pun about sun bathing: "I really had intended to use this Sunday afternoon to let a sun-of-a-beach shine on me..." I mean- clever right?

Then of course this sweet line: "I wished September would get here before the end of August, or at least you would." Don't we all have those moments? When we wish we could skip a month, squeeze states or countries so that they are closer together? It's been a while since I had that yearning for someone - it's a bittersweet feeling. You find out just how much you care for them, and in finding out you realize that you really don't care for the distance.