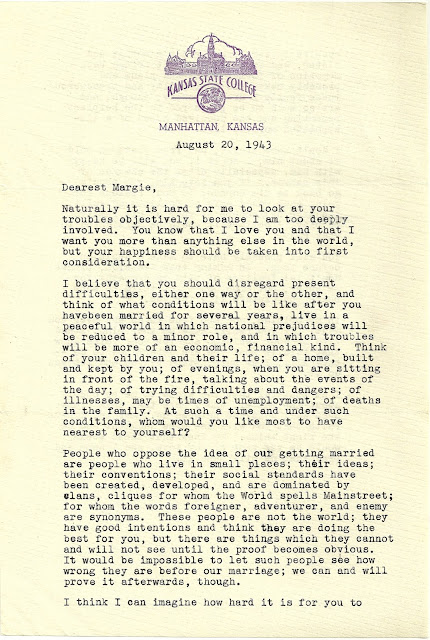 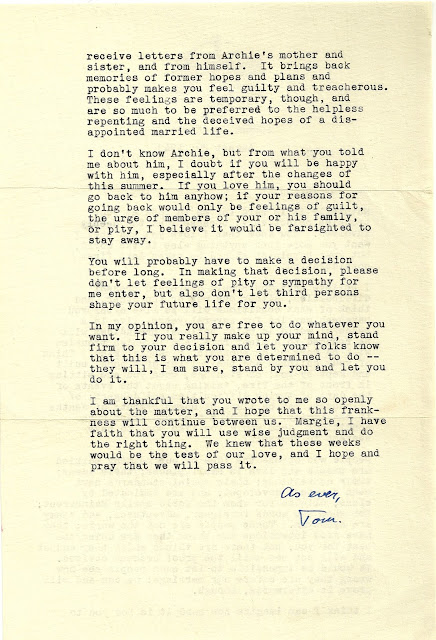 Naturally it is hard for me to look at your troubles objectively, because I am too deeply involved. You know that I love you and that I want you more than anything else in the world, but your happiness should be taken into first consideration.

I believe that you should disregard present difficulties, either one way or the other, and think of what conditions will be like after you have been married for several years, live in a peaceful world in which national prejudices will be reduced to a minor role, and in which troubles will be more of an economic, financial kind. Think of your children and their life; of a home, built and kept by you; of evenings, when you are sitting in front of the fire, talking about the events of the day; of trying difficulties and dangers; of illnesses, may be times of unemployment; of deaths in the family. At such a time and under such conditions, whom would you like most to have nearest yourself?

People who oppose the idea of our getting married are people who live in small places; their ideas; their conventions; their social standards have been created, developed, and are dominated by the clans, cliques for whom the World spells Mainstream; for whom the words foreigner, adventurer, and enemy are synonyms. These people are not the world; they have good intentions and think they are doing the best for you, but there are things which they cannot and will not see until the proof becomes obvious. It would be impossible to let such people see how wrong they are before our marriage; we can and will prove it afterwards, though.

I think I can imagine how hard it is for you to receive letters from Archie’s mother and sister, and from himself. It brings back memories of former hopes and plans and probably makes you feel guilty and treacherous. These feelings are temporary, though, and are so much to be preferred to the helpless repenting and the deceived hopes of a disappointed married life.

I don’t know Archie, but from what you told me about him, I doubt if you will be happy with him, especially after the changes of this summer. If you love him, you should go back to him anyhow; if your reasons for going back would only be feelings of guilt, the urge of members of your or his family, or pity, I believe it would be farsighted to stay away.

You will probably have to make a decision before long. In making that decision, please don’t let feelings of pity or sympathy for me enter, but also don’t let third persons shape your future life for you.

In my opinion, you are free to do whatever you want. If you really make up your mind. stand firm to your decision and let your folks know that this is what you are determined to do — they will, I am sure, stand by you and let you do it.

I am thankful that you wrote to me so openly about the matter, and I hope that this frankness will continue between us. Margie, I have faith that you will use wise judgment and do the right thing. We knew that these weeks would be the test of our love, and I hope and pray that we will pass it.

Confession: this is one of the first letters I read when we first found the box of letters under Grandmother's desk. I can't remember if it was on top of the pile and that's why I found it- but I wouldn't blame Grandmother for returning to this letter. I have been waiting so long to share it with you!

It's a love letter to us all.

Let me give a little bit of context. Opa and Grandmother are geographically separated for the summer. She is home with her family while Opa (who has no family in the US) is on campus working and taking correspondence classes to keep his goals going. His letters that we have been reading are the first letters of their relationship, letters written during the summer break after a whirlwind spring romance. At some point in the spring into summer, they got engaged.

After Grandmother met Opa, she broke off her engagement with a man named Archie. This man and his family are now writing to Grandmother in an effort to guilt/win her back. Grandmother's family has been peppering her with questions all summer long about whether or not she really should be marrying this German boy. Opa has been answering questions and trying to help her convince them that he is not the spawn of satan or at the very least a foreigner with whom she has nothing in common with. Apparently the pressure is becoming too great and Grandmother really is at a loss about what to do. I think Opa saw this coming but hoped against it. So he writes her this letter. It's a love letter, a pep talk, and a public address to all the people who live in small places.

I will show this to my children one day when they are trying to decide if they are with someone they want to marry. It is SUCH good advice. When things are good or very bad- at the end of the day when you put your feet up by the fire- who do you want close to you? I've only been married about 12 years but I can say that this is incredibly wise coming from a man who had no serious relationship under his belt, and very little by way of parental example. He had few examples of a good marriage and yet here, he captured it! When everything goes right or wrong, who do you want to talk to about it at the end of the day?! For me it is still my husband- without a doubt.

Then he tells Grandmother (likely not for the last time) to listen to her own heart, not the guilt and small-mindedness of people outside. Grandmother always had a problem with guilt. She never wanted to hurt anyone or be a burden to anyone. I can see her struggle so clearly here, and I know Opa probably understands. However, he's cheering her on to make the right choice. He has an inkling that HE is the right choice, but he wants her to be the one to choose. Not him, not Archie, not Archie's mom, and not her own parents. She must choose.

Then this paragraph, my God we need to hear it everyday don't we?


People ... who live in small places; their ideas; their conventions; their social standards have been created, developed, and are dominated by the clans, cliques for whom the World spells Mainstream; for whom the words foreigner, adventurer, and enemy are synonyms. These people are not the world; they have good intentions and think they are doing the best for you, but there are things which they cannot and will not see until the proof becomes obvious.

Again and again and again I need to see that. And the proof? Opa and Grandmother (not without their own struggles) were married til death. They faced geographical separation, moves, deaths in the family, illnesses, and so much more- and they proved Mainstream dead wrong.
Posted by Sarah Snow at Wednesday, September 27, 2017