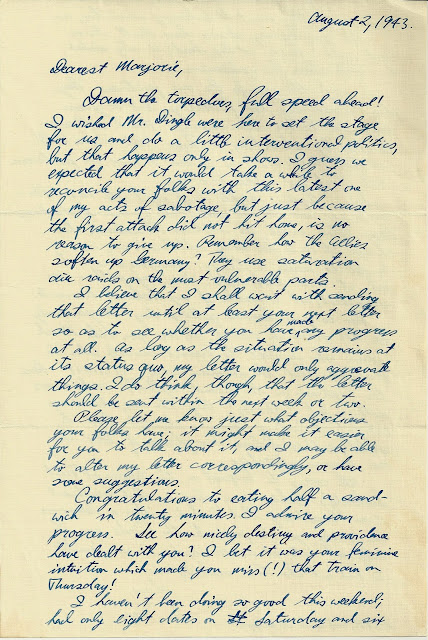 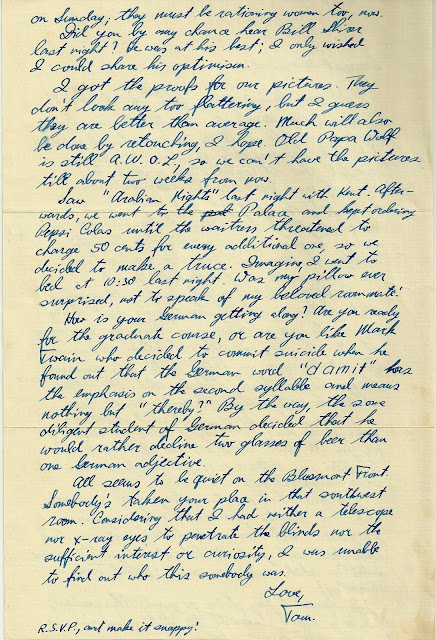 Dearest Marjorie,
Damn the torpedoes. Full speed ahead! I wished Mr. Dingle were here to set the stage for us and do a little interventional politics, but that happens only in shows. I guess we expected that it would take a while to reconcile your folks with this latest one of my acts of sabotage, but just because the first attack did not hit home, is no reason to give up. Remember how the Allies soften up Germany? They use saturation air raids on the most vulnerable parts.
I believe that I shall wait with sending that letter until at least your next letter so as to see whether you have made any progress at all. As long as the situation remains at its status quo, my letter would only aggravate things. I do think, though, that the letter should be sent within the next week or two.
Please let me know just what objections your folks have; it might make it easier for you to talk about it, and I may be able to alter my letter correspondingly, or have some suggestions.
Congratulations to eating half a sandwich in twenty minutes. I admire your progress. See how nicely destiny and providence have dealt with you? I bet it was your feminine intuition which made you miss (!) that train on Thursday!
I haven’t been doing so good this weekend; had only eight dates on Saturday and six on Sunday; they must be rationing women too, now.
Did you by any chance hear Bill Shirer last night? He was at his best; I only wished I could share his optimism.
I got the proofs for our pictures. They don’t look any too flattering, but I guess they are better than average. Much will also be done by retouching, I hope. Old Papa Wolf is still A.W.O.L., so we can’t have the pictures till about two weeks from now.
Saw “Arabian Nights” last night with Kent. Afterwards, we went to the Palace and kept ordering Pepsi Colas until the waitress threatened to charge 50 cents for every additional one, so we decided to make a truce. Imagine, I went to bed at 10:30 last night. Was my pillow ever surprised, not to speak of my beloved roommate.
How is your German getting along? Are you ready for the graduate course, or are you like Mark Twain who decided to commit suicide when he found out that the German word “damit” has the emphasis on the second syllable and means nothing but “thereby?” By the way, the same diligent student of German decided that he would rather decline two glasses of beer than one German adjective.
All seems to be quiet on the Bluemont Front. Somebody’s taken your place in that southwest room. Considering that I had neither a telescope nor x-ray eyes to penetrate the blinds nor the sufficient interest or curiosity, I was unable to find out who this somebody was.

Opa is trying to win Grandmother's parents over, and what I love is the humor with which he talks about it to Grandmother. This is where I see a lot of my Dad. When forced, my Dad can have a serious conversation, but often he inserts a sarcastic or witty comment in every empty space left by an awkward conflict or uncomfortable situation.

Opa has a real challenge ahead if he wants to marry Grandmother but has not received her parents' blessing. Even still, he does get to business and offers some helpful suggestions. He decides to wait before he contacts them and see if Grandmother can give him specific concerns that they have so he can address them. That's pretty logical.

Then Opa continues by making fun of Grandmother for being able to eat a half of a sandwich in under 20 minutes. Guys- you have to know my Grandmother to get the hilarity of this statement. She was the S.L.O.W.E.S.T. eater. Mostly she just didn't eat very much anyway, but she just did not speed eat ever. When I would eat out with her I had to make a very deliberate effort to slow myself down to a crawl so that I could at least try to keep pace with her. I learned (as she got older and needed my help) that she would stop eating when she realized people were waiting on her. She didn't want to be impolite or inconvenience anyone, but she was so tiny that she really did need to eat more. So I learned to eat slowly. It was like practicing mindfulness with food- I think I should try to go back to that since I'm now back to eating at the pace of my husband and sons which is lightning speed.

It makes me smile that Grandmother ate tiny amounts over long periods of time even as a college student.

Opa teases Grandmother by naming that he had several dates over the weekend- I love it. He did actually have a real date, but with a friend to see Arabian Nights. He didn't give his opinion of it- but I saw it just last night in preparation for this blog. (Yes, that's how I do my homework.) The movie was certainly entertaining and had beautiful costumes- there was some weird acting and racist undertones- but overall it was surprisingly entertaining. I was surprised by the simplicity of the story line. There are a few little twists and turns, but it's basically a love story between a king and a woman who wants power.

Grandmother is attempting to learn German! I don't know that she ever learned it. Opa references a piece by Mark Twain where he complains about "The Awful German Language." I read that piece and I found myself laughing out loud. It's pretty hilarious. You don't even need to speak German to get the humor of it. In one part he talks about how the Germans place the verb so far away from the subject that it's absurd. He writes about the fact that in English, the sign of a practiced writer is concise lines and clear focus, but the opposite seems to be true for Germans. Here is a line from that discussion:

A writer's ideas must be a good deal confused, a good deal out of line and sequence, when he starts out to say that a man met a counselor's wife in the street, and then right in the midst of this so simple undertaking halts these approaching people and makes them stand still until he jots down an inventory of the woman's dress. That is manifestly absurd. It reminds a person of those dentists who secure your instant and breathless interest in a tooth by taking a grip on it with the forceps, and then stand there and drawl through a tedious anecdote before they give the dreaded jerk. Parentheses in literature and dentistry are in bad taste.

How I wish I could have read Grandmother's responses to these letters. I know she had a sense of humor, but she often kept it closed in. Would her letters be sprinkled with the same kind of wit and charm? I would love to have seen that.

It's nice to see that Opa had time and space to delight in things like Twain's thoughts of German and how he could impress his potential in-laws.