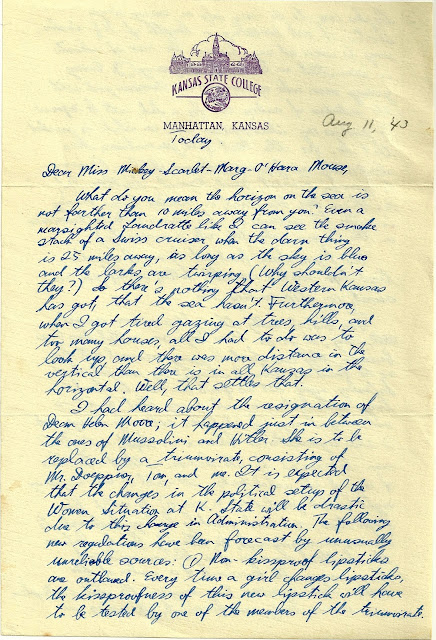 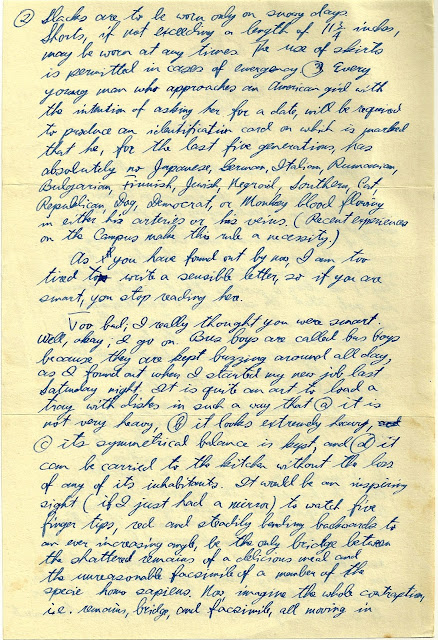 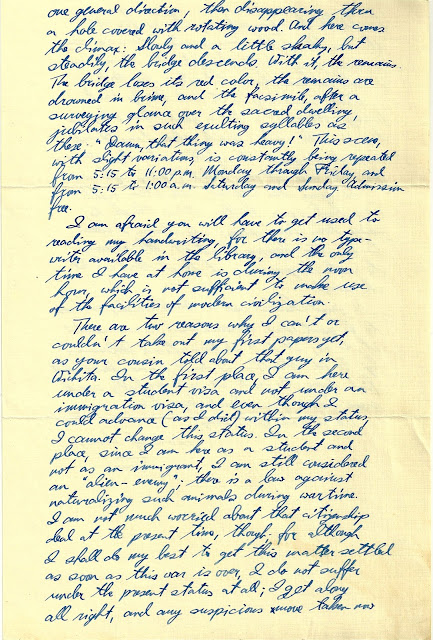 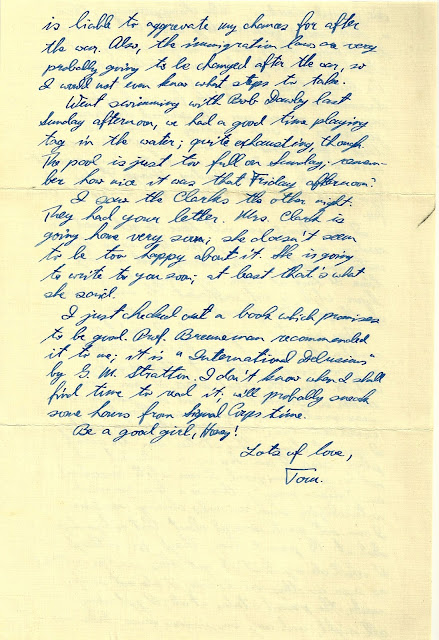 What do you mean the horizon on the sea is not farther than 10 miles away from you? Even a nearsighted Landratte like I can see the smokestack of a Swiss cruiser when the darn thing is 25 miles away, as long as the sky is blue and the larks are twirling (Why shouldn’t they?) So there’s nothing that Western Kansas has got, that the sea hasn’t. Furthermore, when I got tired gazing at trees, hills, and too many houses, all I had to do was to look up and there was more distance in the vertical than there is in all Kansas in the horizontal. Well, that settles that.
I had heard about the resignation of Dean Helen Moore; it happened just in between the ones of Mussolini and Hitler. She is to be replaced by a triumvirate, consisting of Mr. Doeppner, Tom, and me. It is expected that the changes in the political setup of the Women Situation at K. State will be drastic due to this change in Administration. The following new regulations have been forecast by unusually unreliable sources: (1) Non-kissproof lipsticks are outlawed. Every time a girl changes lipsticks, the kissproofness of this new lipstick will have to be tested by one of the members of the triumvirate. (2) Slacks are to be worn only on snowy days. Shorts, if not exceeding a length of 11 3/4 inches, may be worn at any times. The use of skirts is permitted in cases of emergency. (3) Every young man who approaches an American girl with the intention of asking her for a date, will be required to produce an identification card on which is marked that he, for the last five generations, has absolutely no Japanese, German, Italian, Romanian, Bulgarian, Finnish, Jewish, Negroid, Southern, Cat, Republican, Dog, Democrat, or Monkey blood flowing in either his arteries or his veins. (Recent experiences on the Campus make this rule a necessity.)
As you have found out by now, I am too tired to write a sensible letter, so if you are smart, you stop reading here.
Too bad; I really thought you were smart. Well, okay; I go on. Bus boys are called bus boys because they are kept buzzing around all day, as I found out when I started my new job last Saturday night. It is quite an art to load a tray with dishes in such a way that (a) it is not very heavy, (b) it looks extremely heavy, (c) its symmetrical balance is kept, and (d) it can be carried to the kitchen without the loss of any of its inhabitants. It would be an inspiring sight (if I just had a mirror) to watch five finger tips, red and steadily bending backwards to an ever increasing angle, be the only bridge between the unreasonable facsimile of a member of the specie homo sapiens. Now, imagine the whole contraption, i.e. remains, bridge, and facsimile, all moving in one general direction, then disappearing thru a hole covered with rotating wood. And here comes the climax: Slowly and a little shaky, but steadily, the bridge descends. With it, the remains. The bridge loses its red color, the remains are drowned in brine, and the facsimile, after a surveying glance over the sacred dwelling, jubilates in such exulting syllables as these: “Damn, that thing was heavy!” This scene, with slight variations, is constantly being repeated from 5:15 to 11:00pm Monday through Friday, and from 5:15 to 1:00am Saturday and Sunday. Admission free.
I am afraid you will have to get used to reading my handwriting for there is no typewriter available in the library, and the only time I have at home is during the noon hour which is not sufficient to make use of the facilities of modern civilization.
There are two reasons why I can’t or couldn’t take out my first papers yet, as your cousin told about that guy in Wichita. In the first place, I am here under a student visa and not under an immigration visa, and even thought I could advance (as I did) within my status I cannot change this status. In the second place, since I am here as a student and not as an immigrant, I am still considered an “alien-enemy”; there is a law against naturalizing such animals during wartime. I am not much worried about that citizenship deal at the present time, though; for although I shall do my best to get this matter settled as soon as this war is over, I do not suffer under the present status at all; I get along all right, and any suspicious move taken now is liable to aggravate my chances for after the war. Also, the immigration laws are very probably going to be changed after the war, so I would not even know what steps to take.
Went swimming with Bob Dawley last Sunday afternoon, we had a good time playing tag in the water; quite exhausting, though. The pool is just too full on Sunday; remember how nice it was that Friday afternoon?
I saw the Clarks the other night. They had your letter. Mrs. Clark is going home very soon; she doesn’t seem to be too happy about it. She is going to write to you soon; at best that’s what she said.
I just checked out a book which promises to be good. Prof. Brenneman recommended it to me; it is “International Delusions” by G.M. Stratton. I don’t know when I shall find time to read it; will probably sneak some hours from Signal Corps time.
Be a good girl, Honey!

Opa is in a real funny mood for this letter. First he teases Grandmother about her love of the Kansas horizon. I'm sure she's defending the flat lands, and Opa won't stand by and let her win that argument. He's right though, the sea has the flat lands of Kansas beat.

Then Opa moves on to his fantasies of running Kansas State as the new dean, with certain requirements for the women to wear kissable proof lipstick and short shorts. I'm loving this window into Opa's young boy mind, with his witty little quips and flirtations. I wonder if Grandmother's ex-fiance was this witty and cheeky. Probably not.

Opa's description of himself bussing tables had me rolling. I love the image of the hand bridged backward underneath the heavy tray, with Opa impressed each time he manages a heavy load. That's hard labor!

Opa explains his visa status in response to Grandmother's cousin that knew "that guy in Wichita." Poor Opa and Grandmother- how many cousins and well-meaning friends "new a guy who did..." and asked questions with their limited anecdotal knowledge that had nothing to do with Opa's situation? Opa was patient though in explaining it.

Opa mentions a book, International Delusions, which Jason bought for me to read. I'm with Opa- I'm not sure when I'll find the time to read it. ;)