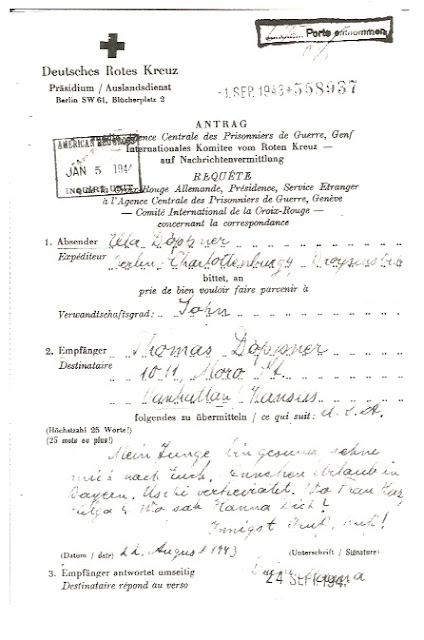 22 August 1943 (received Jan 5, 1944)
My boy, I am healthy, miss you all. Annchen on vacation in Bavaria. Uschi getting married. Where are Frau Herz, Helga? Where did Hanna see you?
Heartfelt greetings, kiss!
Yours, Mama

These short Red Cross letters do not give us much to go on. Again, Ella's task is simply to let Opa know she is still OK. Annchen is Opa's aunt (his father's sister) who has been a friend and help to Ella. Her absence may actually be a negative thing, especially if Ella has received any assistance from her. I was recently talking to Renate, Opa's cousin, when she said that her mother (who was not Jewish) would buy food for Martha (at this point, Martha has already been murdered in Auschwitz) and Ella with her "food cart" (I'm assuming like food stamps for rationing). Jews were not considered German citizens, so their access to German services or food through the ration cards was limited if not completely inaccessible. Ella and other Jews depended on the kindness of close friends - and very often such friends were impossible to find. It was a great risk to do this.

Uschi is Martha's daughter (Opa's cousin), who had escaped to England. Uschi likely had no knowledge of her parents' deaths, or even that they had gone missing.

I don't know who Helga or Frau Herz are, certainly don't know where they are. I'm guessing a long shot that maybe Herz is referencing Hirsch- which are the extended relatives that Ella has who live in New York. There is no chance now of her leaving Germany to go to the US now that the US and Germany are at war. Maybe she's asking if they've been in touch so that he can rely on them for help if he needs it? No idea.

Hanna is a relative that I think Opa might have mentioned seeing, or Ella is trying to urge him to contact out of familial connection.

Again, a short postcard from Ella leaves us with more questions than answers. We know she is alive. We don't know what her living conditions are, or how it is that she is still living at her apartment with Jews being shipped out by the thousands. All we know is that for one more day, Opa can take a bit of a breath. As always, she is "Yours, Mama."
Posted by Sarah Snow at Thursday, September 28, 2017