Tom, happy about your studies Stay strong! Admiring Miss Hertz, Greetings to her, Hanna, Rose, Shelleys. We are healthy; I teach. Hoping for a reunion! 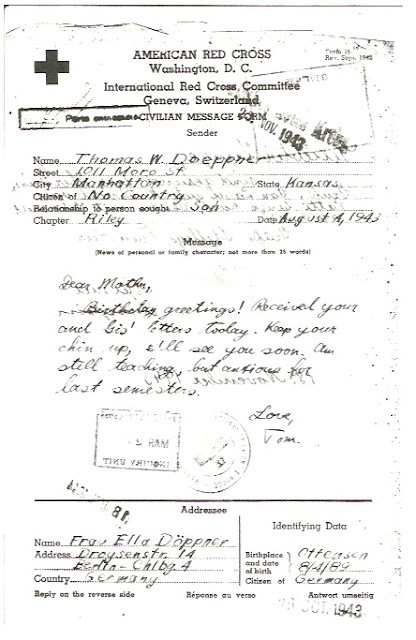 Red Cross Postcard from Opa to Ella Sent August 4th, 1943
(looks like it was received November 1943)

Message
(News of personal or family character; not more than 25 words)

Dear Mother,
Birthday greetings! Received your and Gis' letters today. Keep your chin up, I'll see you soon. Am still teaching, but anxious for last semesters.

A few thoughts on these. I imagine Opa's heart did a leap every time he received a Red Cross postcard from his mother. The delay of delivery was painful enough, but at least you knew that they were OK three months ago. The news within was not so important as the fact that his mother was still home, able to write. They were never able to share much (she never seemed to write about any of the family who went missing). I wonder if perhaps they may have tried and those letters never made it past the censors. Either way- proof of life is better than anything, and I can't imagine the sustained anxiety and brief relief that these Red Cross Postcards offered.

Opa wrote to Ella on her birthday, likely not a wonderful birthday for her, but I know she was so happy to receive his greetings eventually. Ella would have been so touched that he thought of her and wrote her on that day.

I've said this before, but the lightness that Opa writes with is a function of survival and forced optimism. "I'll see you soon." They both knew there was a small chance that was true, but the hope of it might be enough to keep their souls afloat.