It seems strangely appropriate that at this point in the blog when Opa's family is being deported to their deaths, news is scarce, and hope is waning- that we should happen upon a bright light. At this point in the timeline, my grandparents had been dating for at least a few months. There is a letter coming up where Opa mentions "that spring meeting on the hill" which I believe is when they met. (I've got a whole story about that that I'll share soon!) So let's say it was at least 3 months if not perhaps a year since they've met. Clearly since I'm calling her Grandmother, you already know about at least part of how their relationship works out.

We are going to delve into their love letters. Their love is a beacon of hope and light in the midst of darkness. These letters are the first things I saw and was able to read snippets of when I found that box of letters under my Grandmother's desk. These letters are what inspired the rest of the research.

Before we delve into the letters- I need to give you some background on my Grandmother and her family- like I did with Opa. Soon her siblings and home will be integral characters in this broadening story. So it's important you know them! 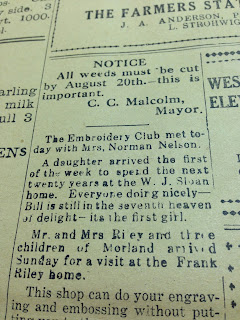 Reads: "A daughter arrived the first of the week to spend the next twenty years at the W.J. Sloan home. Everyone doing nicely - Bill is still in the seventh heaven of delight - it's the first girl."

Marjorie Ann Sloan was born on a farm in Selden, Kansas on August 14, 1922. She was the youngest, and the only female. She had three living brothers, a brother who was the next youngest had died at age 4 a year after she was born. In a way, Grandmother was a shining light after a terrible loss. Her older brothers were much older and did most of the work around the farm. Grandmother lived an unusual experience as a farm girl- because she was the youngest and only girl, her chores were minimal in comparison to her brothers. She spent a lot of time in her mother's garden. 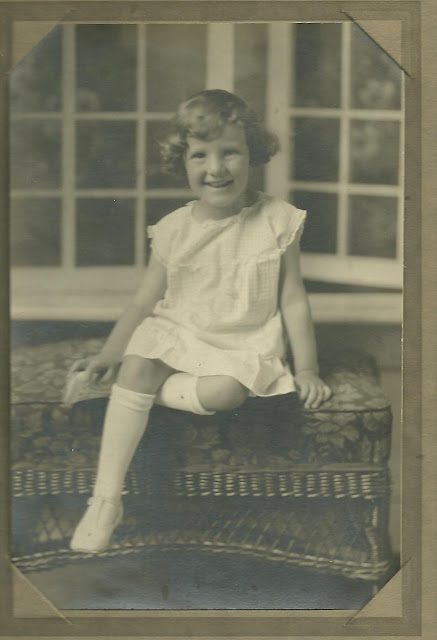 My Grandmother in August 1926 (4 years old)- Can you handle the cuteness?

I'm going to spend the next few blogs talking about Grandmother's family and how they came to live in the middle of nowhere. I've been there- miles and miles of flat land and endless horizon. But in this blog I want to talk briefly about my relationship with Grandmother.

My experience of Grandmother was a proper and polished woman. She always had a purse and a pair of shoes to match her outfit. She always wore hose. She could play the piano, organ, and bells- though none of her family inherited her musical talent (except maybe my uncle). She loved to whistle and sing little ditties. One of the songs she often sang was "Blue Skies, nothing but blue skies do I see"- which I understood more deeply when I witnessed the endless Kansas sky.

Every time it rained, even if it was flooding, Grandmother would say "I guess we needed the rain." She hated rain but was always grateful for it- I am certain that was her conditioned response to living through the Dust Bowl drought of the 1930s. Grandmother was 90 pounds dripping wet, with a delightful short crop of curly hair on her head. She had the tiniest body, with a large chest (another characteristic she did not pass on). I'm not sure she ever reached 5 feet tall, while Opa towered over her at 6 feet 2 inches. 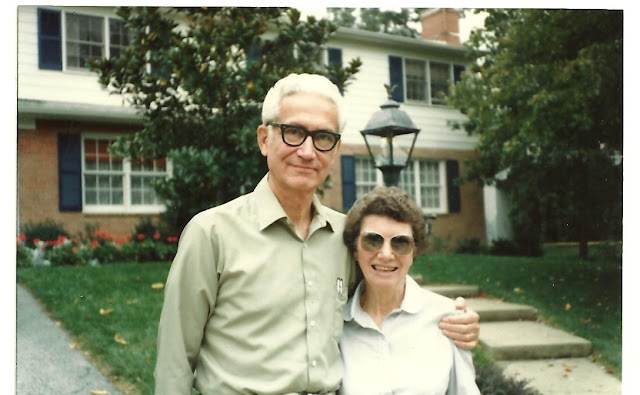 Grandmother and Opa in front of their Mount Vernon home, in the late 80s, early 90s.

She loved birds, and had just about every notecard, stationary, and notepad with birds on it that existed. She was an avid gardener, organic gardening before it was cool. She could feed a household with her vegetable garden, but her pride and joy were her rose bushes in the front yard (to the left of the driveway, so you can't see them in the picture above). Even in her later stages of dementia, if she walked by a rose bush she would prune it.

Grandmother was a serious proponent of dessert. She would eat measly portions of dinner, but always a healthy dessert. Never too much- but there wasn't a meal when she couldn't justify dessert. She wasn't the best cook, but was a wonderful baker. Her cherry and apple pies were legendary. She had a fun thing she would do with us granddaughters when she made pie: she would let us roll out the leftover crust dough, spread butter on it, and cover it with cinnamon sugar. We called them "sugar pies" and ate them like they were the most valued delicacy invented. Just the other day my older sister texted a picture of a sugar pie that she made with her children.

Grandmother was a preschool director and teacher. This education benefitted us as grandkids. She would play all sorts of word games, make crafts with us (including making play dough), and was very hands on.

She and Opa enjoyed the fine arts together: opera, musicals, art, and other concerts. They were so refined and fancy to me as a kid. Yet they also played with me and engaged.

Grandmother had a tissue, cough drop, and comb in every single purse she owned, and in most of her pockets. Looking back I'm wondering if she had allergy issues. There was a story that she had some sort of botched tonsillitis surgery, which meant that she had to take smaller bites of food because her throat wasn't completely right. No idea if that was true.

I loved Grandmother. She was more formal (as you might be able to tell from the name she chose for herself) -so it wasn't a mushy relationship - but it was warm. The more I learned about her background and where she grew up- the more she made sense to me, and the more I understood how Opa stole her heart.

When I lived in Fairfax, Virginia, I was about 30 minutes from Grandmother's apartment in a nice retirement home. I would visit occasionally and drink hot tea with her. She doted on my first son, who was such a show-stopper in her retirement home. The residents rarely saw anyone as young as I was, much less a baby. We would sit in the main dining room, with Grandmother beaming with pride. Many people would stop by our table to talk to the baby, to feel his soft cheeks and ask me questions about him. Grandmother wouldn't hesitate to claim him as her great-grandson, and though she formally insisted that we call her Grandmother, she happily settled for Gi-Gi as her name for the great-grandchildren.

My favorite job was the two years I took care of Grandmother. She was so grateful and kind. She certainly had a solid penchant for the guilt-trips if she thought I hadn't visited enough (I started writing my visits down in her calendar so I would get "credit" for the visit.) She adored my son, she had a stubborn streak of independence, but we managed the dance just right where she allowed me to help and I allowed her to feel independent. She asked about me and my family, asked about how my son was doing. She told stories of her childhood and watching her boys (my Dad and uncle) growing up. She was so excited for me when she found out I was having another boy, and get my own two boys like she had. We played cards, went to doctor's appointments, ate good food, and drank lots and lots of hot and lukewarm tea.

She was just as much my companion as I was hers. I miss her.

We moved her to Florida to live near my parents after she had fully healed from a medical emergency. I knew that my growing family and potential for a move would negatively affect her. She needed more than I could provide. So we moved her and my parents got the benefit of her whistling and quiet appreciation. They got to learn the little tricks for getting her to eat more and drink more water. They got to see her eat healthy desserts. My mother and I bonded over our little tricks of the trade when it came to taking good care of Grandmother. We were lucky- it wasn't too hard to keep her quality of life fairly high.

Then when none of us really expected it, she was gone. She did get to meet my second child, who was 6 months old as we gathered for our last Thanksgiving dinner with Grandmother. There was a moment of beautiful clarity that evening, when she looked up, looked around at the whole family sitting at the table and exclaimed: "We're all here!" She knew us- she always knew us, we were grateful that her dementia never stole her knowledge of her family. But in that moment she was distinctly aware that we were really all there. Shortly after we left my family's home, Grandmother came down with pneumonia, and quickly slipped away from us.

We would be back together again to bury her in December at Opa's grave in Arlington National Cemetery. The funeral at Arlington was a beautiful experience for me. It was sort of like closing a book that had been read many times and lovingly cared for. Of course I wish I could read it again, ask more questions, drink more tea, eat more ice cream and pie. But there in the cemetery, there in the perfectly crisp and proper burial grounds of the heroes of the United States - were buried my Grandmother and Opa together- brought together by completely bizarre and unlikely circumstances. They stayed together against all odds (and many predictions of their failure). They both had full lives. It was the right time and place for closing the book.

l look forward to diving into her family history and learning a little bit more about what made her who she was.
Posted by Sarah Snow at Saturday, May 13, 2017