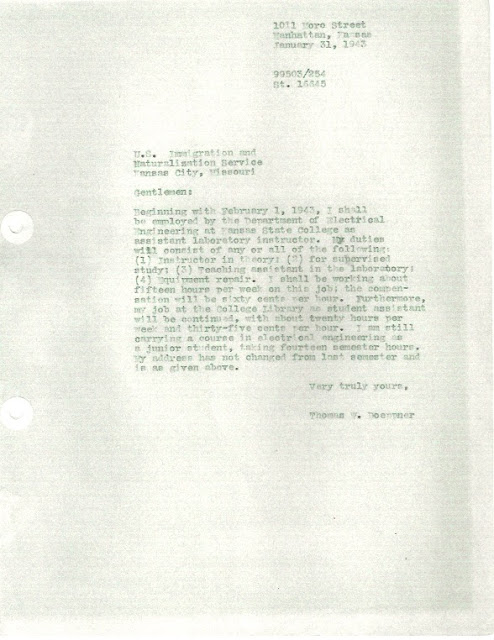 Letter from Opa to INS informing of his Jobs

Beginning with February 1, 1943, I shall be employed by the Department of Electrical Engineering at Kansas State College as assistant laboratory instructor. My duties will consist of any or all of the following: (1) Instructor in theory: (2) for supervised study; (3) Teaching assistant in the laboratory; (4) Equipment repair. I shall be working about fifteen hours per week on this job; the compensation will be sixty cents per hour. Furthermore, my job at the College Library as student assistant will be continued, with about twenty hours per week and thirty-five cents per hour. I am still carrying a course in electrical engineering as a junior student, taking fourteen semester hours. My address has not changed from last semester and is as given above.

Opa's working 35 hours a week while holding down 14 hours of engineering coursework. He reports his numbers to the INS, a requirement under the student visa, I'm sure. The nice thing about his having a student visa now is that he is able to work a steady job.

Just for fun I ran some of the numbers. Keep in mind that this is not exact. I didn't mess with taxes, and I assumed that Opa kept his jobs year round, which is likely not the case. Either way- with his pay he would have made around $828.00 a year, which if you plug in to the inflation calculator is the equivalent of about $11,944.81 per year. Still a low salary! I couldn't find information on what the tuition for Kansas State was in 1943, but I found tuition fee information for the University of Pennsylvania in 1943. Those fees, including room and board, were about $1000 a year, or the equivalent to $14,426.09 today. I would venture to say that Kansas State's tuition was smaller, but let's go with it. Right now- if he made a net sum of $828/year and the tuition including room and board is $1000/year, he's at a deficit. I looked up Kansas State's tuition this year, and added in all the fees (engineering students pay more!) and came up with about $27,200 without food costs. Food would add at least another $2-5,000. So let's say the total cost would be $30,000 today. Reverse the calculator and that would be $2,124.86 in 1943, but we know tuition costs have inflated at a much higher rate. My guess is the cost to go to Kansas State would have been around the $750-850 mark. Does anyone know?

Either way, unless Opa got some tuition help or his rent really is significantly cheaper than the average, he is still living frugally. His summer job will need to be well-paid!

His teaching gig does sound like a good deal, he gets paid nearly double his other job, and gains experience in his field. I'm sure Opa was thrilled for the opportunity! I wonder if he's done with harvest work forever or if the summer will still find him in the fields.