On May 15, Hilda and Hans Simon were arrested. On May 17th they were deported to the East: Auschwitz/Birkenau. They were murdered shortly after their arrival, but I have no idea how soon. I spoke with their grandson over email. He told me his grandmother survived for 2-3 months after being deported, but they aren't sure when she died. They are pretty sure that Hans was sent immediately to the gas chambers.

This is a little of their story as I know it, told in documents, pictures, and interviews.

Hilda Simon is Ella's cousin. Remember how August (Opa's Dad) left Ella and married her cousin? That cousin is Emma. Emma is Hilda's sister. This is Hilda: 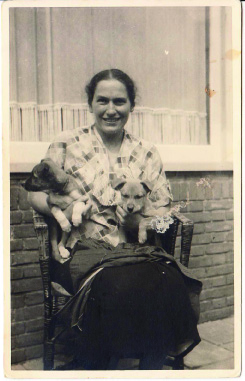 I'm not sure exactly how old Hilda is in this picture, but this is likely around the age that she was when Opa was a kid. She was younger than Ella, her birthday was April 12, 1896. Ella was born in 1889- so Hilda was seven years younger. That's about the age difference between myself and my younger sister. At this stage in life, she is my contemporary, so I imagine Hilda was similar for Ella.

The divorce between August and Ella and August's marriage to Emma did create some awkwardness between the cousins. When I spoke with Wolfgang on the phone before his death (Wolfgang Simon was Hilda's son), he told me that Ella did not attend the children's parties while August was still in Berlin, but once he moved to Amsterdam, she attended family events and a lot of the tension resolved a bit. He said they weren't upset with each other, it was just an awkward situation. Once August and Emma were out of the picture, the family resumed normal contact. Wolfgang was able to immigrate to Palestine (now Israel) with the help of his uncle, Werner, and he remembered saying goodbye to Ella. His parents, Hans and Hilda, remained in Berlin.

All information I will share on Hilda also relates to her husband, Hans. 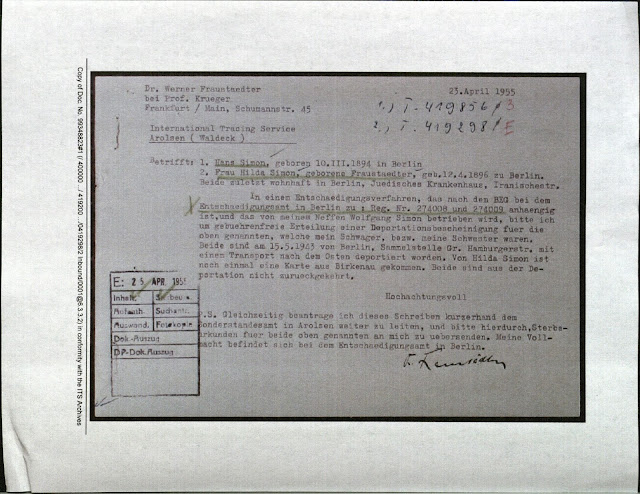 In a claim for compensation, which, according to the BEG, is attached to the Detention Office in Berlin to Reg. No. 274008 and 247009, and which is operated by my nephew Wolfgang Simon, I ask for a free deportation certificate for the above mentioned, which are my brother-in-law and sister, Respectively. Both were on 15.5.1943 of Berlin, collected from Gr. Hamburgerstr. (Street) With a transport to the East. A card from Birkenau came from Hilda Simon. Both have not returned from the deportation.

P.S. At the same time I request this letter to be forwarded to the special office in Arolsen waiter, and I ask you to send me sterba tickets for both of the above. My power of attorney is located at the Berlin Detention Office.

So clearly my google translate is not perfect here- but what we have here is Werner Fraustaedter, Hilda's brother, initiating the request for information, and what is formally called a "Certificate of Incarceration." He does this on behalf of Wolfgang, one of Hilda and Hans' sons (they had two: Wolfgang and Munni). This certificate is part of the paperwork required for Wolfgang to collect any kind of compensation (in terms of reparations). Notice that this request is submitted in 1955. The sheer mass of missing people has made this process of information gathering and process of attempting reparations long and tedious.  I may have mentioned this before, but I once met a holocaust survivor only a handful of years ago who was following an information trail with the hope that his sister may have also survived the war and was living in Australia. He had no way of finding out before the age of the internet. Nor did he have hope that he would find anything. Can you imagine? 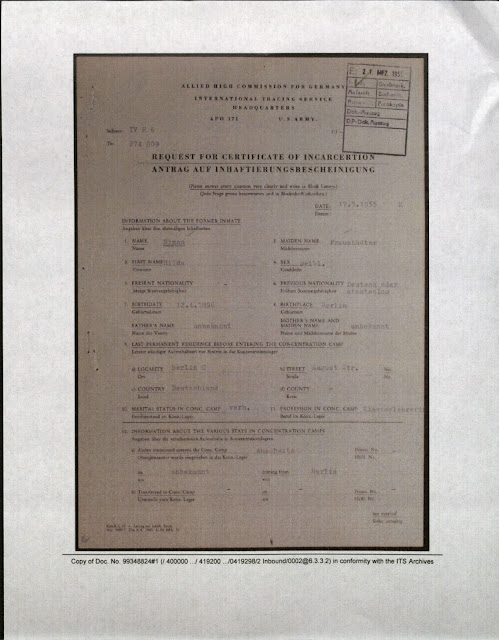 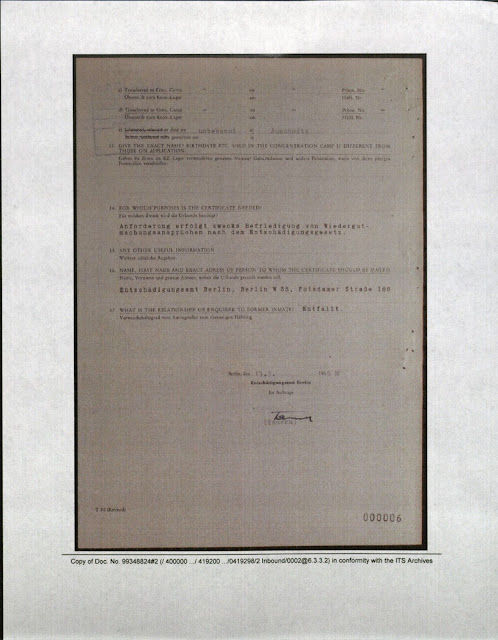 Official Request for Certificate of Incarceration

Request For Certificate of Incarceration

Information about the Former Inmate,

1. Name- Simon
2.Maiden Name - Fraustadter
3. First Name- Hilda
4. Sex - Female
5. Present Nationality --
6. Previous Nationality - German or stateless
7. Birthdate - 12.4.1896 (April 12th, 1896)
8. Birthplace - Berlin; Father's name - unknown  Mother's Name and maiden name - unknown
9. Last Permanent Residence Before Entering the Concentration Camp
a) Locality- Berlin C  b) Street -August Str.
c) Country - Germany   d) County --
10.Marital Status in Conc Camp - married
11. Profession in Conc Camp - teacher
12. Information about the various Stays in Concentration Camps
a) Above mention entered the Conc. Camp - Auschwitz
Prison Number. - --
on - Unknown - Coming from- Berlin
b) Tranferred to Conc Camp  -- on -- Prison Number. --
c-d) Transferred to Con. Camp ---
e) Liberated, released or died on - unknown in- Auschwitz
13. Give the exact name and birthdate etc used in the concentration camp if different from those on application: --
14. For Which purposes is the certificate needed?:
The request is made for the purpose of satisfying claims for reparation under the Compensation Act
15. Any other useful information: --
16. Name, First Name and Exact address of person to Whom The Certificate should be mailed:
Compensation Office Berlin, Berlin W 35, Potsdamer Strasse 186
17. What is the Relationship of Enquirer to Former Inmate? Removed

I'll talk more later on this information, but I wonder how they know that Hilda was a teacher at the concentration camp? Either way that makes my heart sink. Did she teach? How long did she survive there?! 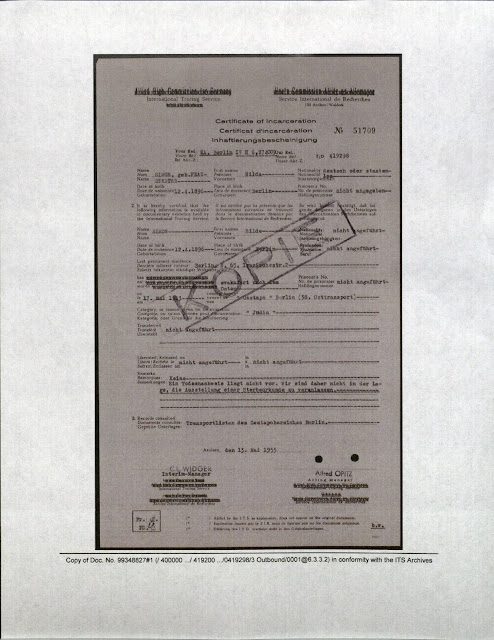 Copy of Certificate of Incarceration for Hilda Simon

It is hereby certified that the following information is available in documentary evidence held by the International Tracing Service.:
Simon, Hilda
Birthdate: April 12th, 1896
Birthplace: Berlin
Last Permanent Residence: Berlin, N. 65 Iranischestr. 2
Has Evacuated (Deported) to the east
on May 17, 1943
coming from "1 Gestapo" Berlin (38. East Transport)
Category, or reason given for incarceration: "Judin" (Jewish)
No information on transfers or liberation/release
Remarks: There is no proof of death. Therefore we are not in a position to issue a death certificate.

This certificate reads like Aunt Julie's certificate. There is no proof of death- meaning there is no trace left of them. They most definitely died.

The following are information cards on Hilda Simon found through various searches of archives. 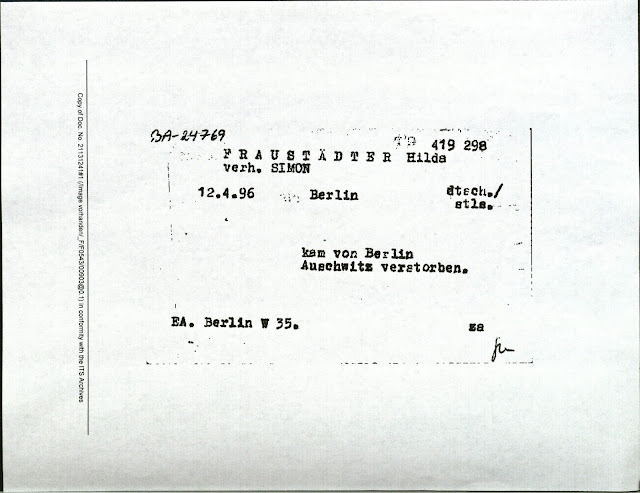 This card lists her name, birthdate and place, that she was deported from Berlin to Auschwitz where she was deceased. The next card is essentially the exact same information. 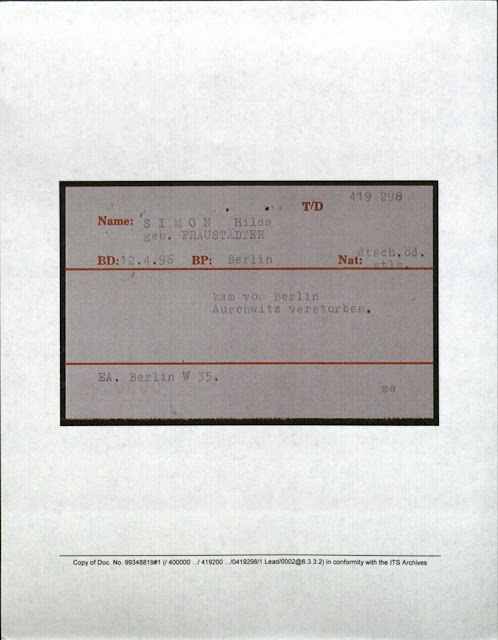 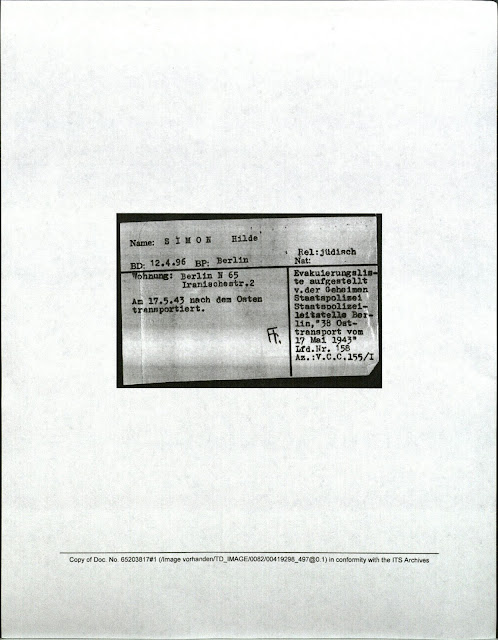 This card gives slightly more information. Her name is listed as is her birthdate and place. Her religion is listed as Jewish. It gives her last permanent address. Then it says "On May 17th, 1943, she was transported to the East. On the right column it reads: "Evacuation List by the SS (State Police) in Berlin "38 East Transport on May 17 1943" 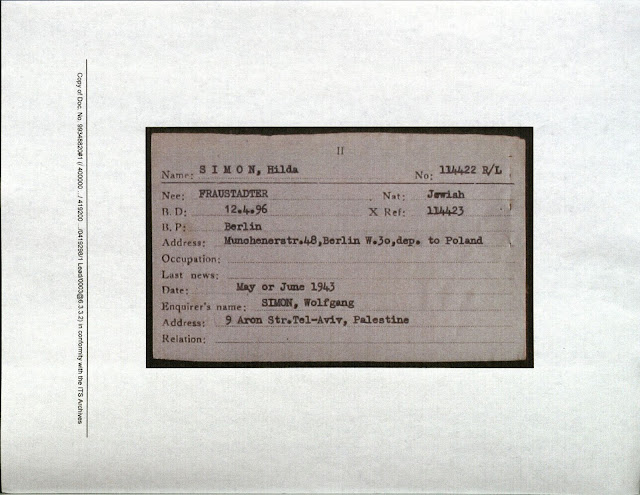 Here is another card, another short explanation of what happened- this one with similar information. Hilda Simon was Jewish, and deported May or June of 1943. This information was given to Wolfgang Simon, her son, who lived in Tel Aviv at the time.

All these cards, all the numbers and information traced through documents and lists- they all tell the same truncated story: these people were Germans, until one day they were arrested for being Jewish and sent East to Auschwitz where they were never heard from again. The trail, and their lives end there.

Hilda Fraustadter Simon, I see you in that picture. I see your smile and imagine your life as a loving mother and family member. I thank you for your son Wolfgang, whose voice I got to hear once. I thank you for your grandson, who keeps your name in is memory.  I am so sorry that this life did not give you space to age.

Hans Simon. I do not know very much about you but I honor you. I name you as a member of my family, as a part of my story that I will not forget. I am so sorry that this life did not allow you the privilege of old age in peace.
Posted by Sarah Snow at Tuesday, May 09, 2017