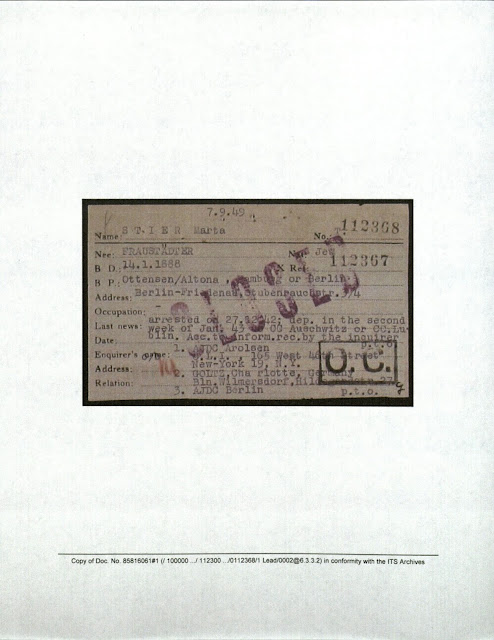 Information Card on Arrest of Martha (and Erich) Stier

Opa won't know this news until much, much later, perhaps after the war and likely after the date marked on the top of this card: remember it's European, so this card is dated September 7th, 1949. We may re-post this later, as a reminder that this is the date that Opa's family started to receive information about Aunt Martha and Uncle Erich.

But the date we are paying attention to in this post, for the sake of my readers following what happens chronologically, is December 27th, 1942. That is the day that Gestapo pounded on whatever door that the Stier's were hiding behind.

A quick reminder of who Martha (Marta) and Erich are: Martha is Ella's older sister. They were living with Ella for a short time. Martha and Erich have two children: Ursula and EllenRuth. Ursula is in England and Ellen Ruth is in the USA. She was able to get to the US around the same time Opa did. EllenRuth's daughter Ruth has the copies of the letters that Martha and Erich wrote to EllenRuth- pleading that she do everything she could to get them out. They were reduced to threats and shock-tactics, as if they thought Ellen Ruth didn't understand their predicament and wasn't trying hard enough- which is not true. But no one in Germany knew how hard it was to get the visas and the transport lined up for Jewish refugees, especially once the war expanded.

So two days after Christmas, within the week of Opa's sweet Christmas party in Kansas, his aunt and uncle were arrested by the Gestapo. Most of the time when people were arrested, they were taken to a holding place, something as bare as a cemetery or a ghetto-street or alley sectioned off for this purpose. They would be contained in this area for days to months before they were then transported to the train station and then deported East to the camp of the Nazi's choice.

Let me translate a bit of this information card for you. This card is one of the first bits of information that the family received after the war. It is not a final document in that it tells you what information has been gathered so far. This lists just Martha, but we assume that Erich is with Martha. Notice where it says "Nat." - which is short for nationality- and the answer is "Jew." Jews were deprived of their citizenship, so they had no nationality. Martha's birthday is listed as January 14, 1888. At the time of her arrest, she was almost 55. We would consider that to be young, but the life span for people in Germany at this time would normally be up to 60-65 years old, so she was considered elderly. BP is birthplace. The card then lists the "last news" heard, which is that she was arrested on December 27th, and then deported in January, either to Auschwitz or Lublin. At this point (in 1949), further information is unknown.

The enquirers of information are both an individual and a group. The AJDC is the American Jewish Joint Distribution Committee, who functioned largely as a clearing house of information on missing people after the war. The person, Charlotte Goltz of Berlin, might be Kurt's (Ella's little brother) wife.

So you as readers know only this for sure: Martha and Erich Stier were arrested and taken to some holding place on December 27th, 1942.

I can't really stomach it or process it. Darkness is all I can see. I can't even allow myself to put myself in their shoes for even a moment, just the thought of it is terrifying. I cannot even breathe while reading this card. Short, terse words about the worst that humanity can offer.
Posted by Sarah Snow at Monday, May 01, 2017