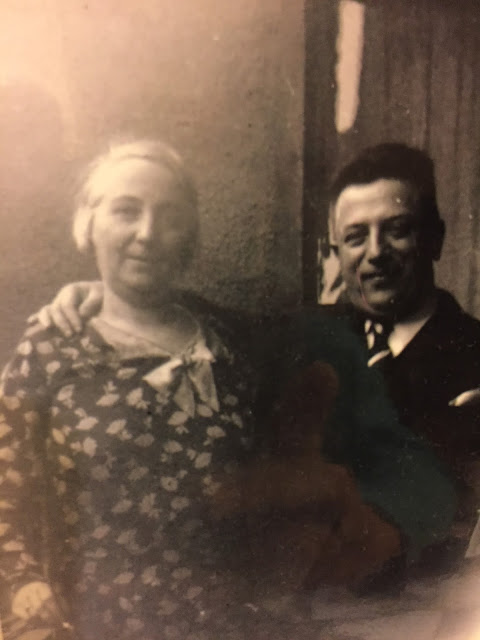 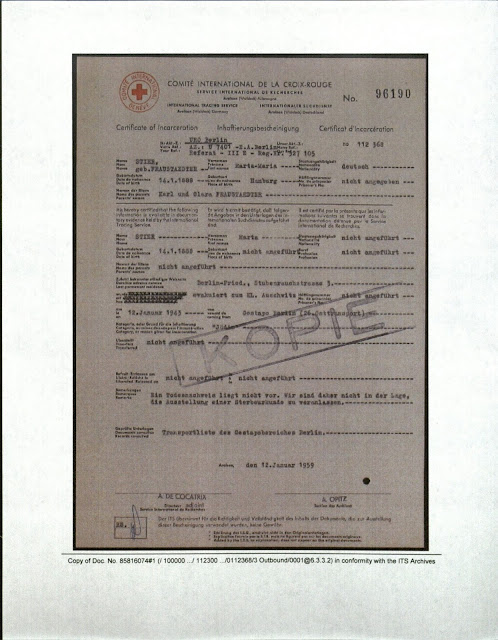 Translation:
I'm not going to translate this whole document for you, but essentially it is a certificate of incarceration for the family of Martha and Erich Stier. This document gives them evidence of Martha Stier's arrest and deportation on January 12, 1943 to Auschwitz. (Again, we assume and have documents that Erich was with Martha.)

Martha and Erich Stier were never registered in Auschwitz. No number was ever tattooed to their arms. No labor was forced. No survival was ever managed.

There is a paragraph at the bottom of the form that states:


"There is no evidence of death. We are therefore not in a position to arrange for the issue of a death certificate."

The document is dated January 12, 1959. So sixteen years after their deportation, someone was able to confirm that Martha and Erich had been arrested and then deported. But there was no evidence of their death. Not because they survived, but because all trace of them had completely disappeared.

Opa's aunt and uncle died in Auschwitz. We know they were put on a train to Auschwitz. If they survived the transport, they were almost certainly sent immediately to the gas chambers. I realized, my heart breaking, that Martha's birthday was January 14th. There is every bit of possibility that she died on her birthday. Ella most certainly knew she had disappeared. Would Opa have sent Martha a birthday note via Red Cross? Certainly her children did, EllenRuth and Ursula. It would never reach her. 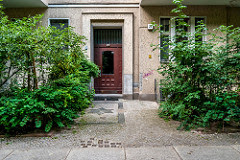 Last known Home of Erich and Martha Stier before being arrested 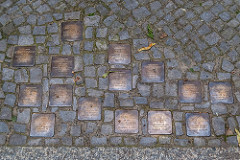 Stolpersteine of residents who were arrested and deported from this address 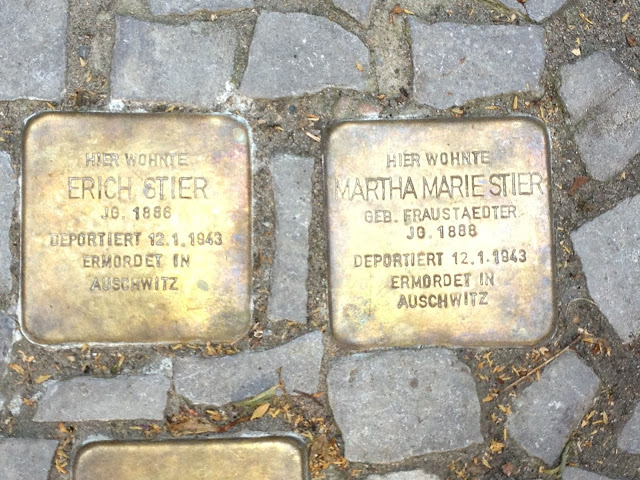 Martha and Erich Stier were murdered. These stones are the only grave or memorial they have. The stones are called Stolpersteine, or stumbling stones, placed into the walkway in front of their last residence of choice. (Many Jews were forced into framed ghetto housing, sort of a gathering spot before they were arrested and deported, so the organizers of the stone memorials have been diligent to make sure the stones are placed in front of what the people would have considered "home"- rather than their last residence.)

My parents and I were able to see these stones when I visited Berlin. I saw the stones, and the several that surrounded them. Jews often lived in the same area of town- so there were many clumps of stone memorials in front of apartment complexes in the so-called "Jewish" district of Charlottenburg.

When I saw them, I still didn't know much about Martha and Erich. I hadn't read Ella's letters yet. I hadn't talked to Martha's granddaughter and cried with her. I hadn't discovered that Martha's letters to her daughter Ellenruth had devolved into that of a woman begging for her life.

Martha tried everything to convince Ellenruth of the dire importance that they get out of Germany. The problem was that Ellenruth was trying as hard as she could, it was nearly impossible (as we know from Opa's efforts). Fear spiked in Martha and Erich and they told Ellenruth she wasn't trying hard enough. They told her they would die if she didn't succeed. They told her it would be her fault.

So here, in this document thirteen years later, Ellenruth knows that in some way, her parents were right. She couldn't get them out, and they most certainly did die. Ellenruth's life was forever changed by the very moment Hitler came into power. Everything would become infinitely more difficult. And while we talk about how people rise above and do amazing things, and the greatest generation, etc. etc. - I think it is important to note that for many people- it wasn't a hardship that they were able to grow from. It was a continuous time of intense trauma that they would never wake from. Ellenruth suffered from debilitating panic attacks for the rest of her life. Her daughter, Ruth, is a survivor of a troubled parent, and she has her own trauma associated with a lifetime of being in an unstable environment. We laughed together as she quipped "I'm surprised at how functional I am! Lots of therapy!" We were able to laugh together, because we also cried together. My visit with Ruth reminded me that while my Opa's story has some beautiful moments of redemption, of hope, and of courage.... the trauma is still there.

Those numbers, the 6 million Jews you hear about- their children and grandchildren are with us. Some of them had no legacy to leave, they were all wiped out. But to call the survivors lucky is to forget their burden.

I don't know what to do with this. I don't know the proper way to carry this burden. So once again I simply name these people, my family, to honor them and remember them:
(The first picture has in the middle, Martha, and on the right, Ella; the second picture is Martha; the third picture is Erich) 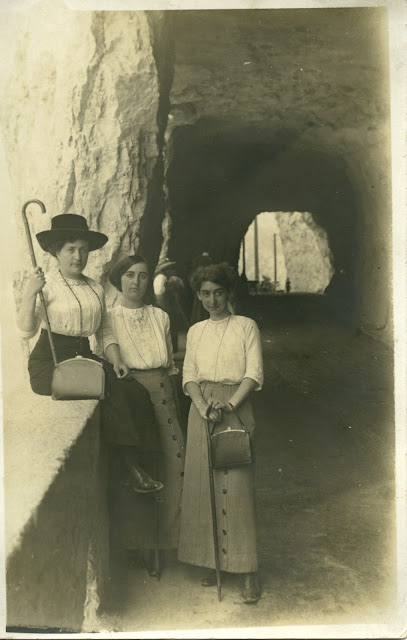 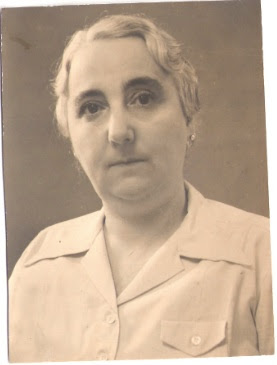 Martha Fraustadter Stier and Erich Stier: I remember you today. I grieve for the life you should have had. I love your granddaughter, and thank you for the gift of her friendship. 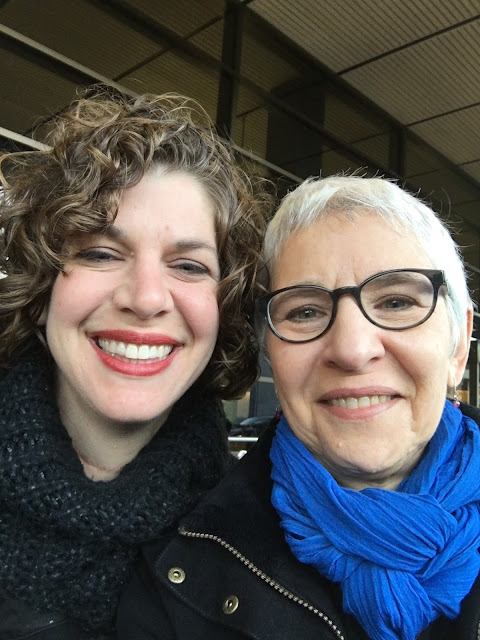 Me and Ruth- the granddaughter of Martha and Erich Stier