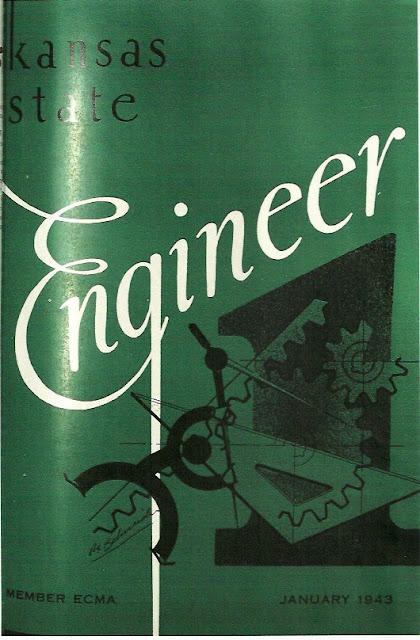 Below: Table of Contents from this publication, Opa's article is found on page 10. 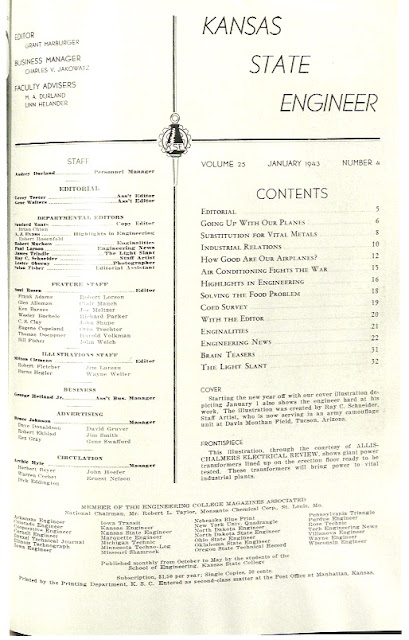 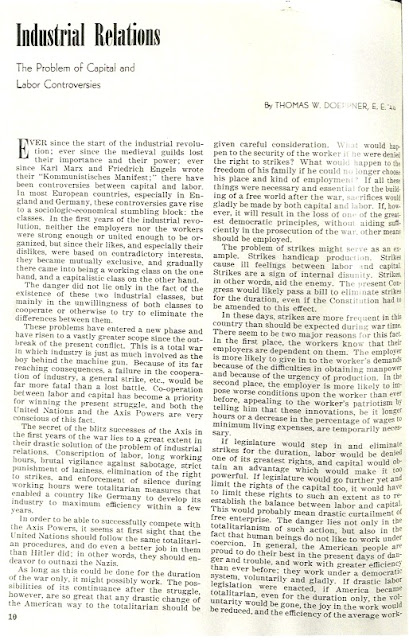 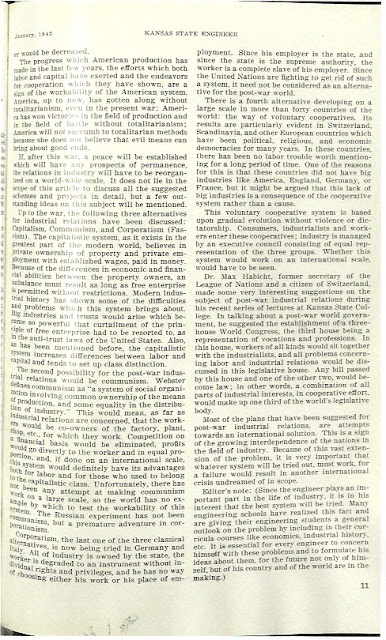 Industrial Relations
The Problem of Capital and Labor Controversies


Editor’s note: (Since the engineer plays an important part in the life of industry, it is in his interest that the best system will be tried. Many engineering schools have realized this fact and are giving their engineering students a general outlook on the problem by including in their curricula courses like economics, industrial history, etc. It is essential for every engineer to concern himself with these problems and to formulate his ideas about them, for the future not only of himself, but of his country and of the world are in the making.)

How's that for an engineering article?!

This article reminds me of how war and international relations affect everything, even how engineers are learning how to do their work. The right to strike and other legislative concerns are of utmost importance to each and every worker and big industry owner. The mechanic at school should pay just as much attention to the laws of the nation as the owner of the oil field. The balance of power is constantly shifting.

Germany's frightening efficiency in industry might have been effective, but Opa's argument is that it wasn't sustainable, and it shouldn't be. Human rights win out over productivity every time. That, to Opa, is the American way. He's quite proud of America, which rings true to my experience of Opa. He spoke of the United States with the highest respect and nearly idolized it. It was everything Germany wasn't at the time.

It struck me that in this article, there seemed to be a strong sense that the war will end soon, and that it will end in favor of the US. An article about how to organize the world's industrial relations post-war would not happen if there was heightened anxiety about whether or not the US will have a say in the matter. That seems weird to me. It's still a long road ahead.

I'm also nearly wistful, there was so much potential in the post-war time. The aftermath of the second world war was perhaps more congenial and humanitarian than the first world war in terms of reconstruction for Germany and other war-torn (even if enemies) countries. However, the immediate conflict with Russia likely put a huge dent into what may have been a potentially global cooperative. Perhaps I'm being naive, but considering that Germany is now a beacon of sanity and democracy, as well as Japan, it seems anything is possible.

The three-house world congress sounds really interesting. I wonder if United Nations was a variation of that idea. Are there representatives from varying professions in the UN? I'm realizing just how little I know about international cooperative organizations. I guess I need to do some more reading!

I really enjoyed the article, and felt like I learned a little something too. I know that the problem of industrial relations cannot be explained or solved in a two page article in the Kansas State Engineer, but I appreciate being able to read part of the discussion.

I hope you learned a little. It is a good reminder that what happens in the world, in the government, and even in how we end conflict with other nations, can have a dramatic affect on our work day.
Posted by Sarah Snow at Monday, May 01, 2017