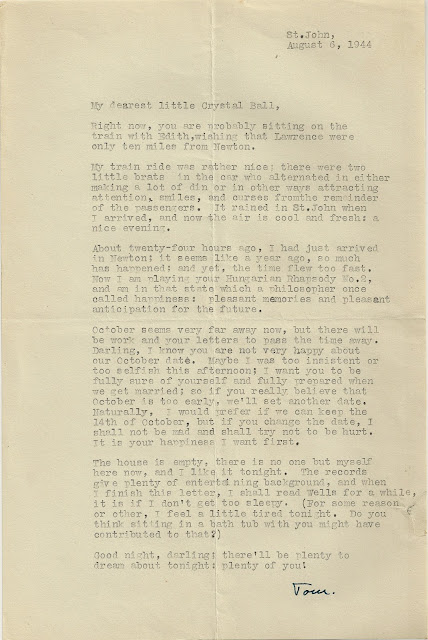 Letter from Opa to Grandmother, August 6, 1944
Transcription:
St. John,
August 6, 1944
My dearest little Crystal Ball,
Right now, you are probably sitting on the train with Edith, wishing that Lawrence were only ten miles from Newton.
My train ride was rather nice; there were two little brats in the car who alternated in either making. lot of din or in other ways attracting attention, smiles, and curses from the reminder of the passengers. It rained in St. John when I arrived, and now the air is cool and fresh: a nice evening.
About twenty-four hours ago, I had just arrived in Newton; it seems like a year ago, so much has happened; and yet, the time flew too fast. Now I am playing your Hungarian Rhapsody No.2, and am in that state which a philosopher once called happiness: pleasant memories and pleasant anticipation for the future.
October seems very far away now, but there will be work and your letters to pass the time away. Darling, I know you are not very happy about our October date. Maybe I was too insistent or too selfish this afternoon; I want you to be fully sure of yourself and fully prepared when we get married; so if you really believe that October is too early, we'll set another date. Naturally, I would prefer if we can keep the 14th of October, but if you change the date, I shall not be mad and shall try not to be hurt. It is your happiness I want first.
The house is empty, there is no one but myself here now, and I like it tonight. The records give plenty of entertaining background, and when I finish this letter, I shall read Wells for a while, it is if I don't get too sleepy. (For some reason or other, I feel a little tired tonight. Do you think sitting in a bath tub with you might have contributed to that?)
Good night, darling; there'll be plenty to dream bout tonight: plenty of you!
Tom. 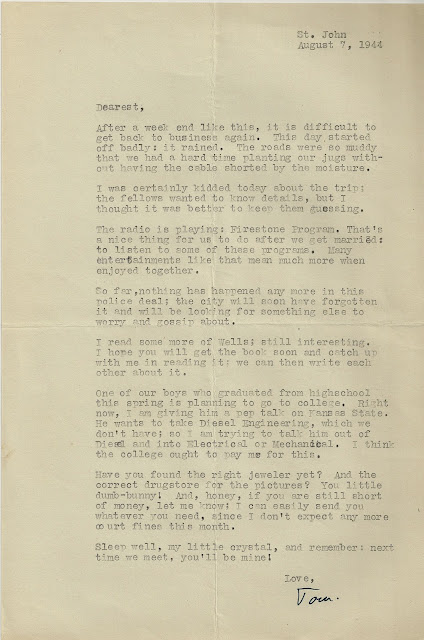 Letter from Opa to Grandmother, August 7, 1944.
Transcription:
St. John
August 7, 1944
Dearest,
After a week end like this, it is difficult to get back to business again. This day started off badly: it rained. The roads were so muddy that we had a hard time planting our jugs without having the cable shorted by the moisture.
I was certainly kidded today about the trip; the fellows wanted to know details, but I thought it was better to keep them guessing.
The radio is playing: Firestone Program. That's  nice thing for us to do after we get married: to listen to some of these programs. Many entertainments like that mean much more the n enjoyed together.
So far, nothing has happened any more in this police deal; the city will soon have forgotten it and will be looking for something else to worry and gossip about.
I read some more of Wells; still interesting. I hope you will get the book soon and catch up with me in reading it; we can then write each other about it.
One of our boys who graduated from high school this spring is planning to go to college. Right now, I am giving him a pep talk on Kansas State. He wants to take Diesel Engineering, which we don't have; so I am trying to talk him out of Diesel and into Electrical or Mechanical. I think the college ought to pay me for this.
Have you found the right jeweler yet? And the correct drugstore for the pictures? You little dumb-bunny! And, honey, if you are still short of money, let me know; I can easily send you whatever you need, since I don't expect any more court fines this month.
Sleep well, my little crystal, and remember: next time we meet, you'll be mine!
Love,
Tom.
To sum up a few things from these two letters:
-looks like Edith was a part of the weekend, but Opa got over it;
-the wedding has been pushed to October 14th which is still too soon by Grandmother's standards;
-no news about the police business so things are quieting down, and...
-Opa is still madly in love with Grandmother despite the fact that she pushed their wedding date back and brought a friend to their romantic weekend.
Bless it.
I was particularly touched by his vision of their married future: sitting together and listening to radio programs. The Firestone Program was a show highlighting classical music and opera music (definitely a shared interest of Grandmother and Opa). I love what a lovely and simple hope he has for his marriage. He does not have a lot of examples of steady, happy marriages from his family of origin. So he has had to compile his wishes from other examples. I wonder if he took cues from the Shelleys and other families who took him in. I'm sure he also had the joy of creating his own ideas and dreams of what a marriage could look like. I love that he did not lose faith and had not been made bitter by life's example so far.
It seems like they not only set the wedding date for October 14th, but also that will be the next time they see each other! Seems like a long time!