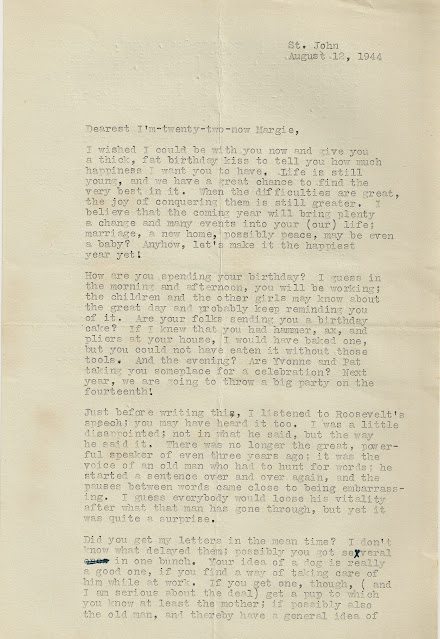 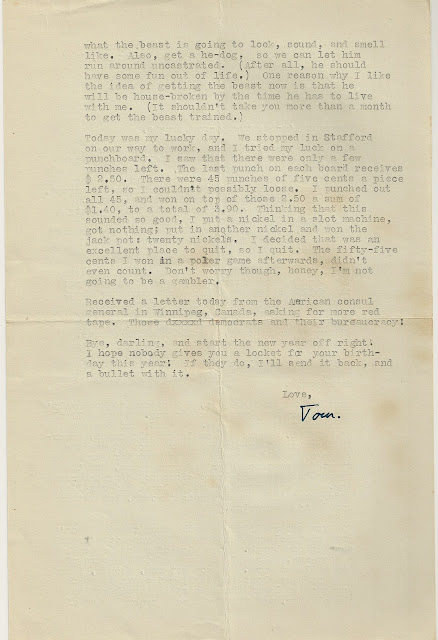 Letter from Opa to Grandmother, August 12, 1944.
Transcription:
St. John
August 12, 1944
Dearest I'm-twenty-two-now Margie,
I wished I could be with you now and give you a thick, fat birthday kiss to tell you how much happiness I want you to have. Life is still young, and we have a great chance to find the very best in it. When the difficulties are great, the joy of conquering them is still greater. I believe that the coming year will bring plenty a change and many events into your (our) life; marriage, a new home, possibly peace, may be even a baby? Anyhow, let's make it the happiest year yet!
How are you spending your birthday? I guess in the morning and afternoon, you will be working; the children and the other girls may know about the great day and probably keep reminding you of it. Are your folks sending you a birthday cake? If I knew that you had hammer, ax, and pliers at your house, I would have baked one, but you could not have eaten it without those tools. And the evening? Are Yvonne and Pat taking you someplace for a celebration? Next year, we are going to throw a big party on the fourteenth!
Just before writing this, I listened to Roosevelt's speech; you may have heard it too. I was a little disappointed; not in what he said, but the way he said it. There was no longer the great, powerful speaker of even three years ago; it was the voice of an old man who had to hunt for words; he started a sentence over and over again, and the pause between words came close to being embarrassing. I guess everybody would loose his vitality after what that man has gone through, but yet it was quite a surprise.
Did you get my letter in the mean time? I don't know what delayed them; possibly you got several in one bunch. Your idea of a dog is really a good one, if you find a way of taking care of him while at work. If you get one, though, (and I am serious about the deal) get a pup to which you know at least the mother; if possibly also the old man, and thereby have a general idea of what the beast is going to look, sound, and smell like. Also, get a he-dog, so we can let him run around uncastrated. (After all, he should have some fun out of life.) One reason why I like the idea of getting the beast now is that he will be house-broken by the time he has to live with me. (It shouldn't take you more than a month to get the beast trained.)
Today was my lucky day. We stopped in Stafford on our way to work, and I tried my luck on a punchboard. I saw that there were only a few punches left. The last punch on each board receives $2.50. There were 45 punches of five cents a piece left, so I couldn't possibly loose. I punched out all 45, and won on top of those 2.50 a sum of $1.40, to a total of 3.90. Thinking that this sounded so good, I put a nickel in a slot machine, got nothing; put in another nickel and won the jackpot: twenty nickels. I decided that was an excellent place to quit, so I quit. The fifty-five cents I won in a poker game afterwards, didn't even count. Don't worry though, honey, I'm not going to be a gambler.
Received a letter today from the American Counsel General in Winnipeg, Canada, asking for more red tape. Those dxxxxd democrats and their bureaucracy!
Bye, darling, and start the new year off right! I hope nobody gives you a locket for your birthday this year! If they do, I'll send it back, and a bullet with it.
Love,
Tom.
Grandmother's birthday is August 14th. Opa is planning his letter to arrive on her birthday, as he and his family tried to do with one another in their letters across the Atlantic. He has such sweet wishes for her celebration, and hopes for their future. He treats her birthday almost like New Years: with resolutions and hope for the coming year: marriage, a home, even a baby. He knows the next year will bring a lot of change and challenge, but he is buoyed by his love for her.
When Opa joked about sending her a cake that would require heavy tools to eat, I remembered something.
Opa's mother, Ella, had just celebrated her 55th birthday on August 4, in Theresienstadt. I actually know a little bit about how she celebrated, thanks to the recollection of Renate, Opa's cousin. Renate was Kurt's child, and Ella was one of few people who knew her little brother had a child. Even the rest of Ella's family was in the dark about this surprise baby. Ella adored Renate, and Renate's mother, Lotte. Lotte was so kind and caring towards Ella. Lotte was not Jewish, and technically her daughter had not been identified as having Jewish "blood," so Lotte was taking great risks to be in as close relationship with Ella.
Here is a memory that Renate shared with me (Mrs. Ruhstadt was Ella's neighbor):

Once my mother and Mrs. Ruhstadt sent her a small package for her birthday. They barely had enough themselves, since the food rations were very meager.

But they did send her some soap, a candle and ”coffee substitute” (Bluem’chen Kaffee is slang for it might smell like coffee, but it is not), a small well washed NIVEA tin filled with margarine and a small home baked cake.

The cake was so much examined, by totally it (was cut) into pieces (something could have been hidden in it)

Ella wrote to my mother:

Everybody in camp got only a tiny bite of my crumbly cake, but it was a celebration and my most beautiful birthday since a long time.

I could still cry when I think about it, how very cruel!

Birthdays were something Ella made special efforts for, and for some reason seeing Opa mirror that for Grandmother, and knowing that Ella had a birthday package even in a concentration camp, it warms my heart.
Opa goes on to share his thoughts on Roosevelt's speech, which of course caused me to go search the speech (it's not that exciting in transcript), and to check about his health. Opa was right, Roosevelt was not healthy. In fact, Roosevelt died in April, 1945. His health had declined over the years, but he also had been through quite a lot. He led the United States out of the Depression, and through (and almost out of) the war. In January he would be sworn in for his fourth term, which he only served a short time until he died. Yet, his death was still a shock for many, but folks like Opa noticed he was fading.
Opa encourages Grandmother to get a male dog, train it, and let it roam the streets, lol. He and Grandmother had dogs on and off their whole married life, but once they retired, they favored ease of travel over dog-ownership. I never got to meet any of their dogs, but my Dad remembers them fondly.
Opa had a lucky day at his miniature gambling streak. First he wins by favorable odds, but then he makes a little more with luck. He writes a whole paragraph about it that ends with "don't worry, I won't become a gambler." Good news, he was true to his word on that.
He is still working on his immigration paperwork, a field he is becoming expert it.
He mentions that if anyone sends her a locket, he'll send it back with a bullet in it. He's half-joking, but I suspect there is something behind this joke. I wonder if Archie sent Grandmother a locket for her last birthday?
The reason why I suspect that is because something similar happened to me. I had a boyfriend who I was very on-again-off-again with (mostly my fault). The first Valentine's Day I was dating Jason (who is now my husband), I received a beautiful bouquet of roses. The main problem was, it was from the on-off guy. Jason asked who the flowers were from, and I was like "um, so, we broke up, but he sent me flowers." He brushed it off and it was a nice bunch of flowers. He did tease me about it and the next year he asked if he should expect any other past boyfriends to send flowers. In my ex-boyfriend's defense, I had only just started dating Jason. But no more flowers came. Or lockets.
Posted by Sarah Snow at Friday, January 15, 2021