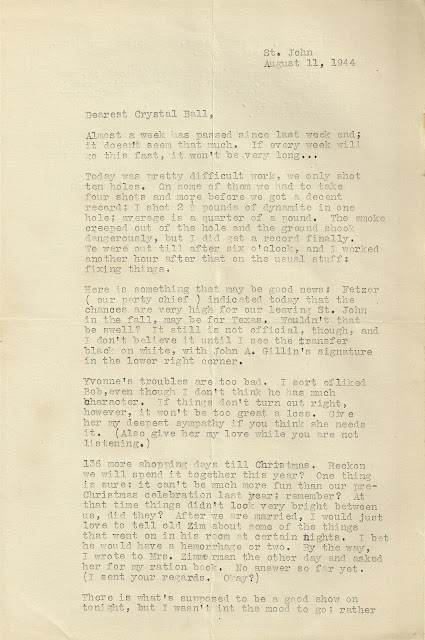 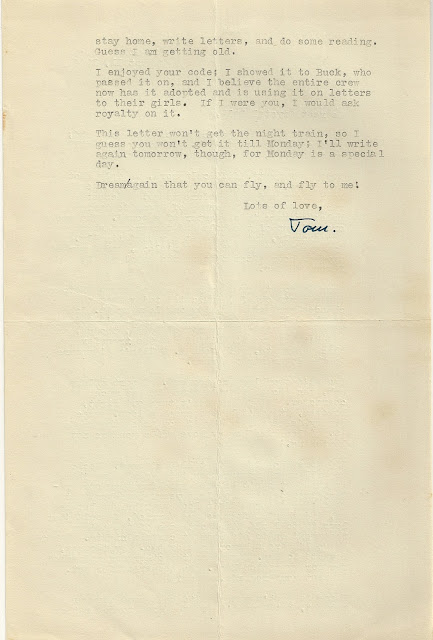 Letter from Opa to Grandmother, August 11, 1944.
Transcription:
St. John
August 11, 1944
Dearest Crystal Ball,
Almost a week has passed since last week end; it doesn't seem that much. If every week will go this fast, it won't be very long...
Today was pretty difficult work, we only shot ten holes. On some of them we had to take four shots and more before we got a decent record; I shot 2 1/2 pounds of dynamite in one hole; average is a quarter of a pound. The smoke creeped out of the hole and the ground shook dangerously, but I did get a record finally. We were out till after six o'clock, and I worked another hour after that on the usual stuff: fixing things.
Here is something that may be good news: Fetzer (our party chief) indicated today that the chances are very high for our leaving St. John in the fall, may be for Texas. Wouldn't that be swell? It still is not official, though, and I don't believe it until I see the transfer black on white, with John A. Gillin's signature in the lower right corner.
Yvonne's troubles are too bad. I sort of liked Bob, even though I don't think he has much character. If things don't turn out right, however, it won't be too great a loss. Give her my deepest sympathy if you think she needs it. (Also give her my love while you are not listening.)
136 more shopping days till Christmas. Reckon we will spend it together this year? One thing is sure: it can't be much more fun than our pre-Christmas celebration last year; remember? At that time things didn't look very bright between us, did they? After we are married, I would just love to tell old Zim about some of the things that went on in his room at certain nights. I bet he would have a hemorrhage or two. By the way, I wrote to Mrs. Zimmerman the other day and asked her for my ration book. No answer so far yet. (I sent your regards. Okay?)
There is what's supposed to be a good show on tonight, but I wasn't in the mood to go; rather stay home, write letters, and do some reading. Guess I am getting old.
I enjoyed your code; I showed it to Buck, who passed it on, and I believe the entire crew now has it adopted and is using it on letters to their girls. If I were you, I would ask royalty on it.
This letter won't get the night train, so I guess you won't get it till Monday; I'll write again tomorrow, though, for Monday is a special day.
Dream again that you can fly, and fly to me!
Lots of love,
Tom.
When I was a kid, I had a recurring dream of flying. All sorts of occasions to fly: for fun, escape, to rescue someone, or just to show I could. Some mornings I would wake up on the floor, my dreams transferring into my limbs and flying me off the bed!
I like to think of Grandmother also enjoying dreams of flying, exploring and soaring above the clouds.
I think we get a little more insight into the kind of thing that Grandmother writes to Opa. I don't know why I felt like it would all be fairly serious, but hearing Opa refer to her flying dreams and some type of code she made up for letters, brought me so much joy! She was a young woman in love, not too serious.
I guess things were worse than we thought over that Christmas break the year prior. When Opa refers to "Zim," he's talking about Mr. Zimmerman, the landlord of the place Opa lived in. I guess Opa is referring to some arguments, which I weirdly wish I knew more about. I never saw Grandmother and Opa argue, so I would be curious what that would even look like!
Opa is hoping the rumors of being sent to Texas are true. As much as he says the window-peeping incident seems to be fading away, he's ready to leave town altogether. I know he said he was getting old, but I wonder if his hesitancy to go out on the town had something to do with not wanting to be around people.
Opa is hoping for a change, sooner would be better.
Posted by Sarah Snow at Wednesday, January 13, 2021