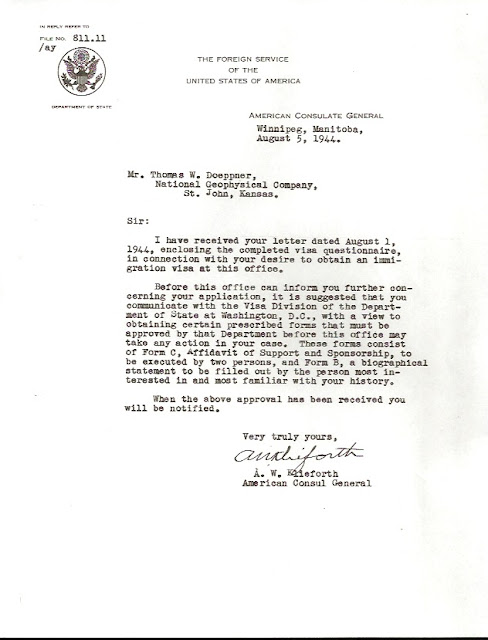 Letter from A.W. Elieforth (American Consul General, Canada) to Opa, August 5, 1944
Transcription:
American Consulate General
Winnipeg, Manitoba,
August 5, 1944.
Mr. Thomas W. Doeppner,
National Geophysical Company,
St. John, Kansas,
Sir:
I have received your letter dated August 1, 1944, enclosing the completed questionnaire, in connection with your desire to obtain an immigration visa at this office.
Before this office can inform you further concerning your application, it is suggested that you communicate with the Visa Division of the Department of State at Washington, D.C., with a view to obtaining certain prescribed forms that must be approved by that Department before this office my take any action in your case. These forms consist of Form C, Affidavit of Support and Sponsorship, to be executed by two persons, and Form B, a biographical statement to be filled out by the person most interested in and most familiar with your history.
When the above approval has been received you will be notified.
Very truly yours,
A. W. Elieforth
American Consul General
So, no answer on what a helpful affidavit looks like, but at least Opa got a quick response from the office. He needs two affidavits (or at least two folks to sign), and a biographical statement "filled out by the person most interested in and most familiar with your history." What a weird description for who should fill that out!
"Hi, are you the most interested in me?"
I assume that person would be Grandmother, but that seems weird to have your fiancé fill out paperwork about you. So maybe Opa will ask his librarian friend and former boss, Eileen? He is going to see Grandmother this weekend, so if this letter arrives to him before he leaves, he may very well ask her to fill it out.
Opa is hoping that the window-seeker incident is fading into the background and that it will only be a small blip on his radar. That way he can move forward with his plans for immigration, and marrying Grandmother!
Posted by Sarah Snow at Friday, January 08, 2021