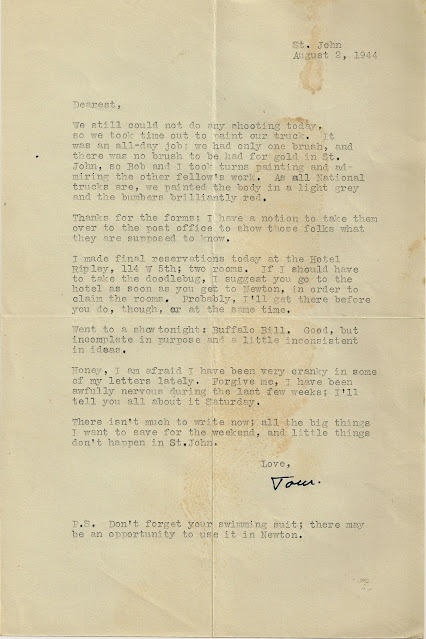 Letter from Opa to Grandmother, August 2, 1944.
Transcription:
St. John
August 2, 1944
Dearest,
We still could not do any shooting today, so we took time out to paint our truck. It was an all-day job; we had only one brush, and there was no brush to be had for gold in St. John, so Bob and I took turns painting and admiring the other fellow's work. As all National trucks are, we painted the body in a light grey and the bumbers(sic) brilliantly red.
Thanks for the forms; I have a not in to take them over to the post office to show those folks what they are supposed to know.
I made final reservations today at the Hotel Ripley, 114 W 5th; two rooms. If I should have to take the doodlebug, I suggest you go to the hotel as soon as you get to Newton, in order claim the rooms. Probably, I'll get there before you do, though, or at the same time.
Went to a show tonight: Buffalo Bill. Good, but incomplete in purpose and a little inconsistent in ideas.
Honey, I am afraid I have been very cranky in some of my letters lately. Forgive me, I have been awfully nervous during the last few weeks; I'll tell you all about it Saturday.
There isn't much to write now; all the big things I want to save for the weekend, and little things don't happen in St. John.
Love,
Tom.
P.S. Don't forget your swimming suit; there may be an opportunity to use it in Newton.
I had a "special friend" in college (we dated, but never got serious, and we were both on the same page about it) who graduated and got a job in Huntsville, Alabama. He was a smart guy and the job was a pretty good gig, and used his gifts and degree, which for a college grad is pretty unusual! But I remember when I would catch up with him, he seemed unhappy. He wasn't really fitting in with the "good ol boys" crowd, and he was surrounded by a lot of ex-military "macho" men. My friend was not a macho-man. He was kind, thoughtful, and had very little trace of what I call toxic masculinity. Even though his job fit his skill set, the people around him were making him miserable. He ultimately found another job in a work place that had a more kind and open culture. It was amazing what a difference it made for him.
I wonder if something along these lines is going on for Opa. Is he not fitting in with the "good ol' boys" of St. John, Kansas? Is his German-background getting him bad attention? Or perhaps his Jewish background? Opa confesses that he has been a bit grumpy, and his grumpiness dates further back than his window-peeking incident. Perhaps that night was the culmination of events rather than the beginning.
He's not surrounded by his friends from school, his fiancé is not around (and keeps moving the wedding date). He hasn't heard from his family (except maybe his sister Patti, who likely has not great news). Opa's family (and national) culture is to sort of grin-and-bear it. Don't burden people with your sob stories. I imagine he has been trying to focus on the positive in St. John, but he finally can't bear it that much longer. He is SO ready to see Grandmother, not only to enjoy her company, but also to be able to be honest and vulnerable. Putting up a cheerful facade is exhausting, especially if you are really struggling.
I don't know exactly what is going on with Opa, what his struggles are, but I know that he's starting to crack a little.
Not the most important part of the letter: but I really can't figure out how two men painted a truck in one day with a single paint brush.
Posted by Sarah Snow at Thursday, January 07, 2021