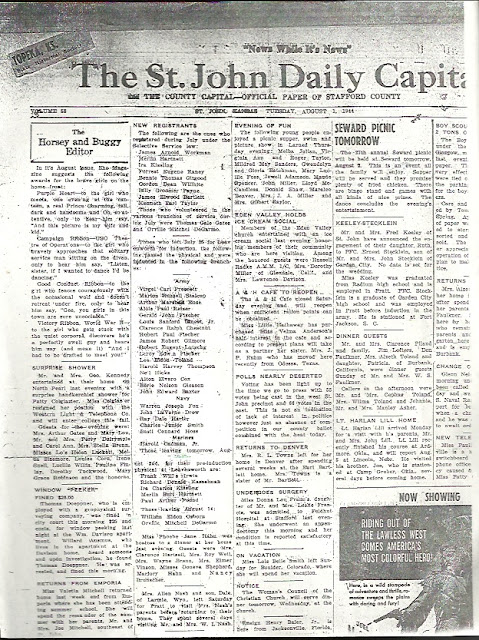 "Window 'Peeker' Fined $25.00," Article in St. John Daily Capital Newspaper, August 1, 1944
Transcription:
WINDOW "PEEKER" FINED $25.00
Thomas Doeppner, who is employed with a geophysical surveying company, was fined in city court this morning $25 and costs, for window peeking last night at the Wm Davison apartment. Willard Ausmus, who lives in the apartment at the Davison home, heard someone and upon investigation, he found Thomas Doeppner. He was arrested, and fined this morning.
When Opa said in his August 1st letter to Grandmother that something "pretty bad" had happened the night before, he wasn't exaggerating. Somehow Opa was in the wrong place at the wrong time (and had the wrong "look" and "accent" about him), and he was arrested for "window peeking." It's pure irony that the phrase for this crime is "Peeping Tom."
I did look into other sources and the letters between Opa and Grandmother, and I can honestly say I believe that Opa did not commit this crime.
I cannot imagine the embarrassment, the frustration, and the feelings of injustice that happened in that night. I assume Opa spent the night in jail and had to pay the fine the next day. For Opa, it was a big amount of money, adjusted for inflation it would be the equivalent of about $360 today. It seems a bit harsh and without evidence, especially since there was no indication of any witnesses actually seeing Opa "peeking" in. Only that they heard a noise and found Opa outside when they looked.
We actually had an incident with a window seeker one time. It was when my husband and I were first married, living in a big parsonage in Fairfax. We were downstairs in our basement, watching a movie (it was a drama- not a sexy movie) and we were both just in our regular shorts and t-shirts type of clothing. (I say this to show just how utterly boring we were to peep). We saw something moving in the window well behind the TV. We thought it was a cat, and then realized it was a man! My husband moved as fast as I've ever seen him, and my gentle, slow-to-anger spouse ran out the front door yelling at the man who had long sprinted down the street. We never figured out who it was, but he never came back!
Probably because we got a St. Bernard a month later.
I don't know the details of Opa's incident. Opa only told Grandmother when they saw each other, and this certainly was not among the stories he repeated as he got older. In fact we didn't hear much about this time at all, and in his auto-biography, he blurred the lines on this time in his life:

...when I finally came to America I went to college; and as soon as graduated, I volunteered for military service. (pg 5, From Nazi Germany to a Career in Freedom, Doeppner)... Both my wife and I graduated from Kansas State College (now Kansas State University), Marjorie in Home Economics and Child Welfare, and I in Electrical Engineering. I really wanted to get into the Army "to fight the Nazis." As an "enemy alien," however, I was not eligible to enlist. Someone suggested I could volunteer for the draft (probably thinking, if you are stupid enough). Also, Marjorie and I were engaged to be married. (pg 30).

So, not exactly how things happened. Opa was arrested on that summer night, and after that, everything changed. In fact, things happened so quickly, I genuinely believe Opa may have forgotten (blocked out) his time at St. John's altogether!

There was a calm before the storm, so he pressed on with everything, hoping it would just be a blip on the radar. It wasn't.