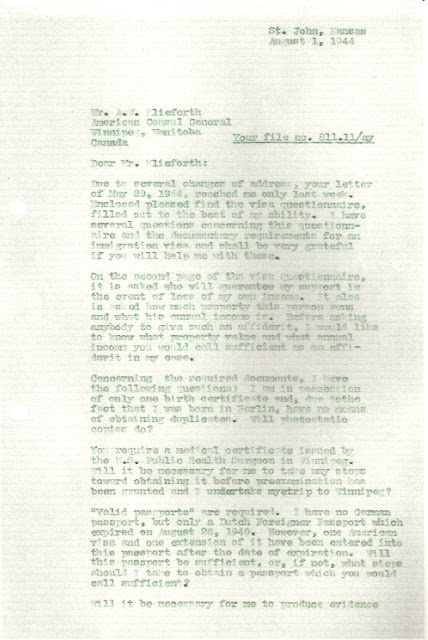 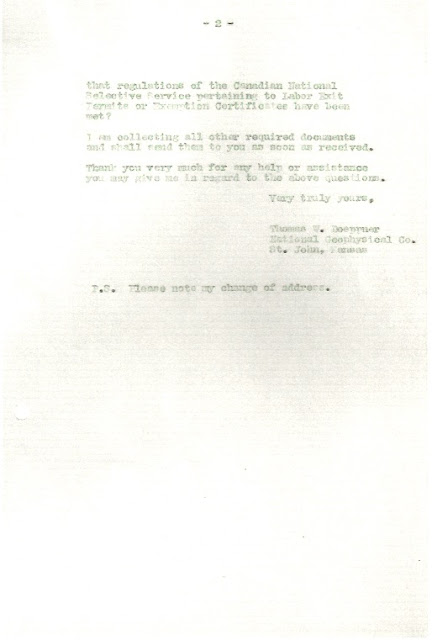 Letter from Opa to American Consul General in Canada, August 1, 1944.
Transcription:
St. John, Kansas
August 1, 1944
Mr. A.W. Elieforth
American Consul General
Winnipeg, Manitoba
Canada                  Your file no. 811.11/ay
Dear Mr. Elieforth:
Due to several changes of address, your letter of May 29, 1944, reached me only last week. Enclosed pleased find the visa questionnaire, filled out to the best of my ability. I have several, questions concerning the questionnaire and the documentary requirements for an immigration visa and shall be very grateful if you will help me with these.
On the second page of the visa questionnaire, it is asked who will guarantee my support in the event of loss of my income. It also is asked how much property this person owns and what his annual income is. Before asking anybody to give such an affidavit, I would like to know what property value and what annual income you would call sufficient as an affidavit in my case.
Concerning the required documents, I have the following questions: I am in possession of only one birth certificate and, due to the fact that I was born in Berlin, have no means of obtaining duplicates. Will photostatic copies do?
You require a medical certificate issued by the U.S. Public Health Surgeon in Winnipeg. Will it be necessary for me to take any steps toward obtaining it before preexamination has been granted and I undertake my trip to Winnipeg?
"Valid passports" are required. I have no German passport, but only a Dutch Foreigner Passport which expired on August 28, 1940. However, one America visa and one extension of it have been entered into this passport after the date of expiration. Will this passport be sufficient, or, if not, what steps should I take to obtain a passport which you would call sufficient?
Will it be necessary for me to produce evidence that regulations of the Canadian National Selective Service pertaining to LaborExit Permits or Exception Certificates have been met?
I am collecting all other required documents and shall send them to you as soon as received.
Thank you very much for any help or assistance you may give me in regard to the above questions.
Very truly yours,
Thomas W. Doeppner
National Geophysical Co.
St. John, Kansas
P.S. Please note my change of address. 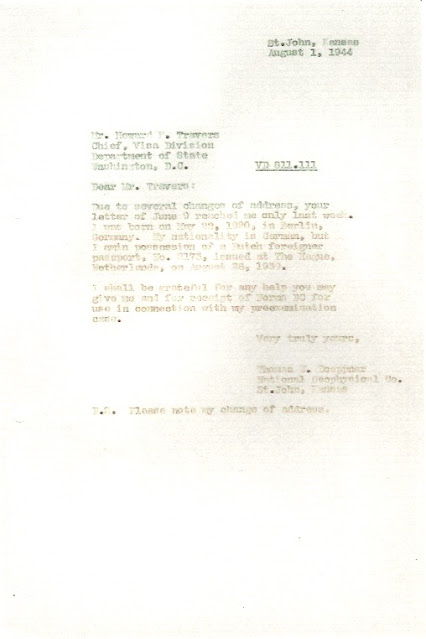 Letter from Opa to Chief of Visa Division in D.C., August 1, 1944.
Transcription:
St. John, Kansas
August 1, 1944
Mr. Howard K. Travers
Chief, Visa Division
Department of State
Washington, D.C.      VD 811.111
Dear Mr. Travers:
Due to several changes of address, your letter of June 9 reached me only last week. I was born on May 22, 1920, in Berlin, Germany. My nationality is German, but I am in possession of a Dutch foreigner passport, No. 2173, issued at The Hague, Netherlands, on August 28, 1939.
I shall be grateful for any help you may give me and for receipt of Form BC for use in connection with my preexamination case.
Very truly yours,
Thomas W. Doeppner
National Geophysical Co.
St. John, Kansas
P.S. Please note my change of address. 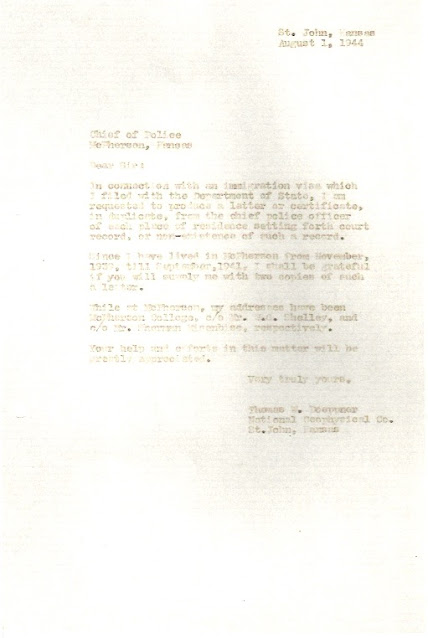 Letter from Opa to Chief of Police in McPherson, Kansas, August 1, 1944.
Transcription:
St. John, Kansas
August 1, 1944.
Chief of Police
McPherson, Kansas
Dear Sir:
In connection with an immigration visa which I file with the Department of State, I am requested to produce a letter or certificate, in duplicate, from the chief police officer of each place of residence setting forth court record, or non-existence of such a record.
Since I have lived in McPherson from November, 1939, till September 1941, I shall be grateful if you will supply me with two copies of such a letter.
While at McPherson, my addresses have been McPherson College, c/o Mr. W.C. Shelley, and c/o Mr. Sherwin Misenbise(?), respectively.
Your help and efforts in this matter will be greatly appreciated.
Very truly yours,
Thomas W. Doeppner
National Geophysical Co.
St. John, Kansas
Opa had a really rough night. I imagine he spent the whole night worrying about whether his chances for an immigration visa were shot by this horrible injustice.
He didn't know either way, and paperwork is paperwork, so the very next day he got to work writing the various government agencies with his questions and answers to their questions. I wonder if it made him feel better or worse. Did it give him a sense of moving forward, still working toward the next thing? Or did he read with despair his questions of whether they would accept an expired foreigner certificate from a country that was technically no longer in existence?
It is terrible irony that he should have a statement from the chief of Police in every place he lived. He lived in McPherson nearly three years and not one mark on his record. He's been in St. John for hardly two months and now his record is not clean.
He asked what would be a sufficient affidavit, which I think is a fair question that they likely will not answer. The Shelleys, who own a farm and live on a small, but manageable salary, were not enough for Ella's affidavit. Will they be enough for Opa? Opa has been down this road, and in my mind, I feel like he's asking the department to just tell him what they want, then he doesn't have to guess at it. What's the magic number so I don't waste my time? You know the answer: there isn't a magic number. It's how they feel that day, what the leadership told them to do that week. It's so subjective.
Opa goes to work to keep his mind off things, or to feel like he's making progress, but he has no idea if all these letters and documents and whatever will even see the light of day. He hopes that he can go forward with his plan to travel to Canada and then re-enter the US on a regular immigrant visa, his next step towards citizenship. If that fails, what else can he do? His whole future rests on his ability to stay in the US.
Posted by Sarah Snow at Tuesday, January 05, 2021