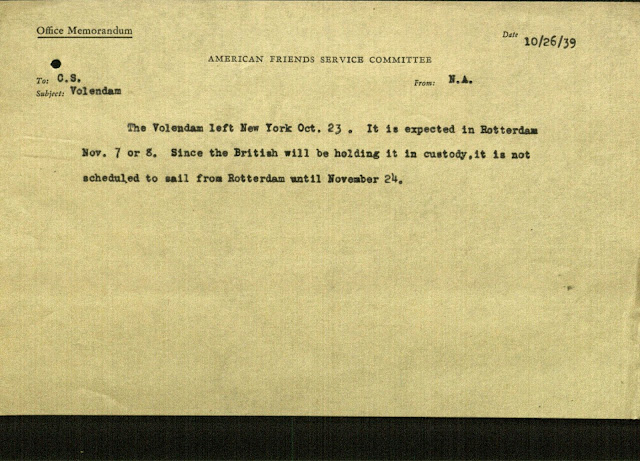 Office Memorandum          Date: 10/26/39
American Friends Service Committee
To: C.S.                   From: N.A.
Subject: Volendam
The Volendam left New York Oct. 23. It is expected in Rotterdam Nov. 7 or 8. Since the British will be holding it in custody, it is not scheduled to sail from Rotterdam until November 24.
News is finally coming in, the memorandum within the American Friends Service Committee (AFSC) tells the news most succinctly: the Volendam is delayed, and won’t leave Rotterdam until November 24. Now what? Is Opa just going to wait for it? 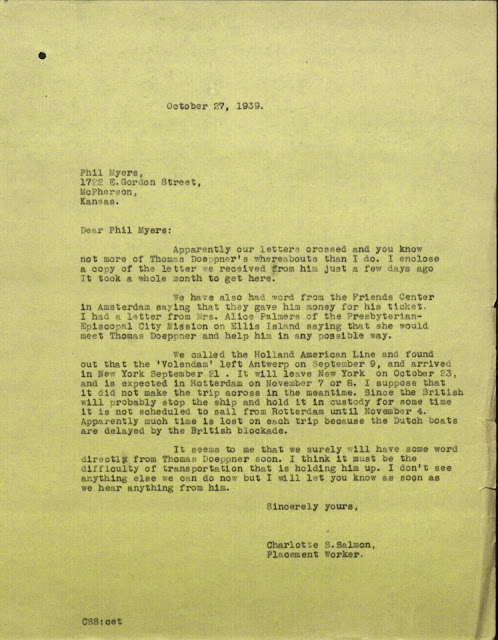 Apparently our letters crossed and you know not more of Thomas Doeppner's whereabouts than I do. I enclose a copy of the letter we received from him just a few days ago. It took a whole month to get here.

We have also had word from the Friends Center in Amsterdam saying that they gave him money for his ticket. I had a letter from Mrs. Alice Palmers of the Presbyteran-Episcopal City Mission on Ellis Island saying that she would Thomas Doeppner and help him in any possible way.

We called the Holland American Line and found out the the 'Volendam' left Antwerp on September 9, arrived in New York September 21. It will leave New York on October 23, and is expected in Rotterdam on November 7 or 8. I suppose that it did not make the trip across in the meantime. Since the British will probably stop the ship and hold it in custody for some time it is not schedule to sail from Rotterdam until November 4. Apparently much time is lost on each trip because the Dutch boats are delayed by the British blockade.

It seems to me that we surely will have some word directly from Thomas Doeppner soon. I think it must be the difficulty of transportation that is holding him up. I don't see anything else we can do now but I will let you know as soon as we hear anything from him.

Sincerely yours,
Charlotte S. Salmon,
Placement Worker.
Charlotte wrote Phil Myers once she learns of the update- acknowledging that their questioning letters must have passed each other. She mentions that a letter from Opa had just arrived after a month in transit.


Charlotte does have an update on Opa- that everything is prepared and ready to go except for his ship. I love that the AFSC followed through and called the Holland American Line to find out where the ship was. It’s a small thing, but sometimes these details of follow through are lacking- so it’s nice to see just how diligent they are in gathering information.


I’m still not exactly sure what it is that the British blockade does with Dutch ships, but it is slowing down travel, and Opa needs to get to the USA. His scholarship is technically only for this year and if he can’t get on a boat before the semester ends, he may have to give up his scholarship. 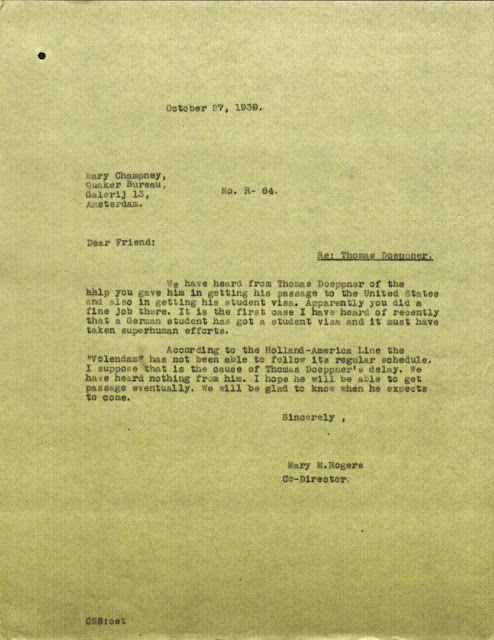 We have heard from Thomas Doeppner of the help you gave him in getting his passage to the United States and also in getting his student visa. Apparently you did a fine job there. It is the first case I have heard of recently that a German student has got a student visa and it must have taken superhuman efforts.

According to the Holland-America Line the "Volendam" has not been able to follow its regular schedule. I suppose that it is the cause of Thomas Doeppner's delay. We have heard nothing from him. I hope he will be able to get passage eventually. We will be glad to know when he expects to come.

The folks in Amsterdam also wrote to Charlotte letting her know of the delay of the Volendam. No one has heard anything from Opa yet, so they don’t know what his course of action is yet.


However, everyone is willing to wait and are still hopeful. There is an interesting part in the letter from Amsterdam when Mary Rogers writes: “It is the first case I have heard of recently that a German student has got a student visa and it must have taken superhuman efforts.” Opa was genuinely a rare case- he was one of the very very lucky ones.

In April of 2013, Ron Coleman at the Holocaust Museum did a presentation on some of the case files from the American Friends Service Committee - many which did not end well. Opa really was a rare, lucky case. A German (half) Jew that left Europe after Kristallnacht- rare.
Posted by Sarah Snow at Saturday, May 16, 2015