March-May 1939: Fundraising for a Refugee

These news articles from the Spectator (the McPherson College newspaper) spanning March-May of 1939- speak for themselves. I share them now that it is no longer a mystery that Opa is en route to McPherson College. It is fascinating to see the process of how a small college in Kansas can independently offer freedom to a refugee. It makes me believe in things. It makes me believe in the ability that we have to do good in the world- even for someone across the world. There are two sons, three granddaughters, and five great-grandchildren that exist because Paul Myer and his friends decided to do the work it takes to help someone else.

Transcription:
May Bring Refugee Non-Aryan Student
Groups Cooperate in Trying to Support Student Here
Vera Heckman, co-president of the S.C.M., has revealed that the student movement is planning to make it possible for a non-Aryan christian student refugee to come to Macampus and attend college next year.

Officials believe that if the two organizations work together, enough money can be raised for the support of a student refugee from Germany.

The Intercollegiate Committee to Aid Student Refugees has written officials here saying that refugee students capable of paying their transportation to the school.  It will take about $400 to support a student for a year.

Through the cooperation of the student council and the S.C.M., together with the aid of the I.C.A.S.R. and the Friends Service Committee,  it is hoped that such an expression of good will to the non-Aryans may be made possible on this campus.

Transcription:
Pictured above are committee chairmen who will be active on campus next week in their efforts to bring a non-Aryan student to the campus. Heading the central committee is Luther Harshbarger. Vera Heckman, co-chairman of the S.C.M. will be active in club solicitation. Bill Thompson heads the committee contacting off-the-campus organizations, while Phil Myers will govern student-faculty solicitation.

(article found on far right of this picture, and is shown below in sections) 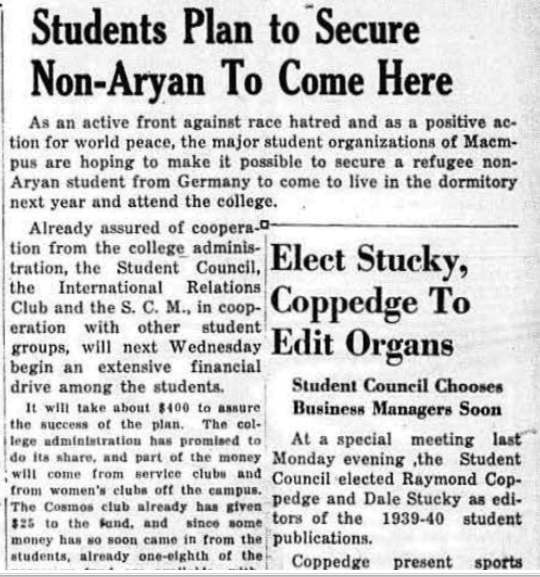 Transcription:
Students Plan to Secure Non-Aryan to Come Here
As an active front against race hatred and as a positive action for world peace, the major student organizations of Macampus are hoping to make it possible to secure a refugee non-Aryan student from Germany to come live in the dormitory next year and attend the college.
Already assured of cooperation from the college administration, the Student Council, the International Relations Club, and the S.C.M., in cooperation with other student groups, will next Wednesday begin an extensive financial drive among the students.

It will take $400 to assure the success of the plan. The college administration has promised to do its share, and part of the money will come from service clubs and from women's clubs off the campus. The cosmos club already has given $25 to the fund, and since some money has so soon came in from the students, already one-eighth of the necessary fund are available, without counting the promises of the college officials.

This shows that the plan is practical and can be carried out successfully, assuring students the privilege of having as their constant companion a student who is aware of the European situation and Hitler's purge.

The student will be secured through the American Friends Service Committee and the Intercollegiate Committee to Aid Student Refugees. A Christian student can be secured and the local students may choose from a large list the student they desire. Sex, age, and even looks may enter into the choice.
(I snickered at the looks comment)

Initiating the student campaign, which is hoped to reap at least $200, will be a chapel program with Dr. Burton Metzler as chairman and speaker. He will explain the plans and the desireability of aiding a refugee.

The solicitation will begin Wednesday and, aided by "I have contributed" signs, will end Friday noon. Three days, April 26, 27, 28, will constitute the duration of the drive.

Since most Macampusans work their way through college, student leaders here think it only fair that any student who is aided here should be willing to work also.

All the major student clubs and organizations are represented on the central planning committee headed by Luther Harshburger. 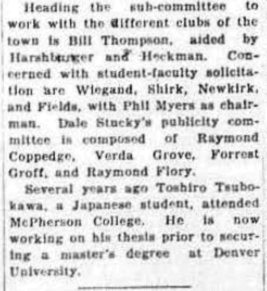 Heading the subcommittee to work with the different clubs of the town is Bill Thompson, aided by Harshbarger and Heckman. Concerned with student-faculty solicitation are Wiegland, Shirk, Newkirk, and Fields, with Phil Myers as chairman. Dale Stucky's publicity committee is composed of Raymond Coppedge, Verda Grove, Forrest Groff, and Raymond Flory.

Several years ago Toshiro Tsubokawa, a Japanese student, attended McPherson College. He is now working on his thesis prior to securing a master's degree at Denver University.

At the half-way mark in the drive for funds among faculty and students to secure a non-Aryan refugee for Macampus next year. It was found yesterday that more than fifty dollars had already been raised for the purpose.

Chairman Phil Myers of the solicitation committee reports that many students have indicated their intentions to contribute to the cause, but that they did not have the money yesterday. The momentum gained by the drive will have brought increased activity by this morning.

Although the active campaign ends today at noon, the committee will continue to accept contributions for several days. The quota set for students has been $200.

Committee heads of the movement are all of the opinion that the drive will be sufficiently successful to insure the success of the plan. Off-campus organizations are already aiding, and the college administration has promised its share of the necessary $400.

Inaugurated last Wednesday morning, the campaign has yet to gain its top momentum, and solicitation since yesterday noon will probably show an increase even over previous solicitations.

The campus was yellow yesterday with "I have contributed" cards dangling from lapels, and today the signs may even rival the ever-present campus dandelions.

(We searched for a picture of these cards on lapels, to no avail. How amazing would it have been for Opa to see that?!)

Good will is the cement that holds our house of civilization together, and it is pretty badly cracked. This was suggested by Dr. Metzler in chapel Wednesday. "Some of our fellow students have gotten caught in the shortage of good will and are in an unfortunate predicament. How can we help?"

Luther Harshbarger spoke of the reason for the attempt to bring a non-Aryan student to the camps next year, beginning next fall. There are three phases of the financial drive: a faculty- student campaign, in which each are asked to contribute at least one dollar; a downtown drive; and an honor scholarship and work for the student who will be chosen.

Phil Myers outlined the plan of which the funds will be solicited. 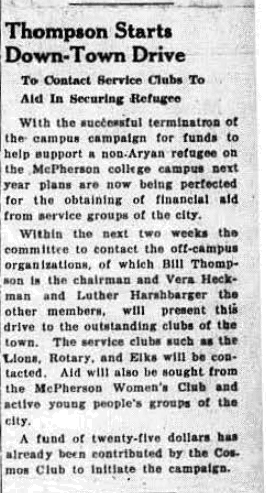 With the successful termination of the campus campaign for funds to help support a non-Aryan refugee on the McPherson college campus next year plans are now being perfected for the obtaining of financial aid from service groups of the city.

Within the next two weeks the committee to contact the off-campus organizations, of which Bill Thompson is the chairman and Vera Heckman and Luther Harshbarger the other members, will present this drive to the outstanding clubs of the town. The service clubs such as the Lions, Rotary, and Elks will be contacted. Aid will also be sought from the McPherson Women's Club and active young people's groups of the city.

A fund of twenty-five dollars has already been contributed by the Cosmos Club to initiate the campaign.

Haven for a refugee non-Aryan student next year will be Macampus, according to the opinions of leaders of the drive for funds to make the plan possible.

Phil Myers, chairman of student-faculty solicitations, has reported that $120 have already been raised in cash on the campus, inspite of a dire spring slump in student finances.

It is hoped that his amount can be raised to $150 within the next few days. Several students who have not paid cash to the solicitors have indicated their intentions to contribute to the campaign. Myers urges that any student who has not supported the drive and wishes to do so act immediately.

As the student drive is being completed, the drive among service clubs in the community is gaining momentum. Luther Harshbarger, general chairman of the movement, says that he believes the success of the plan is assured. 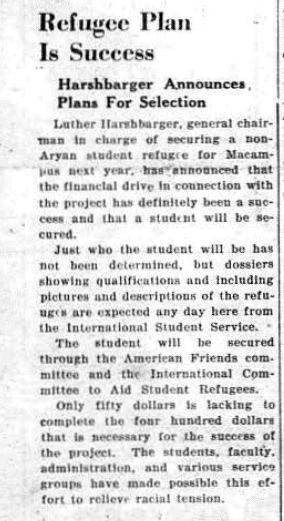 Luther Harshbarger, general chairman in charge of securing a non-Aryan student refugee for Macampus next year, has announced that the financial drive in connection with the project has definitely been a success and that a student will be secured.

Just who the student will be has not been determined, but dossiers showing qualifications and including pictures and descriptions of the refugees are expected any day here from the International Student Services.

The student will be secured through the American Friends committee and the International Committee to Aid Student Refugees.

Only fifty dollars is lacking to complete the four hundred dollars that is necessary for the success of the project. The students, faculty, administration, and various service groups have made possible this effort to relieve racial tension.
Posted by Sarah Snow at Tuesday, May 26, 2015