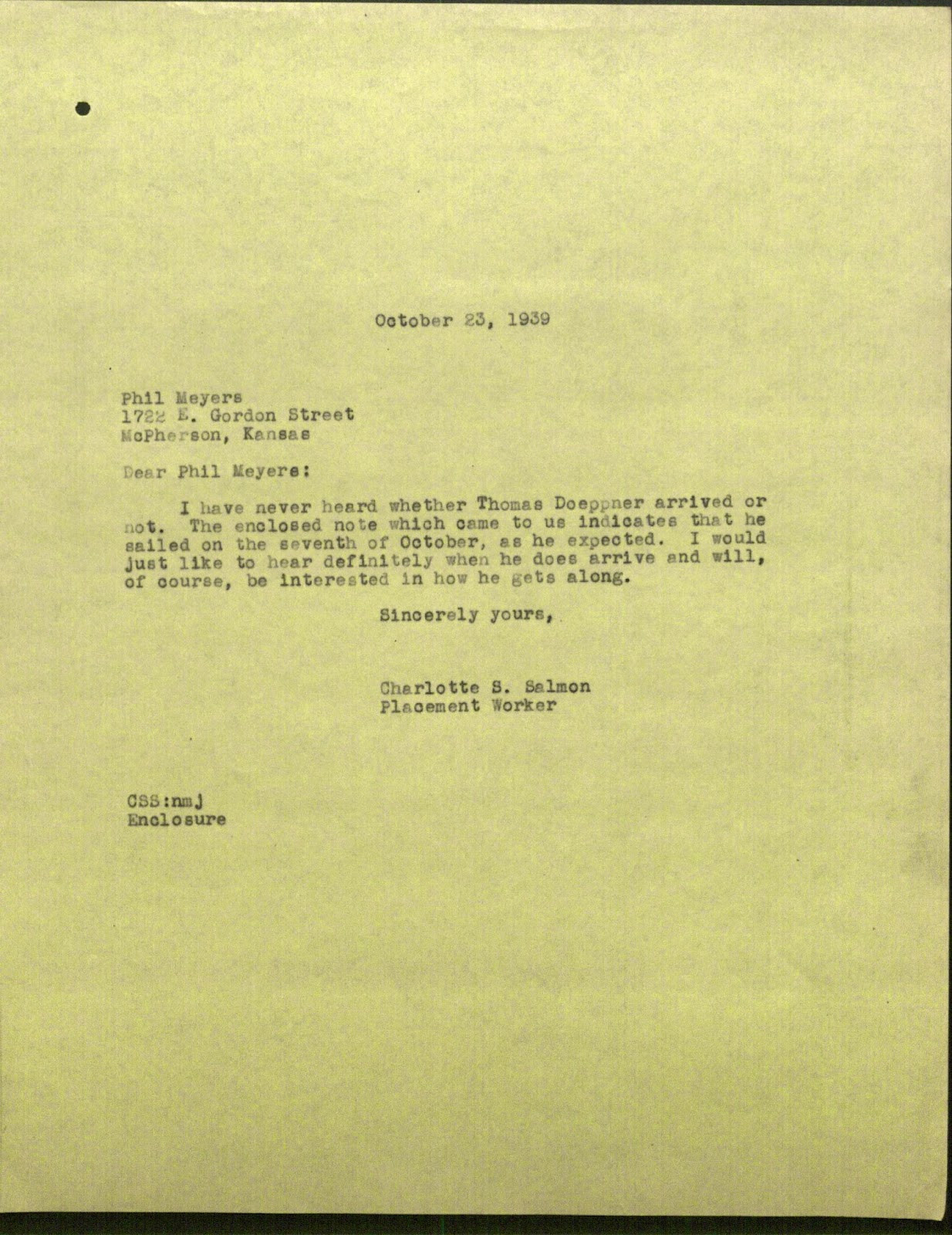 I have never heard whether Thomas Doeppner arrived or not. The enclosed note which came to us indicates that he sailed on the seventh of October, as he expected. I would just like to hear definitely when he does arrive and will, of course, be interested in how he gets along. 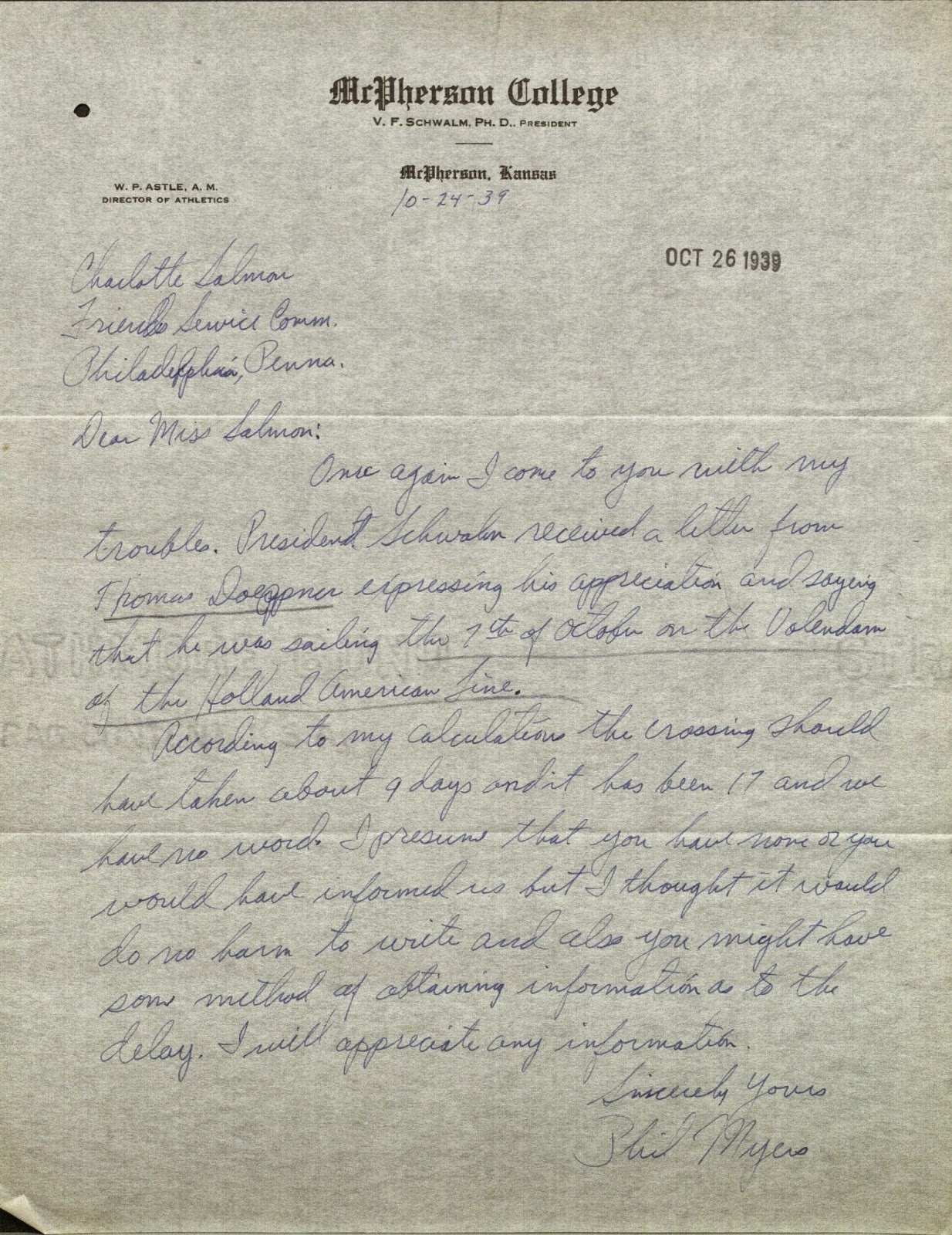 Once again I come to you with troubles. President Schwalm received a letter for Thomas Doeppner expressing his appreciation and saying that he was sailing this 7th of October on the Volendam of the Holland American Line.
According to my calculations the crossing should have taken about 9 days and it has been 17 and we have no word. I presume that you have more or you would have informed us but I thought it would do no harm to write and also you might have some method of obtaining information as to the delay. I will appreciate any information. 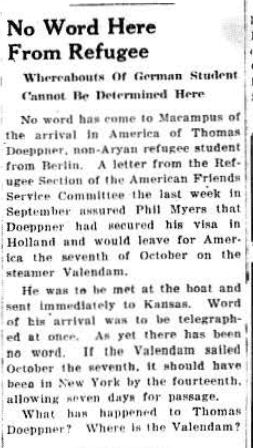 No Word Here From Refugee

No word has come to Macampus of the arrival in America of Thomas Doeppner, non-Aryan refugee student from Berlin. A letter from the Refugee Section of the American Friends Service Committee the last week in September assured Phil Myers that Doeppner had secured his visa in Holland and would leave for America the seventh of October on the steamer Volendam.

He was to be met at the boat and sent immediately to Kansas. Word of his arrival was to be telegraphed at once. As yet there has been no word. If the Valendam sailed October the seventh, it should have been in New York by the fourteenth, allowing seven days for passage.

What has happened to Thomas Doeppner? Where is the Volendam?

If you've ever seen the movie "That Thing You Do" about a one-hit-wonder band with Tom Hanks, you may remember the scene when one of the band members is shown galavanting around California and riding roller coasters at Disneyland with his new friends from the Army. Tom Hanks' character yells into a telephone at the television studio (where everyone is supposed to meet), unknowing of the man's adventures: "WHERE THE HELL IS HE?!"

This is what I imagined when I read the letters. I don't imagine Phil was a swearing man, but I kinda feel like Charlotte let "hell" slip every now and then. Where is Tom?! She and Phil write to each other with the same question, wondering why they haven't heard from him.

We know of his delay because we get to read his letters to Gisela. If Opa wrote to the folks in the US of his delay, he may still make it before the letter does, mail overseas is so slow. The delay is obvious, it's now at least a week or two after his estimated arrival, and there's been no word.

The McPherson College paper, the Spectator, is once again fabulous in reporting the news. The only error is their spelling of the Volendam. However, they let everyone know that as of right now, there's no word on the refugee student, and no news of the Volendam.

I wonder what the students thought. I feel like I would be thinking worse case scenarios, afraid that the Volendam was lost at sea.

Now everyone is on the outlook, waiting and watching.
Posted by Sarah Snow at Thursday, May 14, 2015