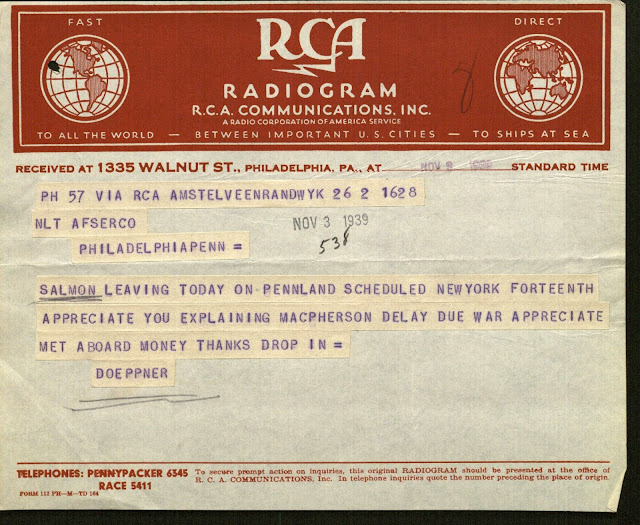 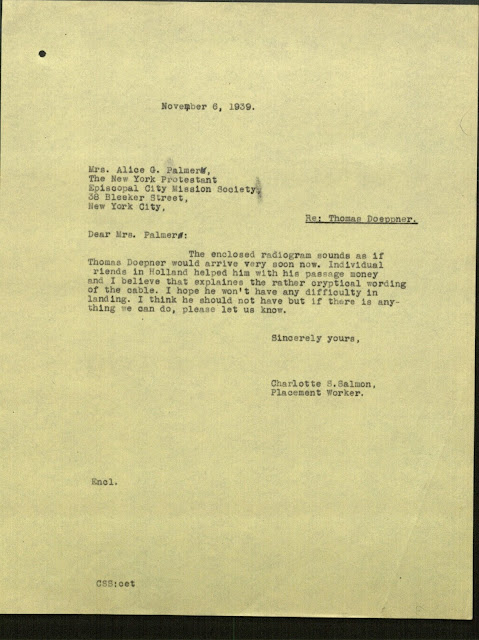 The enclosed radiogram sounds as if Thomas Doeppner would arrive very soon now. Individual Friends in Holland helped him with his passage money and I believe that explains the rather cryptical wording of the cable. I hope he won't have any difficulty in landing. I think he should not have but if there is anything we can do, please let us know. 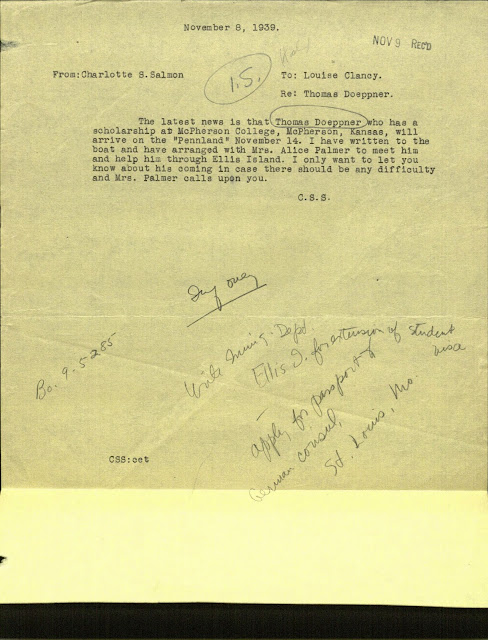 The latest news is that Thomas Doeppner who has a scholarship at McPherson College, McPherson, Kansas, will arrive on the "Pennland" November 14. I have written to the boat and have arranged with Mrs. Alice Palmer to meet him and help him through Ellis Island. I only want to let you know about his coming in case there should be any difficulty and Mrs. Palmer calls upon you.

At last he is on his way! These telegrams and letters just tell us the hurried message that Opa is finally on his way, on the Pennland. I have one more resource: Opa’s autobiography. He gives us the background scoop on how he was able to hop on the Pennland. In case you think it’s like changing from one flight to another- his words remind me how precious that ticket on a boat out of Europe was at that time:

my ship...was diverted… and all other ships scheduled to leave from Holland were sold out. The next ship to leave for the States was the SS Pennland, departure date late in October. It was also sold out. In desperation, I asked the shipping line if I could have a copy of the passenger list on that ship. They gave it to me, along with local telephone numbers. I spent a long time calling American passengers on that list offering to trade tickets with them. My English was very poor in those days (two years in high school), and I don’t know how many calls I made, but finally I found one American - I think he was a businessman - who wanted to stay in Europe a little longer, and agreed to trade with me. We exchanged tickets, and I finally left for America… (From Nazi Germany to a Career in Freedom, p.9)

Thank you American businessman. God bless you Opa for having such determinism. Thank you shipping line person who was crazy enough to give out the passenger list and phone numbers to a nineteen year old German half-Jew. And thank you Charlotte for paving the way for Opa in America.

Opa left home in search of a future in freedom. He titled his autobiography: "From Nazi Germany to a Career in Freedom" - freedom was very important to him. I imagine he had mixed emotions as he sailed toward freedom, but left home behind.
Posted by Sarah Snow at Thursday, May 21, 2015