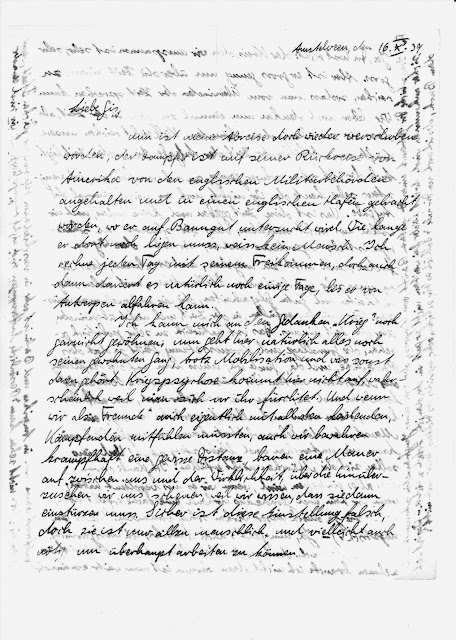 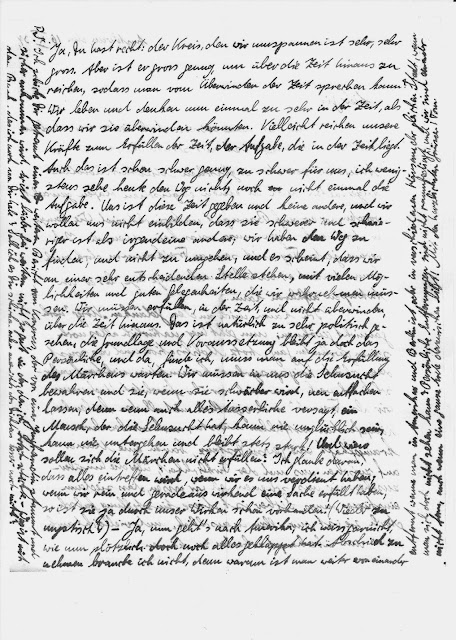 
Dear Gis,      Amstelveen Oct. 16th, 1939
Now my departure date has been postponed again. The steamboat has been stopped by the English military authorities on its way back from America. It was brought into an English harbor, where its built will be examined. Nobody knows how long it will have to stay there. I count every day that it will be released, but even then will it be a few days before it can leave from Antwerp.

Opa is delayed. He is so close, and yet he is still at risk to miss the boat completely. His frustration is showing. He knows that time is everything right now. Kristallnacht was almost a year ago as of this writing, war was declared by Britain in 1939, and now everyone is either getting out of dodge or standing by the cannon with a lit match. Opa is not the only one itching to leave.  He knows that time is not on his side.

Here is an excerpt from his autobiography that details this moment from his memory:

I finally got passage on a ship that was supposed to leave early October (that is October 1939; I had left Germany in July 1938; World War II had started in September 1939, while I was in Holland). But because of a storm in the British Channel, my ship, returning from New York, was diverted to Italy, and all other ships scheduled to leave from Holland were sold out.

I’m not sure if Opa’s memory is absolutely correct, but I suppose it could be combined with what this letter says. Perhaps the ship was diverted by the British officials who needed to assess any damage? Either way, the ship did not come.

I cannot get used to the thought of 'war', everything still goes along as usual here, regardless of all the mobilization and everything else that connects with it. War psychosis doesn't happen here, probably because of fear of it. Even though we would have to feel 'as friends' with all those wrongly fighting. But we also keep a certain distance in a convulsive sort of way. We build a wall between ourselves and reality, which we don't dare to look over, because we know that it would have to crash down. Surely this is a wrong attitude, but it is only human, and maybe even necessary in order to work at all.

I love Opa’s open-eyed account of how we are able to ignore war even when it is at our doorstep. It’s a method of self-preservation to keep war at bay so that we can continue doing the work of everyday life. How strange it must have been to be where Opa was, waiting for his exit strategy to arrive and watching people function as if nothing had changed. I just watched some film footage of Berlin in July 1945, with people milling around, biking and walking up and down the streets that used to be pristine and cloaked in the shadows of large buildings. Instead, these folks were promenading down dusty streets, flanked by brick and concrete shells, buildings that if not gutted were pitted by machine gun-fire. There were no idle eyes or gawking neighbors. Every person was moving, acting, participating in the work to make daily routine normal again. It was astonishing to watch this. I imagine Opa sitting outside his father’s two-story bungalow in Amstelveen, October 1939, looking at the leaves falling, watching kids play, business conducted, and newspapers deliver cataclysmic news to smiling recipients.

Yes you are right: The circle which we have to reach round is very, very big. But it is big enough to reach beyond time, so that we are able to speak of overcoming the time. We live and speak all too much in the time as that we could overcome it. Maybe our strengths last to fulfill the time, the task that lies within the time. Even that is very difficult for us. I at least don't see the path today, not even the task. And this is the time given, we don't want to imagine that it will be more difficult, is more difficult than any other. We are to find the way, and not to go around it, and it seems to me that we stand at a very decisive juncture, with lots of possibilities and good opportunities, which we have to perceive. We have to fulfill within the time and not overcome past the time. Of course that is truly seen too politically, the basis and requirements are still personal and there we have to wait for the fulfillment of the fairy tale. We have to reserve within ourselves the longing, and if it becomes weak, kindle it anew. Because even if all exterior fails, a human being who has the longing can never be unhappy, can never drown and always stays strong! And why shouldn't fairy tales come to pass? I believe everything will come to pass, when we have earned it, and have fulfilled a task efficiently. Through our work it is already available. Yes, and now it goes to America. I don't know how suddenly everything worked out in the end. I don't have to bid farewell, one is not further apart when one lives in America or Berlin, or lives in different houses in the same city when one doesn't see the other anyways. Personal distances are not caused by spaces. And we are not apart, should the whole earth separate us!
With hearty greetings. Tom

P.S: I am sending you another report of the congress that comes from a friend. I am sure you will receive it alright. It is by far not as good as the one I sent the last time. What shall happen with the book that I still have from you? Should I send it to you?

This last part has me wishing I could read German. I feel like there are nuances I’m missing. I don’t want to read too much into this, but isn’t this kind of like a “love will find a way” type note? He’s leaving for America, they will soon be separated even further, and for an indefinite amount of time. It’s almost as if it has hit the both of them that this really is a goodbye, that there is no telling what will happen, or even if they will be in touch at all. Opa speaks of accomplishing a task in the time given. I think he’s sort of naming the fact that they each have their own separate paths. Each have their own destiny of sorts, and that there is an undetermined time frame in which they have to do it (the war). I think there was this pact being made here that no matter what- they would remember each other. They would remember this friendship, this time, and that memory would be sustaining.
Posted by Sarah Snow at Saturday, May 09, 2015