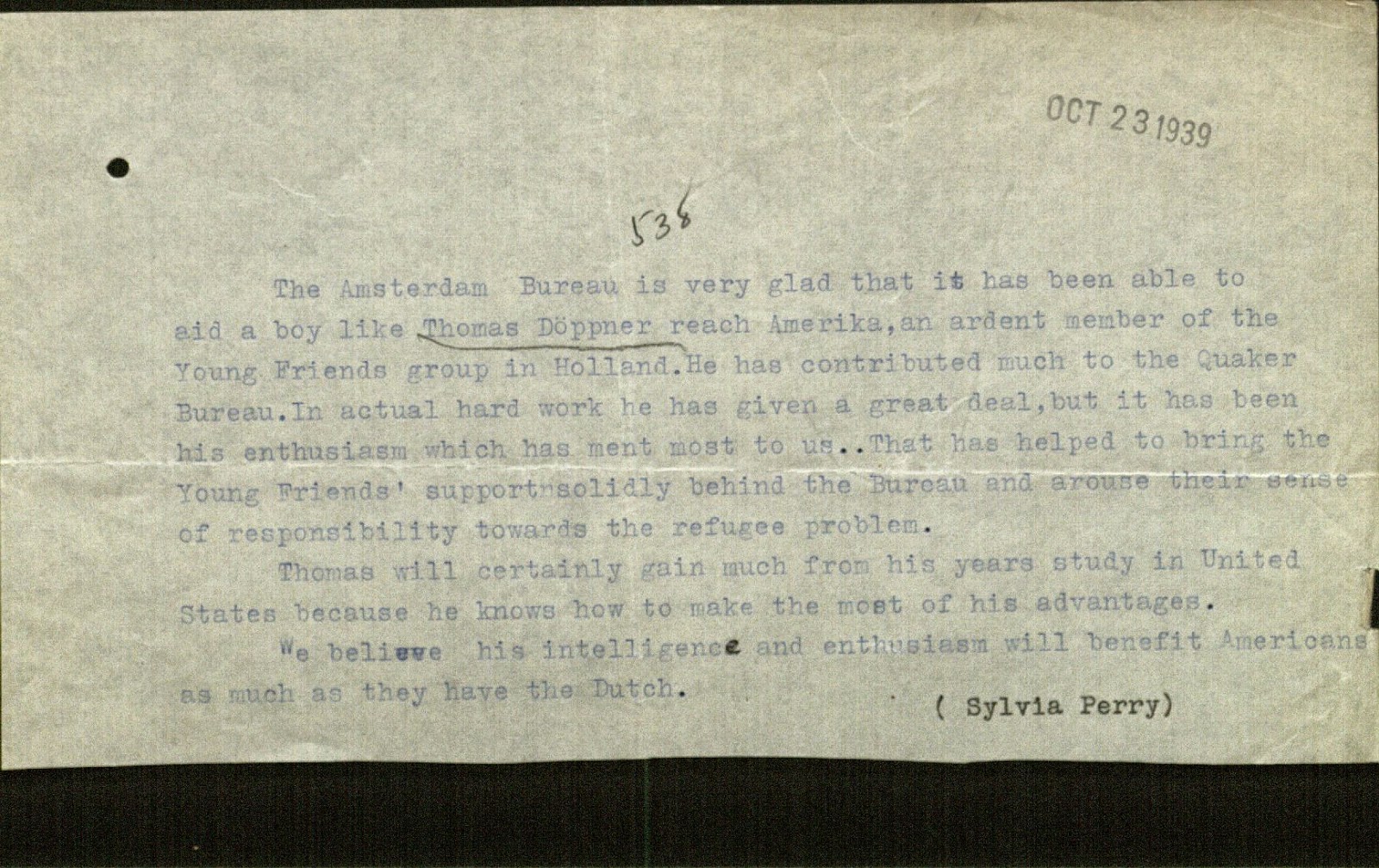 The Amsterdam Bureau is very glad that it has been able to aid a boy like Thomas Doppner reach Amerika, an ardent member of the Young Friends Group in Holland. He has contributed much to the Quaker Bureau. In actual hard work, he has given a great deal, but it has been his enthusiasm which has ment most to us. That has helped to bring the Young Friends' support solidly behind the Bureau and arouse their sense of responsibility towards the refugee problem.
Thomas will certainly gain much from his year's study in United States because he knows how to make the most of his advantages.
We believe his intelligence and enthusiasm will benefit Americans as much as they have the Dutch.


I feel like I’m reading the comments box on my child’s report card. I’m so proud of Opa. I’m proud to be his granddaughter, I’m proud to have his life as model for my own. He planted himself in Amsterdam, and instead of twiddling his thumbs and waiting for fate- he knocked on every door. He engaged himself in the Quaker group in Amsterdam, becoming a full and enthusiastic participant. As a child of a military parent, I was taught to “bloom where I’m planted” in such a way that also allowed for repotting several times. It took me a long time to learn how to plant myself the way Opa has- engaging in my community as wholly as I can no matter how long I’m promised to be there. I think I likely missed some opportunities and friendships by holding myself back and waiting to be repotted somewhere else.

The most important thing I have learned in this research project is this: we have the ability to effect change by the decisions we make and the actions we take. Our lives are all interconnected in ways even we cannot fathom. A life well-lived is one that stretches out to touch that web wherever we are, and endeavors to strengthen it. Opa has strengthened the web in Berlin, in Holland, and now he is on his way to America.

I wish his mother could have seen these letters. It’s too bad the American schools and the American Friends Service Committee were the only ones on the receiving end of all these accolades. I imagine Ella would have beamed with pride seeing these letters, and the difficulty of her separation from her son lessened a bit. It’s been months since she has been able to see him or communicate directly with him, for fear of what the Nazi censors would do to her when they found out her son had dodged the draft and left the country illegally.
Posted by Sarah Snow at Tuesday, May 12, 2015