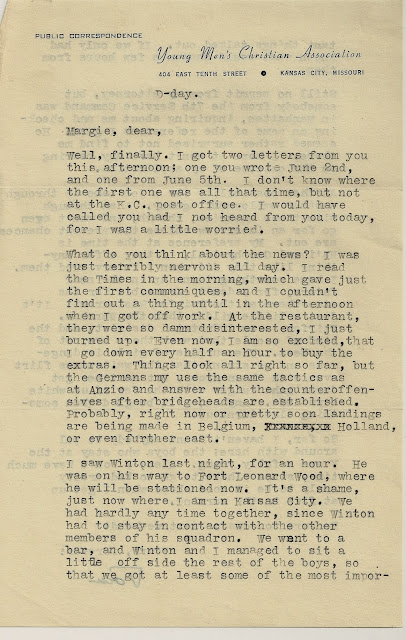 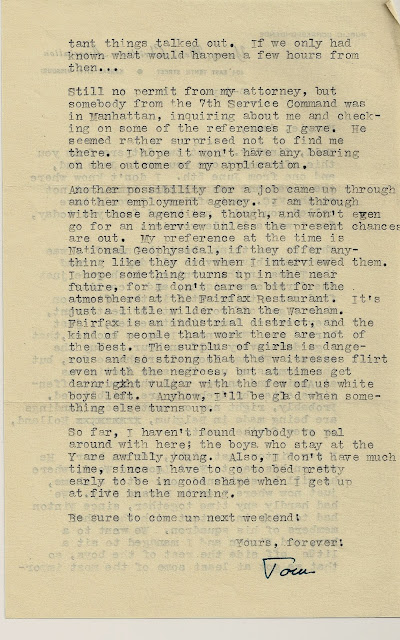 Well, finally. I got two letters from you this afternoon; one you wrote June 2nd, and one from June 5th. I don't know where the first one was all that time, but not at the K.C. post office. I would have called you had I not heard from you today, for I was a little worried.

What do you think about the news? I was just terrible nervous all day. I read the Times in the morning, which gave just the first communiques, and I couldn't find out a thing until in the afternoon when I got off work. At the restaurant, they were so damn disinterested, I just burned up. Even now, I am so excited, that I go down every half an hour to buy the extras. Things look all right so far, but the Germans may use the same tactics as at Anzio and answer with the counteroffensives after bridgeheads are established. Probably, right now or pretty soon landings are being made in Belgium, Holland, or even further east.

I saw Winton last night, for an hour. He was on his way to Fort Leonard Wood, where he will be stationed now. It's a shame, just now where I am in Kansas City. We had hardly any time together, since Winton had to stay in contact with the other members of his squadron. We went to a bar, and Winton and I managed to sit a little off side the rest of the boys, so that we got at least some of the most important things talked out. If we only had known what would happen a few hours from then...

Still no permit from my attorney, but somebody from the 7th Service Command was in Manhattan, inquiring about me and checking on some of the references I gave. He seemed rather surprised not to find me there. I hope it won't have any bearing on the outcome of may application.

Another possibility for a job came up through another employment agency. I am through with those agencies, though, and won't even go for an interview unless the present chances are out. My preference at the time is National Geophysical, if they offer anything like they did when I interviewed them. I hope something turns up in the near future, for I don't care a bit for the atmosphere at the Fairfax Restaurant. It's just a little wilder than the Wareham. Fairfax is an industrial district, and the kind of people that work there are not of the best. The surplus of girls is dangerous and so strong that the waitresses flirt even with the negroes, but at times get downright vulgar with the few of us white boys left. Anyhow, I'll be glad when something else turns up.

So far, I haven't found anybody to pal around with here; the boys who stay at the Y are awfully young. Also, I don't have much time, since I have to go to bed pretty early to be in good shape when I get up at five in the morning.

Be sure to come up next weekend!

Something I have learned (to my surprise, though I shouldn't have been), is that even if a person has been the victim of racism, misjudgment, and persecution, it does not mean that they will automatically be immune to being racist, judgmental, or persecutor.

Opa is a German, Jewish refugee and he still considers himself to be higher in the social hierarchy than Black people.  It's pretty damning.

Opa had never seen a Black person until he came to the United States. He wrote about it in his autobiography, and how foreign the racial situation of the United States were to him. Opa was not blatantly racist, in the sense that he did not advocate for harm or disenfranchisement of the Black community. However, when plopped down into the middle of the US, he easily adopted the hierarchy that had him higher.

In case anyone wants to say that he didn't know any better, trust me, I would love to be able to let him off the hook. But I can't. In his Quaker youth group, he studied about the racism problems in South Africa. He had been a victim (and seen the real manifestation in his country) of racism against Jews. He had the tools and information to know better. It just didn't benefit him to know better. This is how it works even today, white people like myself aren't "blatantly" racist, but there are spaces when we fail to combat racism because it doesn't benefit us to do so. We have to do better.

The irony in this letter is a bit on the nose, but I won't let it lose the point. At the same moment when Opa makes an off-hand comment about waitresses "even flirting" with the Black patrons of the restaurant, he is also complaining that no one seems to care that there is a literal fight for the future of the world happening on the shores of Western Europe.

His frustration is valid! The oblivious Americans who are so uninformed as to be apathetic, they need a gut-check too. Perhaps if they had cared more about world events there would have been a viable diplomatic response after the First World War. Perhaps not.

But what Opa is lamenting is this: apathy. Particularly apathy towards things that affect people in such vast and severe ways. Opa has shown his own blind eye to the plight of the Black community in America. He reveals the American blind spots of world events. We Americans are still culturally very bad at caring about things that happen far away from us. (And unfortunately, sometimes very far isn't far at all.) We have an apathy problem. I don't think we're the only ones with this problem, but we're pretty knee-deep in it.

D-Day was a turning point in the war, a time when perhaps more of America was paying attention and hoping that the end of the war would be soon. D-Day was the beginning of liberation for Western Europe. For Opa, D-Day was the first possibility in a long time of his Dad to be out from under Nazi rule. It was the first real indicator of whether the Allied forces could truly defeat the Nazis (and other Axis powers). He was paying attention.