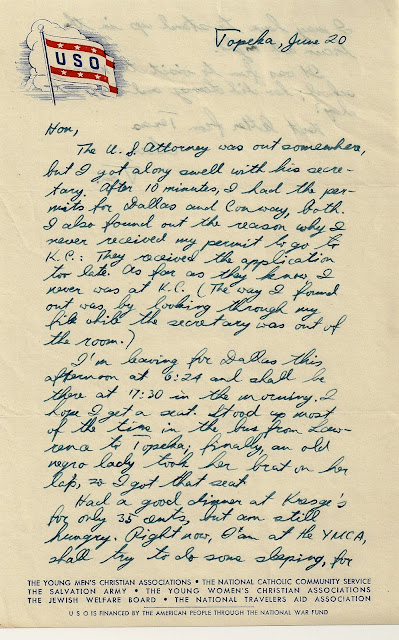 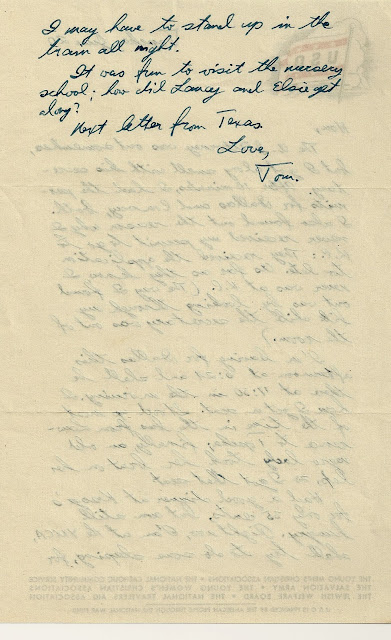 The U.S. Attorney was out somewhere, but I got along swell with his secretary. After 10 minutes, I had the permits for Dallas and Conway, both. I also found out the reason why I never received my permit to go to K.C.: They received the application too late. As far as they know, I never was at K.C. (The way I found out was by looking through my file while the secretary was out of the room.)

I'm leaving for Dallas this afternoon at 6:24 and shall be there at 11:30 in the morning. I hope I get a seat. Stood up most of the time in the bus from Lawrence to Topeka; finally, an old negro lady took her brat on her lap, so I got that seat.

Had a good dinner at Kresge's for only 35 cents, but am still hungry. Right now, I am at the YMCA, shall try to do some sleeping, for I may have stand up in the train all night.

It was fun to visit the nursery school; how did Lancy and Elsie get along?

Next letter from Texas.

I'm not entirely sure why Opa is going to Texas. Is it about a job? Maybe, I wasn't paying close enough attention. Either way I learned something new: Opa had to get permits for every place he traveled. I did not know that! I wonder if that was standard for all immigrants or just "enemy-alien" immigrants.

Opa complains about standing up on the train (I can't imagine buying a ticket for standing room only for such a long ride). I was annoyed with his comment about the woman, but I will say as a caveat for him that he regularly (in his letters) called other children "brats," so that was a blanket term he used for all children.

I did laugh as I imagined his meeting with the secretary of the US Attorney. There's Opa being charming and cracking jokes, and also looking at his file while she's out of the room. Cheeky.