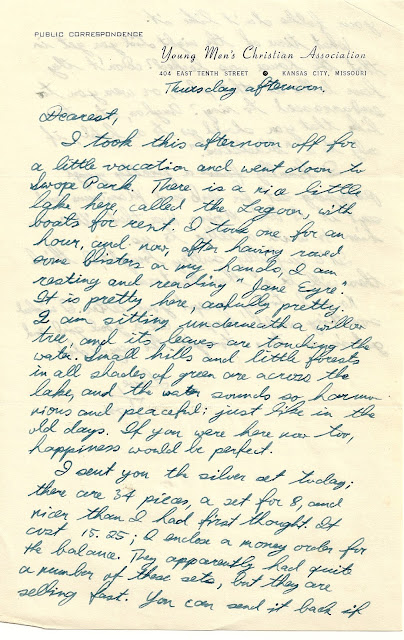 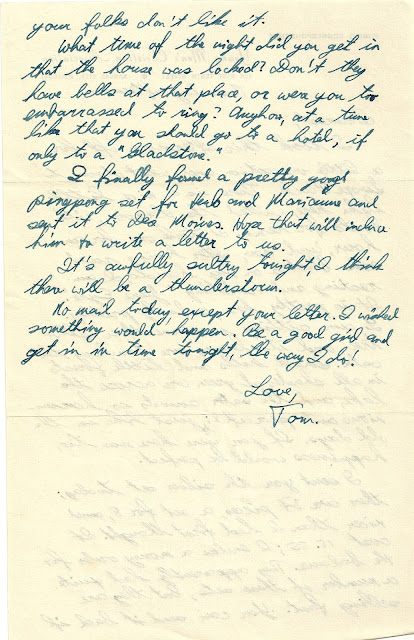 I took this afternoon off for a little vacation and went down to Swope Park. There is a nice little lake here, called the Lagoon, with boats for rent. I took one for an hour, and now, after having rowed some blisters on my hands, I am resting and reading "Jane Eyre." It is pretty here, awfully pretty. I am sitting underneath a willow tree, and its leaves are touching the water. Small hills with little forests in all shades of green are across the lake, and the water sounds so harmonious and peaceful; just like in the old days. If you were here now too, happiness would be perfect.

I sent you the silver set today; there are 34 pieces, a set for 8, and nicer than I had first thought. It cost 15.25; I enclose a money order for the balance. They apparently had quite a number of these sets, but they are selling fast. You can send it back if your folks don't like it.

What time of night did you get in that the house was locked? Don't they have bells at that place, or were you too embarrassed to ring? Anyhow, at a time like that you should go to a hotel, if only to a "Gladstone."

I finally found a pretty good ping pong set for Herb and Marianne and sent it to Des Moines. Hope that will induce him to write a letter to us.

It's awfully sultry tonight, I think there will be a thunderstorm.

No mail today, except your letter. I wished something would happen. Be a good girl and get in in time tonight, the way I do!

Opa took the day off. His June 7th letter spoke of how tired he was, how his sleep was restless because of his thinking about the war and D-day. So today, he took the day off, and he did it in style.

He meandered to Swope Park, which is where the Kansas City Zoo is. At the time, I'm not sure how large the zoo was (it was open), or if the lake was a separate section. The lake is a little circular lake, and from pictures it does look lovely.

Opa spent time on his father's sailboat as a child (likely on the rivers that run through Berlin) and at the beach on the north shore of Germany. For him, water was a familiar and good feeling "just like the old days." The Nazis rendered the beach unwelcoming, and I'm sure his days on the sailboat were fewer as his parents separated, and then none when his Dad moved to Amsterdam.

But the good memories had water: quiet, peaceful, harmonious. Opa reconnected with that feeling, treating himself to a rowboat for an hour, and then reclining under a tree with a book. You can tell what the experience did for his spirit just by the tone of his letter.

He's found a moment of peace.

Sometimes we need a vacation, but it doesn't have to look like a fancy hotel or big trip. We just need to reconnect with the sounds, smells, and views that speak peace to our souls.

For Opa, that's water and the willow tree with leaves reaching down. Don't forget the good book. That all sounds pretty good to me, actually.