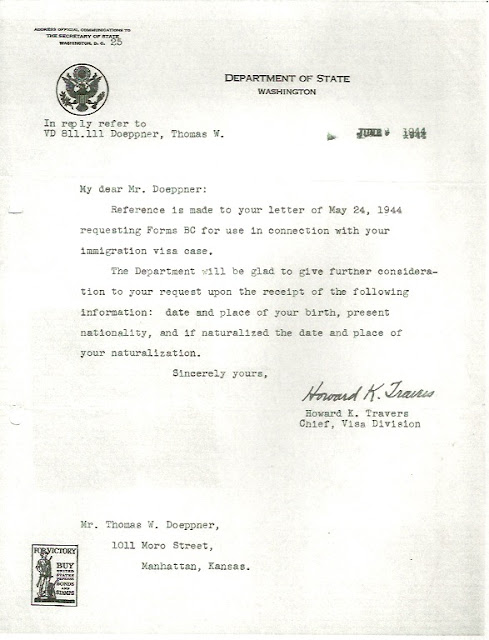 Letter from Howard Travers Chief of Visa Division in Department of State, June 9, 1944.

Reference is made to your letter of May 24, 1944 requesting Forms BC for use in connection with your immigration visa case. 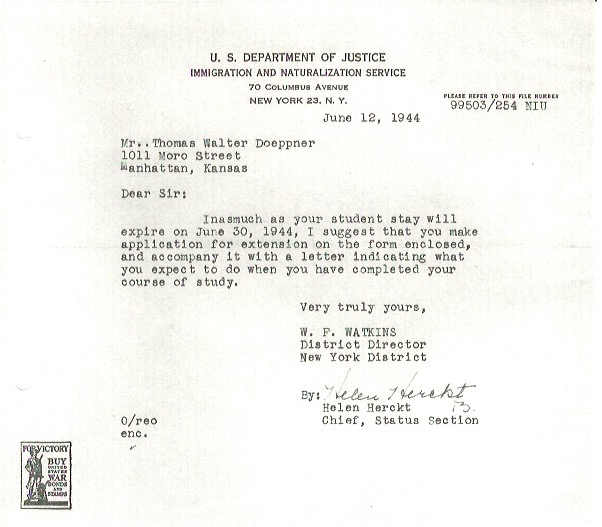 Inasmuch as your student stay will expire on June 30, 1944, I suggest that you make application for extension on the form enclosed, and accompany it with a letter indicating what you expect to do when you have completed your course of study. 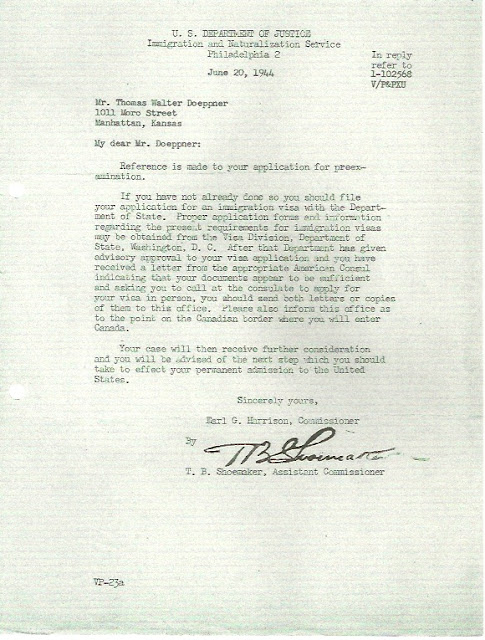 Reference is made to your application for pre-examination.

If you have not already done so you should file your application for an immigration visa with the Department of State. Proper application forms and information regarding the present requirements for immigration visa may be obtained from the Visa Division, Department of State, Washington, D.C. After that Department has given advisory approval to your visa application and you have received a letter from the appropriate American Consul indicating that your documents appear to be sufficient and asking you to call at the consulate to apply for your visa in person, you should send both letters or copies of them to this office. Please also inform this office as to the point on the Canadian border where you will enter Canada.

Your case will then receive further consideration and you will be advised of the next step which you should take to effect your permanent admission to the United States.

These three letters are from three separate offices. Three separate case files, folders, reference points. Immigration is exhausting. Opa is in the process of changing his status in the US from that of his temporary student visa to a more permanent status of a regular immigration visa, with intent to become naturalized in the United States. His graduation from college catapults him to this next step. The current process for this is pre-examination through the Canadian Consul.

If he sends all the right people all the right paperwork and they all give the green lights, he will travel to Canada and obtain the paperwork at the consul and then re-enter the United States on an immigrant visa.

But he still has a lot of papers between now and then. And I'm still not sure he is technically able to become a US citizen while the US is at war with Germany. In a letter to Grandmother, he mentioned that legally the US sees him as an enemy-alien (they only recognize his German origins), but Canada legally recognizes his Dutch ID and therefore he would not fall under the enemy-alien category there. I'm guessing this is what would allow him to re-enter the US, with Canadian "re-branding" as Dutch? I'm obviously not 100% sure. I may end up correcting this blog later on if I find I read it incorrectly.

All this to say: Opa is trying to become an American. It's not easy.
Posted by Sarah Snow at Friday, August 21, 2020