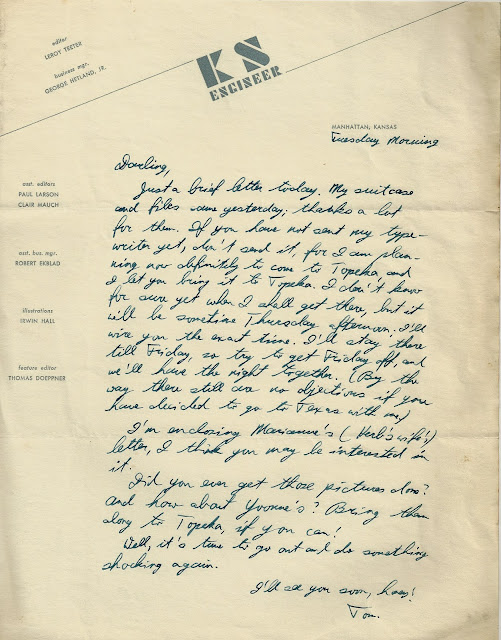 Just a brief letter today. My suitcase and files came yesterday; thanks a lot for them. If you have not sent my type-writer yet, don't send it, for I am planning now definitely to come to Topeka, and I let you bring it to Topeka. I don't know for sure yet when I shall get there, but it will be sometime Thursday afternoon. I'll wire you the exact time. I'll stay there till Friday, so try to get Friday off, and we'll have the night together. (By the way there still are no objections if you have decided to go to Texas with me.)

I'm enclosing Marianne's (Herb's wife!) letter, I think you may be interested in it.

Did you ever get those pictures done? And how about Yvonne's? Bring them along to Topeka, if you can!

Well, it's time to go out and do something shocking again. 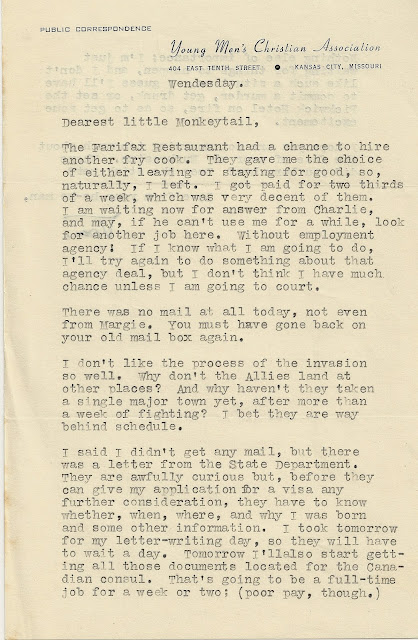 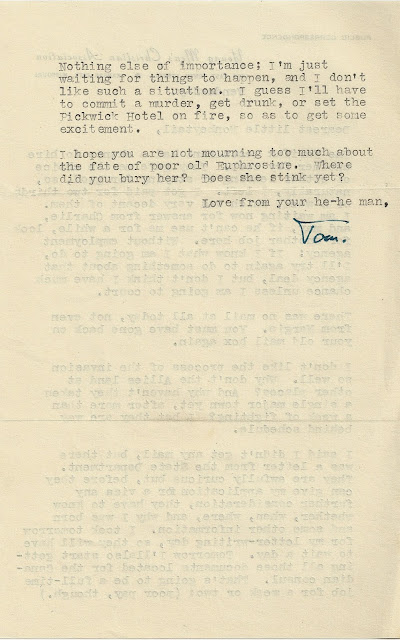 The Fairfax Restaurant had a chance to hire another fry cook. They gave me the choice of either leaving or staying for good, so, naturally, I left. I got paid for two thirds of a week, which was very decent of them. I am waiting now for answer from Charlie, and may, if he can't use me for a while, look for another job here. Without employment agency! If I know what I am going to do, I'll try again to do something about that agency deal, but I don't think I have much chance unless I am going to court.

There was no mail at all today, not even from Margie. You must have gone back on your old mail box again.

I don't like the process of the invasion so well. Why don't the Allies land at other places? And why haven't they taken a single major town yet, after more than a week of fighting? I bet they are way behind schedule.

I said I didn't get any mail, but there was a letter from the State Department. They are awfully curious but, before they can give my application for a visa any further consideration, they have to know whether, when, where, and why I was born and some other information. I took tomorrow for my letter-writing day, so they will have to wait a day. Tomorrow I'll also start getting all these documents located for the Canadian Consul. That's going to be a full-time job for a week or two; (poor pay, though.)

Nothing else of importance; I'm just waiting for things to happen and I don't like such a situation. I guess I'll have to commit a murder, get drunk, or set the Pickwick Hotel on fire, so as to get some excitement.

I hope you are not mourning too much about the fate of poor old Euphrosine. Where did you bury her? Does she stink yet?

Love from your he-he man,
Tom.

Opa has officially quit his job. He doesn't last long in restaurant jobs. Now he's looking for odd jobs until he hears back from the companies who have showed interest in hiring him (for engineering things).

I don't know exactly what happened with this employment agency, but it was bad enough that he mentioned going to court over it!

Opa doesn't like sitting around waiting for things. He's actually managed to always have the next thing, the next project to work on. Now he's in a holding pattern for pretty much everything: the end of the war, word from his family, marriage to Grandmother, job offers, and the ever elusive immigration process.

He does actually have a project to work on: letting the State Department know "whether, when, where, and why (he) was born."