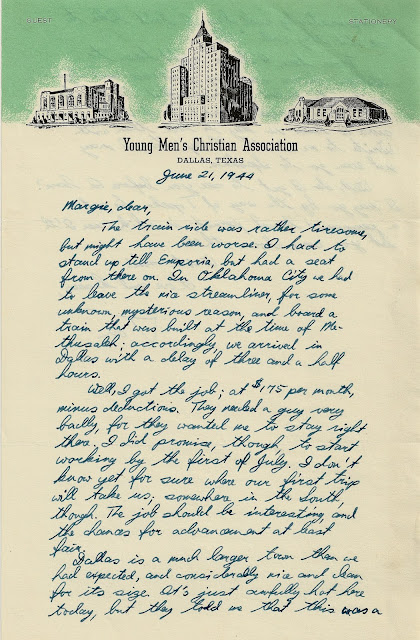 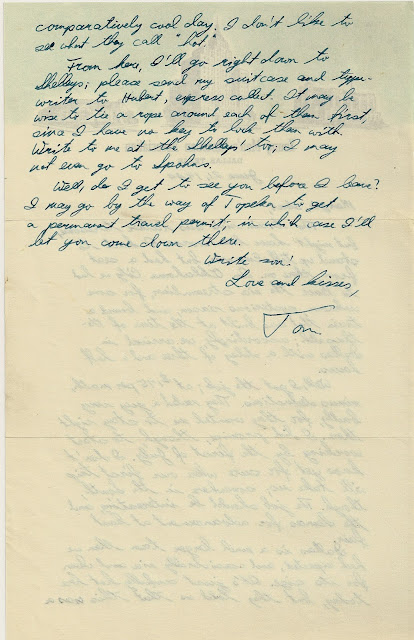 The train ride was rather tiresome, but might have been worse. I had to stand up till Emporia, but had a seat from there on. In Oklahoma City we had to leave the nice streamliner, for some unknown, mysterious reason, and board a train that was built at the time of Methusaleh; accordingly, we arrived in Dallas with a delay of three and  half hours.

Well, I got the job; at $175 per month, minus deductions. They needed a guy very badly, for they wanted me to stay right there. I did promise, though, to start working by the first of July. I don't know yet for sure where our first trip will take us; somewhere in the South, though. The job should be interesting, and the chances for advancement at least fair.

Dallas is a much larger town than we had expected, and considerably nice and clean for its size. It's just awfully hot here today, but they told me that this was a comparatively cool day. I don't like to see what they call "hot."

From here, I'll go right down to Shelley's; please send my suitcase and typewriter to Hubert, expenses collect. It may be wise to tie a rope around each of them first, since I have no key to lock them with. Write to me at the Shelleys' too; I may not even go to Spohns.

Well, do I get to see you before I leave? I may go by the way of Topeka to get a permanent travel permit; in which case I'll let you come down there.

It occurred to me that it is quite possible that Opa's two suitcases (I assume he has one with him too) contain everything he owns, plus the typewriter. He's been in the United States now for almost five years and I bet he still only owns two suitcases worth of stuff.

All the wealth he has collected has been intangible, but valuable. He now has an engineering degree from Kansas State University. He has met his future wife. He has been safe from untold horrible possibilities of what life in Germany would have offered if he stayed. He has friends, fluency in English, and now, a new permanent job.

His job does not pay much but it is a start in his next stage of life in America. He's been a student collecting knowledge and experience, and now he's embarking on his first step towards the grand "American Dream."

It seems he has to travel for work, or at least relocate. What does this mean for Grandmother and Opa? I think she's still in school. This is the beginning of what many folks call "the real world" for Opa. How will he do? I love that he still has a "home" with the Shelley's. They've been such a support and steady place for him since almost the very beginning.