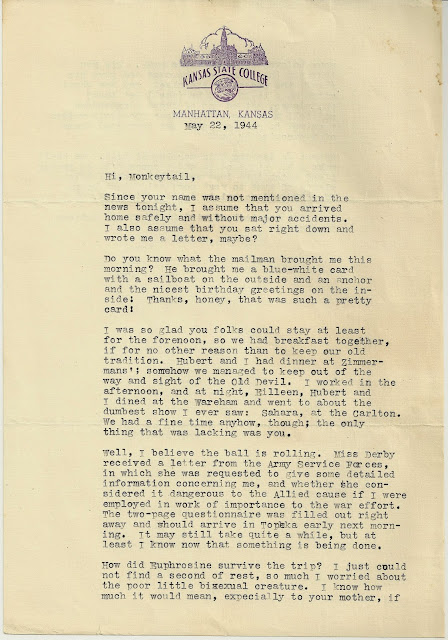 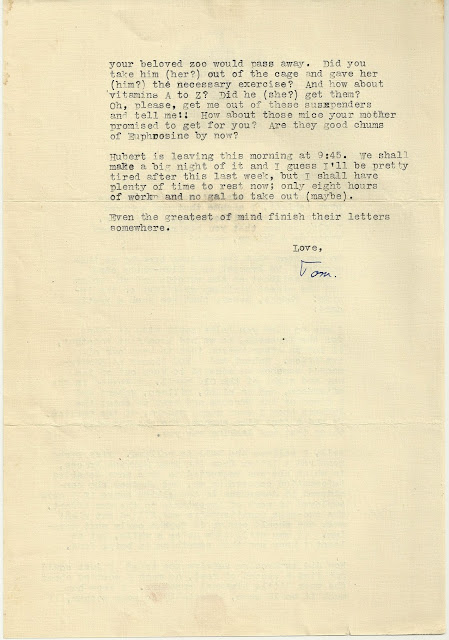 Since your name was not mentioned in the news tonight, I assume that you arrived home safely and without major accidents. I also assume that you sat right down and wrote me a letter, maybe?

Do you know what the mailman brought me this morning? He brought me a blue-white card with a sailboat on the outside and an anchor and the nicest birthday greetings on the inside! Thanks, honey, that was such a pretty card!

I was glad you folks could stay at least for the forenoon, so we had breakfast together, if for no other reason than to keep our old tradition. Hubert and I had dinner at Zimmermans'; somehow we managed to keep out of the way and sight of the Old Devil. I worked in the afternoon, and at night, Eilleen, Hubert and I dined at the Wareham and went to about the dumbest show I ever saw: Sahara, at the Carlton. We had a fine time anyhow, though; the only thing that was lacking was you.

Well, I believe the ball is rolling. Miss Derby received a letter from the Army Service Forces, in which she was requested to give some detailed information concerning me, and whether she considered it dangerous to the Allied cause if I were employed in work of importance to the war effort. The two-page questionnaire was filled out right away and should arrive in Topeka early next morning. It may still take quite a while, but at least I know now that something is being done.

How did Euphrosine survive the trip? I just could not find a second of rest, so much I worried about the poor little bisexual creature. I know how much it would mean, especially to your mother, if your beloved zoo would pass away. Did you take him (her?) out of the cage and gave her (him?) the necessary exercise? And how about vitamins A to Z? Did he (she?) get them? Oh please, get me out of these suspenders and tell me!! How about those mice your mother promised to get for you? Are they good chums of Euphrosine by now?

Hubert is leaving this morning at 9:45. We shall make a big night of it and I guess I'll be pretty tired after this last week, but I shall have plenty of time to rest now; only eight hours of work and no gal to take out (maybe).

Even the greatest of mind finish their letters somewhere.

May 22, 1944 is Opa's 24th birthday. He's been away from home now for 6 birthdays, spending his 18th birthday at home in Berlin just before he left for Holland. He's had five birthdays in the US. Does it now feel normal, or does he imagine what his mother would be doing if she were near? He hasn't heard from her since she last wrote him on November 18, 1943. She has been in Theresienstadt Concentration camp now for four months. I imagine she knows the day is her son's birthday and celebrates in her own way- mentally making note of her love for him.

Opa's mind (at least in this letter) seems focused very much in the present. His fiance has left school for home, not without remembering to send him a nice birthday card. He is working his library job and looking for a full time job post-graduation. The questionnaire from the Army seems to be a step in the right direction; if he wants to work as an engineer, there is a good chance he'll be working on something that benefits the Allied war effort. Opa's funny little jab about Grandmother's "pet" Euphrosine is likely a jab at her fear of mice. Perhaps he joked that a mouse would be following her? No idea- but Grandmother, for as long as I knew her- was deeply afraid of mice. In fact, she had a friend with whom she shared a funny long-running joke. The friend hated birds, and Grandmother hated mice- so all of their correspondence with each other would be on notecards or postcards or even stamps with the offending creature on it. Cracks me up.

Because my husband is funny and feels I should fully immerse in this project, we now own the movie, Sahara. I watched it to see if Opa's assessment of this "dumbest" movie was accurate... it's actually not that bad of a movie. I'm not sure why Opa had such a strong reaction to it. It's pretty typical of most war movies made in the US: an American is brave and the Nazis are evil. There are stereotypes, but I'm not sure if by those standards any movies breached the mold. I don't know why he found it so dumb.

Even the greatest of mind finish their blogs somewhere.
Posted by Sarah Snow at Monday, October 22, 2018