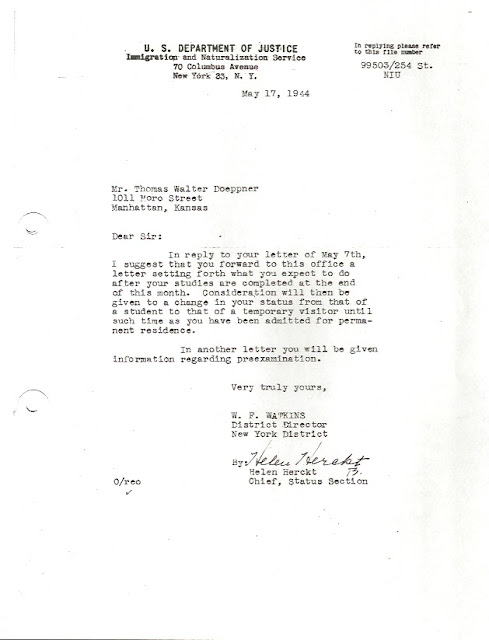 Letter from INS back to Opa

In reply to your letter of May 7th, I suggest that you forward to this office a letter setting forth what you expect to do after your studies are completed at the end of this month. Consideration will then be given to change your status from that of a student to that of a temporary visitor until such time as you have been admitted for permanent residence.

In another letter you will be given information regarding preexamination. 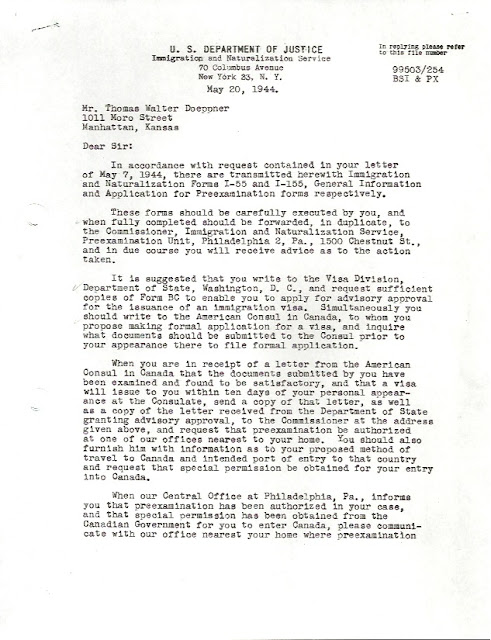 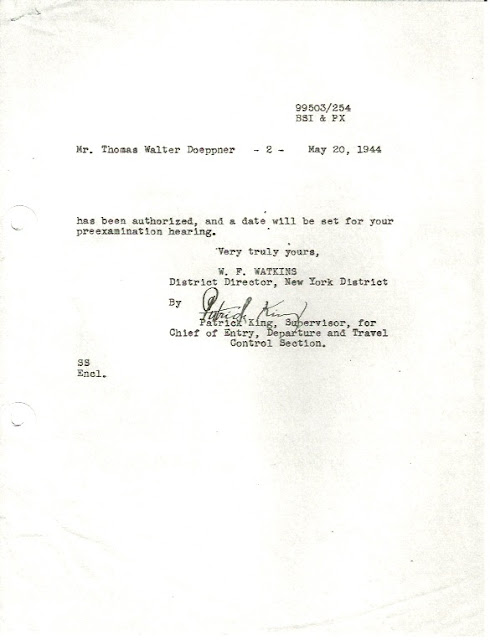 Another letter from INS to Opa

In accordance with request contained in your letter of May 7, 1944, there are transmitted herewith Immigration and Naturalization Forms I-55 and I-155, General Information and Application for Preexamination forms respectively.

These forms should be carefully executed by you, and when fully completed should be forwarded, in duplicate, to the Commissioner, Immigration and Naturalization Service, Preexamination Unit, Philadelphia 2, Pa., 1500 Chestnut St., and in due course you will receive advice as to the action taken.

It is suggested that you write to the Visa Division, Department of State, Washington, D.C., and request sufficient copies of Form BC to enable you to apply for advisory approval for the issuance of an immigration visa. Simultaneously you should write to the American Consul in Canada, to whom you propose making formal application for a visa, and inquire what documents should be submitted to the Consul prior to your appearance there to file formal application.

When you are in receipt of a letter from the American Consul in Canada that the documents submitted by you have been examined and found to be satisfactory, and that a visa will issue to you within ten days of your personal appearance at the Consulate, send a copy of that letter, as well as a copy of the letter received from the Department of State granting advisory approval, to the Commissioner at the address given above, and request that preexamination be authorized at one of our offices nearest to your home. You should also furnish him with information as to your proposed method of travel to Canada and intended port of entry to that country and request that special permission be obtained for your entry into Canada.

Let's get the obvious out of the way first: the first letter was written out by Helen Herckt on behalf of Watkins. She is clear and concise. The second letter was written out by Patrick King on behalf of Watkins, he needs to take lessons from Helen. Patrick is the ultimate government wordsmith, but it is not helpful to anyone. Whew those long sentences and long words!

Back to the letters: it looks like Opa has some real possibility of staying in the country legally and finding a way to become a citizen! First, he has to get a visitor's visa (because his student visa is set to expire), which should hopefully hold him off until he can get the complicated process of re-entering the US from Canada on an immigration visa. That process is very complicated (still is), but Opa has a ray of sunshine in the idea that the visitor visa could hold him until he gets through it.

There is nothing in either letter that indicates that Opa should be concerned about not being able to stay in the United States. Even through all the garbled words, there is hope and a confidence that this process will see Opa to the path of citizenship.

I bet that lifted a huge load off of Opa's shoulders. Right now, everything feels hopeful: he's engaged, he's about to graduate, he's looking for jobs, the big D-Day invasion is about happen- hopefully facilitating the end of the war. The light is at the end of the tunnel. All Opa needed to know is that for now, he can stay in the US.
Posted by Sarah Snow at Wednesday, October 17, 2018