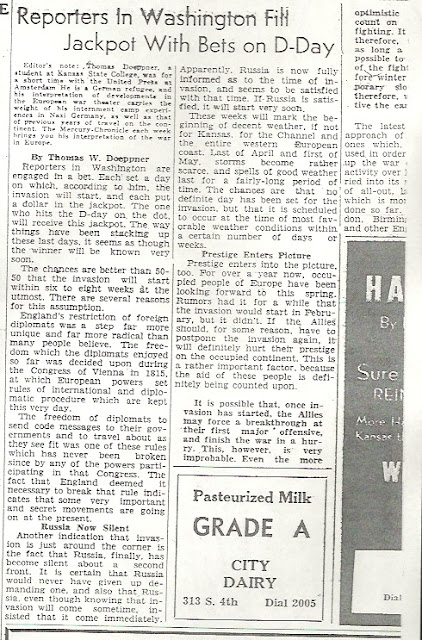 Reporters In Washington Fill Jackpot With Bets on D-Day

Reporters in Washington are engaged in a bet. Each set a day on which, according to him, the invasion will start, and each put a dollar in the jackpot. The one who hits the D-Day on the dot, will receive this jackpot. The way things have been stacking up these last days, it seems as though the winner will be known very soon.

The chances are better than 50-50 that the invasion will start within six to eight weeks at the utmost. There are several reasons for this assumption.

England's restriction of foreign diplomats was a step far more unique and far more radical than many people believe. The freedom which the diplomats enjoyed so far was decided upon during the Congress of Vienna in 1815, at which European powers set rules of international and diplomatic procedure which are kept to this very day.

The freedom of diplomats to send code messages to there government and to travel about as they see fit was one of these rules which has never been broken since by any of the powers participating in that Congress. The fact that England deemed it necessary to break that rule indicates that some very important and secret movements are going on at the present.

Another indication that invasion is just around the corner is the fact that Russia, finally, has become silent about a second front. It is certain that Russia would never have given up demanding one, and also that Russia, even though knowing that invasion will come sometime, insisted that it come immediately. Apparently, Russia is now fully informed as to the time of invasion, and seems to be satisfied with that time. If Russia is satisfied, it will start very soon. These weeks will mark the beginning of decent weather, if not for Kansas, for the Channel and the entire western European coast. Last of April and first of May, storms become rather scarce, and spells of good weather last for a fairly-long period of time. The chances are that no definite day has been set for the invasion, but that it is scheduled to occur at the tie of most favorable weather conditions within a certain number of days or weeks.

Prestige enters into the picture, too. For over a year now, occupied people of Europe have been looking forward to this spring. Rumors had it for a while that the invasion would start in February, but it didn't. If the Allies should, for some reason, have to postpone the invasion again, it will definitely hurt their prestige on the occupied continent. This is a rather important factor, because the aid of these people is definitely being counted upon.

It is possible that, once the invasion has started, the Allies may force a breakthrough at their first major offensive, and finish the war in a hurry. This, however, is very improbable. Even the more optimistic...

(Sorry- the rest of the article is cut off.)

I just realized that I never knew what the "D" in D-Day stood for. Turns out it's just a military way of numbering the days before, on, and after a major event happens. So "D" = Day. D (-1)-Day is the day before, D1-Day, the day of, and so on. This seems weird- but it works for them. The first Day of the Big Day, that's what the reporters are betting on. That's the day that the occupied countries are waiting on. That's the day that Russia has been asking for (as they fight on the Eastern front on their own). D-Day is looming, and there is more speculating than ever.

Things are becoming eerie, the diplomats are no longer allowed to move freely. The Russians have been uncharacteristically pacified. The weather is clearing. The world is waiting.

I thought about who is waiting. Do the people in the camps have any wind of this news? Are newcomers able to bring any hints to the possibility of a break in their nightmare? Are the people of the underground movements detecting a change in the air? Are they preparing for it, or is their business the same as usual in their resistance?

Opa talks about prestige, as if the occupied countries care about prestige. I think it may just be a poor choice of words. But like the Polish underground who don't care if Russians or Unicorns come around fighting against the Nazis; the occupied people of Europe are anxiously waiting for their freedom, from occupation, but ultimately, from war. I can't imagine that they are concerned with the prestige and promises- they want effective action as soon as it can happen.

I watched old reels of the preparation for D-Day on YouTube (isn't technology amazing?!), and the sheer volume of soldiers, ships, airpower, planning is astonishing. In the videos I see the English channel filled with massive ships (which have tanks inside!). I saw the jets, the blimps (had no idea they were still a thing), the smaller boats meant to run ashore, filled to the brim with soldiers like sardines in a tin can.

I can't imagine the fear of the people preparing, sailing, flying on that day. Not only were they running towards the danger, but the entire world was watching.

Reporters made a game of putting money in a pot for the right day, just like we make jokes when things get too serious. I knew, but I don't think I understood the extent to which this specific invasion was a make or break moment in the trajectory of the war. A failed invasion would be a massive blow to the Allied morale. It absolutely HAD to be successful.
Posted by Sarah Snow at Wednesday, October 10, 2018