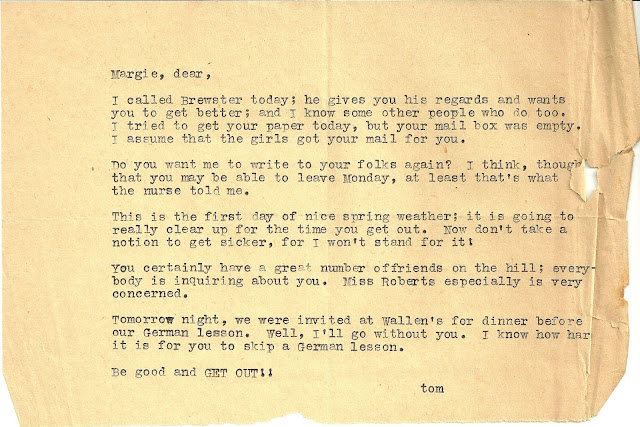 I called Brewster today; he gives you his regards and wants you to get better; and I know some other people who do too. I tried to get your paper today, but your mail box was empty. I assume that the girls got your mail for you.

Do you want me to write to your folks again? I think, though, that you may be able to leave Monday, at least that's what the nurse told me.

This is the first day of nice spring weather; it is going to really clear up for the time you get out. Now don't take a notion to get sicker, for I won't stand for it!

You certainly have a great number of friends on the hill; everybody is inquiring about you. Miss Roberts especially is very concerned.

Tomorrow night, we were invited at Wallen's for dinner before our German lesson. Well, I'll go without you. I know how hard it is for you to skip a German lesson.

Be good and GET OUT!! 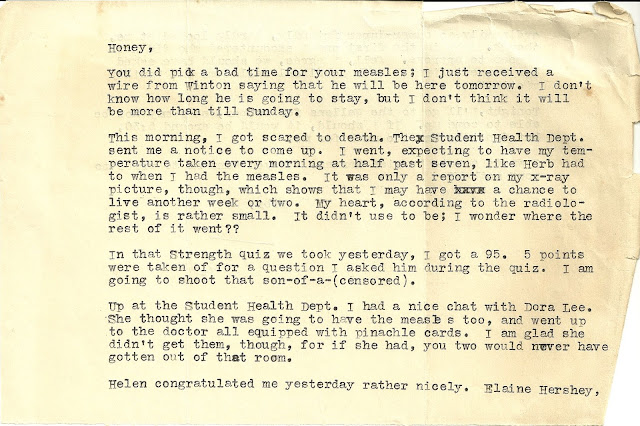 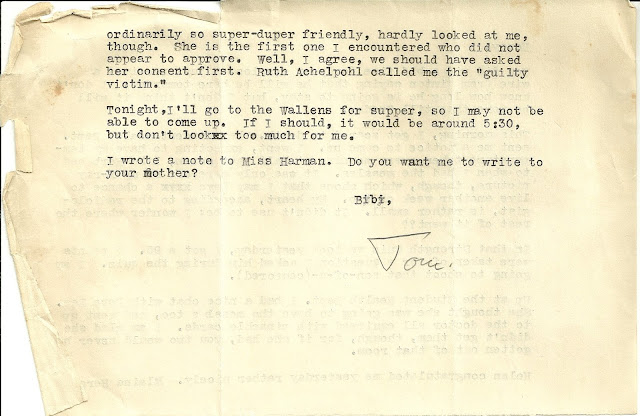 You did pick a bad time for your measles; I just received a wire from Winton saying he will be here tomorrow. I don't know how long he is going to stay, but I don't think it will be more than till Sunday.

This morning, I got scared to death. The Student Health Dept. sent me a notice to come up. I went, expecting to have my temperature taken every morning at half past seven, like Herb had to when I had the measles. It was only a report on my x-ray picture, though, which shows that I may have a chance to live another week or two. My heart, according to the radiologist, is rather small. It didn't use to be; I wonder where the rest of it went??

In that Strength quiz we took yesterday, I got a 95. 5 points were taken off for a question I asked him during the quiz. I am going to shoot that son-of-a-(censored).

Up at the Student Health Dept. I had a nice chat with Dora Lee. She thought she was going to have the measles too, and went up to the doctor all equipped with pinochle cards. I am glad she didn't get them, though, for if she had, you two would never have gotten out of that room.

Helen congratulated me yesterday rather nicely. Elaine Hershey, ordinarily so super-duper friendly, hardly looked at me, though. She is the first one I encountered who did not appear to approve. Well, I agree, we should have asked her consent first. Ruth Achelpohl called me the "guilty victim."

Tonight, I'll go to the Wallens for supper, so I may not be able to come up. If I should, it would be around 5:30, but don't look too much for me.

I wrote a note to Miss Harman. Do you want me to write to your mother?

I believe these notes were passed to Grandmother through the nurses to her confinement. I'm not sure if she's allowed visitors yet, but it does seem that Opa has found a way to visit within the rules of her measles containment.

Opa keeps Grandmother up-to-date with the weather and general daily activity. She's missing a visit from their old friend Winston, and the first days of spring. He is ready for her to join him, but doesn't miss an opportunity to tease her at a distance. He jokes that she would "hate" to miss a German class, and I remember that she said to us that she never could pick up the German language. A linguist she was not.

I loved Opa's response to Elaine's disapproval: "I agree, we should have asked her consent first." Sarcasm is a family trait for me I guess.

Opa keeps asking Grandmother if he should write her folks. I imagine he's trying to balance himself between aloof and too much. He wants them to approve of him, but he may have to hang back and give them a little time to adjust. Do they know that they are engaged?? Who knows what Grandmother is writing or doing in the measles contained room.