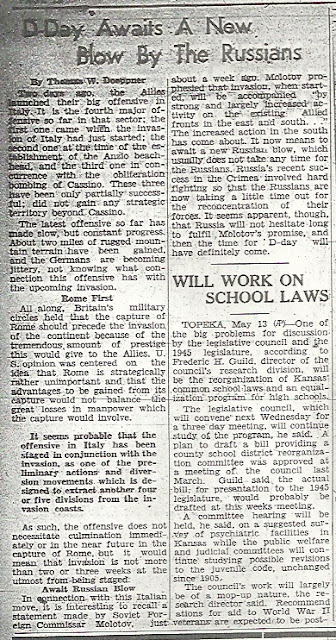 Article by Opa in the Manhattan, Kansas Newspaper: The Mercury Chronicle

D-Day Awaits a New Blow By the Russians

Two days ago, the Allies launched their big offensive in Italy. It is the fourth major offensive so far in that sector; the first one came when the invasion of Italy had just started; the second one at the time of the establishment of the Anzio beach-head, and the third one in concurrence with the obliteration bombing of Cassino. These three have been only partially successful; did not gain any strategic territory beyond Cassino.

The latest offensive so far has made slow, but constant progress. About two miles of rugged mountain terrain have been gained, and the Germans are becoming jittery, not knowing what connection this offensive has with the upcoming invasion.

All along, Britain's military circles held that the capture of Rome should precede the invasion of the continent because of the tremendous amount of prestige this would give to the Allies. U.S. opinion was centered on the idea that Rome is strategically rather unimportant and that the advantages to be gained from this capture would not balance the great losses in manpower which the capture would involve.

It seems probable that the offensive in Italy has been started in conjunction with the invasion, as one of the preliminary actions and diversion movements which is designed to extract another four or five divisions from the invasion coasts.

As such, the offensive does not necessitate culmination immediately or in the near future in the capture of Rome, but it would mean that invasion is not more than two or three weeks at the utmost from being staged.

In connection with this Italian move, it is interesting to recall a statement made by Soviet Foreign Commissar Molotov, just about a week ago. Molotov prophesied that invasion, when started, will be accompanied "by strong and largely increased activity on the existing Allied fronts in the east and south..." The increased action in the south has come about. It now means to await a new Russian blow, which usually does not take any time for the Russians. Russia's recent success in the Crimea involved hard fighting so that the Russians are not taking a little time out for the re-concentration of their forces. It seems apparent, though, that Russia will not hesitate long to fulfill Molotov's promise, and then the time for D-day will have definitely come.

The invasion approaches, and no one can think or talk about anything else. Things are happening along all the fronts, with Germans watching every corner and anxiously waiting for the big invasion.

I feel a little bit like the whole world is under an apocalyptic spell, looking for signs that tell them the end of the world is here. Perhaps what the apocalypse brings depends on who is watching. The Allies see freedom, an end to the war, and hope for a Western/Democratic-controlled Europe (with the exception, of course, of Russia).

Signs start popping up: the Italian front sees a little activity. Though the Allies seem to disagree on the goal (to get Rome, or not, I agree with the US)- there is movement in the South.

Opa wrote that the Russian, Molotov, "prophesied" that there would be movement on all fronts when the big invasion from the west came. I don't think prophecy is the word if it's a plan. However, the world averts its eyes from the south to look East and see when the Russians start moving. The minute the Russians regroup and forge ahead, they'll know the time has come for D-Day.

What are the Germans doing? Are they scared or confident? Do they have their own secret plan or is the plan just to hold ground? Are they sure they can hold off the enemy at every front? This is how you lose a war- by making enemies all around you. That's what the Allies are hoping anyway, and they'll even pretend to like the Russians for a little bit to make it work.