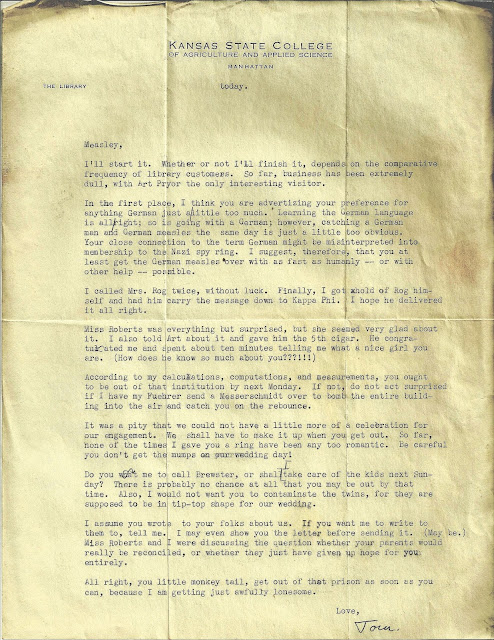 I'll start it. Whether or not I'll finish it, depends on the comparative frequency of library customers. So far, business has been extremely dull, with Art Pryor the only interesting visitor.

In the first place, I think you are advertising your preference for anything German just a little too much. Learning the German language is all right; so is going with a German; however, catching a German man and German measles the same day is just a little too obvious. Your close connection to the term German might be misinterpreted into membership to the Nazi spy ring. I suggest, therefore, that you at least get the German measles over with as fast as humanly -- or with other help -- possible.

I called  Mrs. Rog twice, without luck. Finally I got hold of Rog himself and had him carry the message down to Kappa Phi. I hope he delivered it all right.

Miss Roberts was everything but surprised, but she seemed very glad about it. I also told Art about it and gave hi the 5th cigar. He congratulated me and spent about ten minutes telling me what a nice girl you are. (How does he know so mc about you???!!!)

According to my calculations, computations, and measurements, you ought to be out of that institution by next Monday. If not, do not act surprised if I have my Fuehrer send a Messerschmidt over to bomb the entire building into the air and catch you on the rebounce.

It was a pity that we could not have a little more of a celebration for our engagement. We shall have make it up when you get out. So far, none of the times I gave you a ring have been any too romantic. Be careful you don't get the mumps on our wedding day!

Do you want me to call Brewster, or shall I take care of the kids next Sunday? There is probably no chance at all that you may be out by that time. Also, I would not want you to contaminate the twins, for they are supposed to be in tip-top shape for our wedding.

I assume you wrote to your folks about us. If you want me to write to them too, tell me. I ma even show you the letter before sending it. (May be.) Miss Roberts and I were discussing the question whether your parents would really be reconciled, or whether they just have given up hope for you entirely.

All right, you little monkey tail, get out of that prison as soon as you can, because I am getting just awfully lonesome. 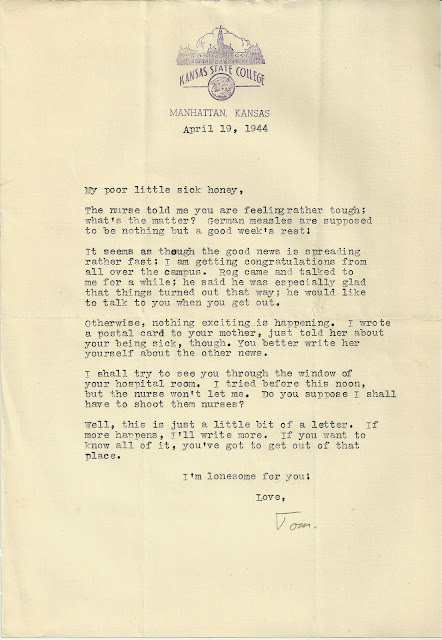 The nurse told me you are feeling rather tough; what's the matter? German measles are supposed to be nothing but a good week's rest!

It sees as though the good news is spreading rather fast; I am getting congratulations from all over the campus. Rog came and talked to me for a while; he said he was especially glad that things turned out that way; he would like to talk to you when you get out.

Otherwise, nothing exciting is happening. I wrote a postal card to your mother, just told her about your being sick, though. You better write her yourself about the other news.

I shall try to see you through the window of your hospital room. I tried before this noon, but the nurse won't let me. Do you suppose I shall have to shoot them nurses?

Well, the is just a little bit of a letter. If more happens, I'll write more. If you want to know all of it, you've got to get out of that place.

I'm lonesome for you! 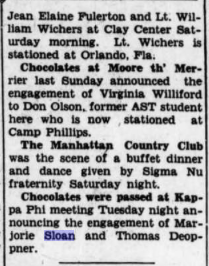 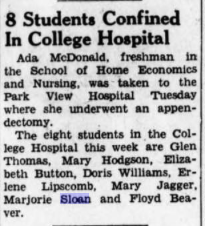 Article Mentioning Students in the Hospital

Ada McDonald, freshman in the School of Home Economics and Nursing, was taken to the Park View Hospital Tuesday where she underwent an appendectomy.
The eight students in the College Hospital this week are Glen Thomas, Mary Hodgson, Elizabeth Button, Doris Williams, Erlene Lipscomb, Mary Jagger, Marjorie Sloan and Floyd Beaver. 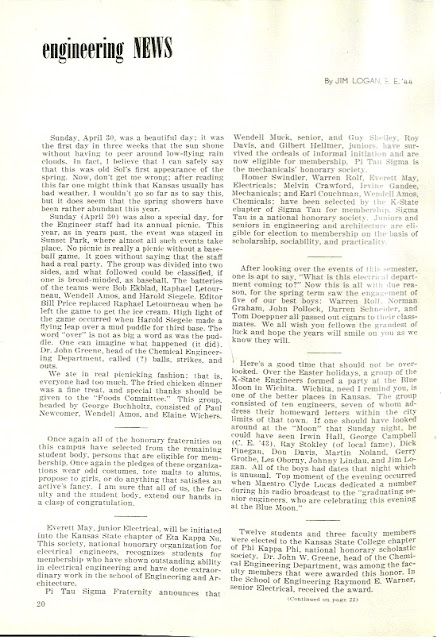 ...
After looking over the events of this semester, one is apt to say, "What is this electrical department coming to?" Now this is all with due reason, for the spring term saw the engagement of five of our best boys: Warren Rolf, Norman Graham, John Pollock, Darren Schneider, and Tom Doeppner all passed out cigars to their classmates. We all wish you fellows the grandest of luck and hope the years will smile on you as we know they will.
...

Opa and Grandmother are engaged! The word is spreading like wildfire across campus with chocolates and cigars being shared. The only ones not together in the celebration are.. Grandmother and Opa! Grandmother is locked away in confinement with the measles at the college Hospital. I'm super sure that the article listing the students in the hospital, including the medical procedure one had- is 100% a HIPPA violation. But I'm guessing HIPPA wasn't a thing then. (Short version: HIPPA = Medical Confidentiality.)

Poor Grandmother! She's missing out on all the fun!

Opa mentions Grandmother telling her parents, and the discussion he had with Miss Roberts (the librarian) about whether or not they will approve. So far Grandmother's parents have not been wild about Opa and his German-ness. For good reason. The country is fighting a whole bunch of them at this moment, they don't seem to be too nice from what people can read in the news, and Opa in particular doesn't even have a guarantee that he can stay in the United States. What if Grandmother follows him to Europe?!

Opa lets Grandmother be in charge of contacting her parents... from the hospital. I wonder if word got to them through the grapevine anyway? Everyone on campus knows!

I think it's a little bit funny that Opa keeps writing to Grandmother as if she's on some spa trip. I know it's all tongue-in-cheek meant to cheer her up. It's a good thing she shared the same sense of humor.

Oh Happy Engage-measles to the both of them!
Posted by Sarah Snow at Tuesday, October 09, 2018