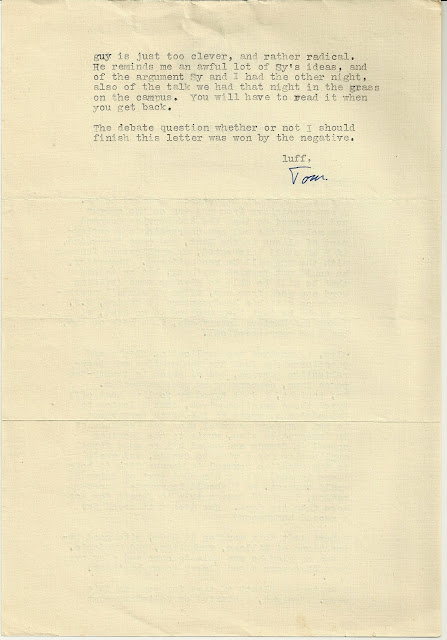 Several things of importance happened today. A representative from RCA was on the campus and informed me that the 2nd Service Command has relaxed the ruling concerning the employment of aliens in the East, and that therefore, if I am still interested, my application for work with the RCA will be reconsidered. Naturally, he could not promise anything, but he thinks that he will be able to give me some definite word one week from now, after an airmail correspondence with his headquarters in Camden, N.J. It might be that they want me to go east, at least for further interviews, in a week or two, but I am very skeptical.

Also, I received two application blanks and questionnaires from the Immigration and Naturalization Service, one of which is twenty-two pages long, concerning my pre-examination. So, tonight, I just typed my foolish head off; typed those questionnaires, sent a letter to Philadelphia, wrote to the State Department to get advisory approval for the issuance of an immigration visa, wrote to the American Consul in Canada and asked him to make formal application for a visa to Canada, and wrote to the Canadian Consul in Kansas City (I hope there is one) asking him what port of entry he would suggest. If I should be granted pre-examination, it would mean a trip to Canada for not more than ten days. How does that sound for a second honeymoon?

Hubert left this morning at 9:45, with good impressions of Eileen, Manhattan, and Marjorie. I was so glad he was able to come and stay over; this gave some added flavor to my birthday.

I am taking plenty of time for reading this week. Tonight, I started on Voltaire; that guy is just too clever, and rather radical. He reminds me an awful lot of Sy's ideas, and of the argument Sy and I had the other night, also of the talk we had that night in the grass on the campus. You will have to read it when you get back.

The debate question whether or not I should finish this letter was won by the negative.

Opa has a lot happening at once, but most of it seems to be good things. He's got a bone from the RCA company, saying they'll consider him for employment. He has his correspondence from the INS with the next steps in his complicated path to citizenship. (I love that he forwarded the information to Philadelphia, I'm assuming to the headquarters of AFSC, who are still keeping tabs on him.) His fiancé sent him a birthday card. And Opa got to spend time with one of his dear friends Hubert Shelley (from his days at McPherson College), who just left.

The card from Grandmother did remind me that this would likely be the first year that Opa did not receive a letter from his Mom or anyone in his family on is birthday. He doesn't seem to be dwelling on that. Either he isn't thinking about it, or I suspect, he is keeping that grief to himself. Sometimes writing something down makes it a little too real.