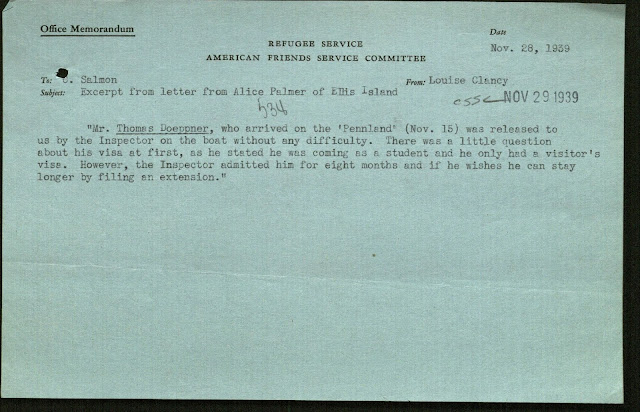 "Mr. Thomas Doeppner, who arrived on the 'Pennland'(Nov. 15) was released to us by the Inspector on the boat without difficulty. There was a little question about his visa at first, as he stated he was coming as a student and he only had a visitor's visa. However, the Inspector admitted him for eight months and if he wishes he can stay longer by filing an extension."

This document was sent out as a memorandum in the American Friends Service Committee (AFSC) office. I imagine everyone already knew this information, but it was a way to formalize the entry of one of their clients into safe haven. This also confirms that Opa entered the United States on a visitor’s visa, and he must apply for an extension before his eight months is up. I bet Charlotte was already working on it. Unfortunately, it’s just one more detail that makes Opa’s stay in the United States a little more tenuous.
Posted by Sarah Snow at Sunday, July 19, 2015