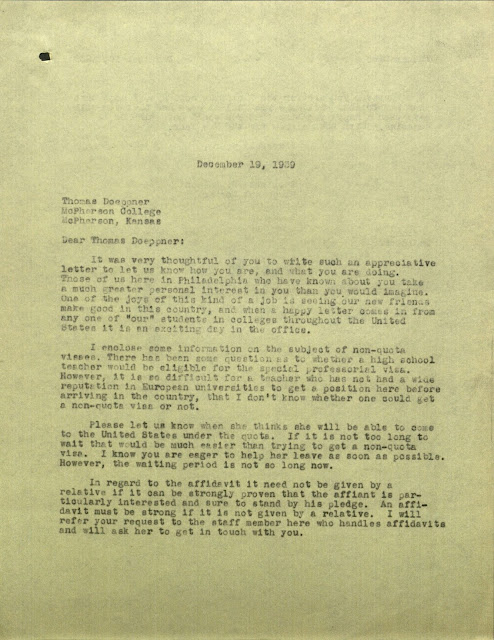 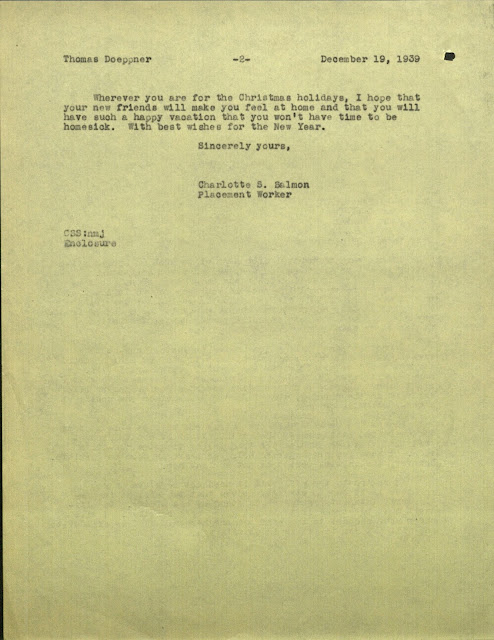 It was very thoughtful of you to write such an appreciative letter to let us know how you are, and what you are doing. Those of us here in Philadelphia who have known about you take a much greater personal interest in you than you would imagine. One of the joys of this kind of job is seeing our new friends make good in this country, and when a happy letter comes in from any one of "our" students in college throughout the United States it is an exciting day in the office.

I enclose some information on the subject of non-quota visas. There has been some question as to whether a high school teacher would be eligible for the special professorial visa. However, it is so difficult for a teacher who has not had a wide reputation in European universities to get a position here before arriving in the country, that I don't know whether one could get a non-quota visa or not.

Please let us know when she thinks she will be able to come to the United States under the quota. If it is not too long to wait that would be much easier than trying to get a non-quota visa. I know you are eager to help her leave as soon as possible. However, the waiting period is not so long now.

In regard to the affidavit it need not be given by a relative if it can be strongly proven that the affiant is particularly interested and sure to stand by his pledge. An affidavit must be strong if it is not given by a relative. I will refer your request to the staff member here who handles affidavits and will ask her to get in touch with you.

Wherever you are for the Christmas holidays, I hope that your new friends will make you feel at home and that you will have such a happy vacation that you won't have time to be homesick. With best wishes for the New Year.

Charlotte Salmon gave me your letter of December 15th with regard to the questions you have about the immigration of your mother. The most important thing for us to know before we can decide if we can be of assistance to your mother is the date of her registration with the American Consul. She would not be eligible for a non-quota visa, unless she has taught on some university faculty during the past two years- uninterruptedly. High schools in general employ only citizens and if the refugee is not so outstanding in his or her line of teaching, there is very little hope for finding a place.

Affidavits are preferable from relatives. The Consul puts much more importance on an affidavit from relatives, even though the financial backing may be much smaller than another one given by a friend because he apparently feels that blood ties are generally more reliable than friendship ties. However, if friends of yours are giving not only a good affidavit - which means with financial backing - but also writing letters to the Consul that they are genuinely interested in helping your mother and feel a strong responsibility in doing so, the Consul might be satisfied.

For your own interest I am enclosing some mimeographed material about affidavits. It is difficult to say what amount an affidavit must be because the different consuls have different opinions about this point, but the more money the better it is. If you know of someone who would not be able to give a strong affidavit, you perhaps could find several people who would be willing to give affidavits, which in itself would not be strong enough but together may be considered by the Consul.

There is nothing else which you can do to get your mother into the United States of America as soon as possible. The most important thing is her registration date. Also if and when she is able to come, somebody in this country would have to take care of the passage money, as the passage is to be paid in dollars as you may know.

As soon as you write us in more detail about your mother's situation, we probably will know better if and how we can be of assistance to her. Also write us her address, so that if necessary our representatives in Berlin can go to see her.

If you look back at the letters from Ella to Opa, she wrote a letter on December 19th saying that she hadn’t heard from him and was longing for word. Little did she know that he was not only writing to her but also writing on behalf of her. Mail in and out of Germany was being monitored and delayed, which probably aggravated Opa to no end.

In the USA, mail was running smoothly, so Opa was able to correspond easily with the American Friends Service Committee (AFSC) and get a quick response. Opa’s original letter received two initial responses: the first letter which acknowledged his request and thanked him for sharing his heart-warming happiness, and the second letter was from a person who began working on the case for Ella’s immigration.

These two letters are kind of like night and day. They were sent 10 days apart and likely received about that far apart. After the first letter I would have felt quite optimistic. Then comes the second letter. It’s kind of a Debbie downer. Something that becomes clear from that letter is that Ella’s date of registration (and number I guess) is extremely important. If you remember from my last blog, the date of registration and her number were essentially her place in line to get out of the country. The “quota” we have been talking about was a set number of folks who were allowed to immigrate into the USA from a certain country. Your registration number indicated where you were in the line of people attempting to gain entrance to the US.


The first letter, from Charlotte Salmon, opens a window into the thankless job of the AFSC social workers. They were so encouraged by any positive report, that a happy letter makes for an exciting day for the whole office. I have been a part of projects that seem daunting, but never have I had a job or a position in which my work everyday is to pick at a giant brick wall with a tiny tweezer and hope that something is making a difference. That is how I imagine the work of any social worker is, and in this case, the ones who worked to help German refugees enter the USA safely. The system was not set up to make it easy, so when they had success and the person was happy - that had to have been exceedingly heart-warming. This warmth was infused throughout Charlotte’s letter. Charlotte seemed to be flying on this happy cloud that was a success story of a German Jew saved. She wished Opa a happy Christmas and New Year, sent him some affidavit information and was encouraging the whole way.


The next letter, from Annaliese Thieman, is a little more business-like. It isn’t negative, but it isn’t bubbly either. Annaliese’s second statement is a little unsettling: “The most important thing for us to know before we can decide IF we can be of assistance to your mother is the date of her registration with the American Consul.” The all-caps for “IF” is mine, but seriously, all I could hear was the evil stepmother from Cinderella: “IF you finish your chores… you can go to the ball.”

Well, shoot. It seems like everything hangs on this minor detail. That seems very tenuous. She pretty solidly shoots down the non-quota visa idea, so that it is clear that everything really does hang on the registration number/date. Non-quota means Ella would get to skip to the front of the line and try to enter the USA based on her professional expertise, but it seems a High School teacher wasn’t what this type of visa was reserved for. Then Annaliese pretty much tells Opa it would be preferable if he could create some family out of thin air, because family affidavits are better. But, in case he can’t- she says: get as much support and as much money as you can. That will only increase your chances.
“There is nothing else which you can do to get your mother into the United States of America as soon as possible. The most important thing is her registration date…”


So now Opa gets to wait for the wonky mail to work with Nazi censors and militarized waters. Because the most important thing is finding out: What is Ella’s registration date?